In September 1852 young Scottish plant hunter John Jeffrey came across an attractive flowering plant in northern California. After samples were received by his sponsors at Royal Botanic Garden Edinburgh it was named in his honour. 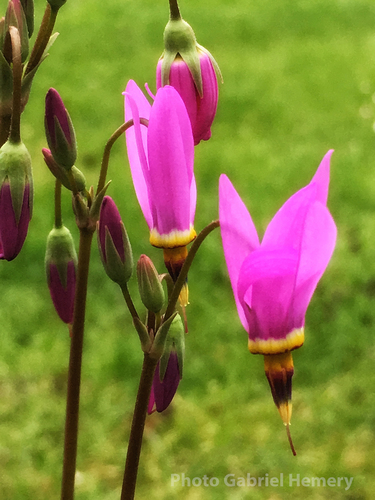 Jeffrey's shooting star (Dodecatheon jeffreyi) is also known as Sierra shooting star or tall mountain shooting star. Its glowing pink flowers, which appear between April and June, look like shooting stars with their swept-back petals. They are held aloft on long slender stems above a rosette of wrinkled oblong leaves. This plant becomes dormant immediately after flowering. It prefers shade or partial sun, and medium moisture. Its spring flowers and early season dormancy makes it a perfect companion among perennials which emerge later in the garden, particularly among a rock garden or meadow.

The flowers of Jeffrey's shooting star were considered to bring good fortune by some native American people, who used them as love charms. It is one of only a few plants that is fertilised thanks to 'buzz pollination' where the plant releases pollen when stimulated by the wingbeats of a bee.

I have grown some plants myself (note that seeds are included in the 'Green Fingers' pledge level), and I've made a short film for you showing them now in full flower, accompanied by me reading from John Jeffrey's [fictional] journal entry.

Thank you very much to those who have supported the book. I am delighted it has already reached 10% funded. Please do mention it to your friends as the sooner we reach 100%, the sooner the book willl be in your hands.