Gifting a voice beyond the grave

Now I've completed the draft of my first full-length novel—a work of historical fiction—I feel as though I travelled alongside my protagonist as he walked thousands of miles across North America in search of plants. Yet I went on a very real journey myself, learning about Victorian exploration, the wildernesses of North America, the Gold Rush, and Native Americans. Then further challenges came from attempting to master the art of structuring a novel, melding fact with fiction, and managing detailed research over the span of two years.

With these new experiences fresh in my mind I was intrigued to learn that Hilary Mantel was due to deliver the respected BBC Reith Lectures of 2017. As author of the award-winning and two-thirds completed trilogy I looked forward to the opportunity of hearing the voice behind these celebrated books, and I was lured by the BBC's smooth trailer which talked of how "The art of fiction can give the dead fresh life".

It's a good listen (available on the BBC iPlayer) and of course Mantel phrased this concept with a little more aplomb and subtly different meaning. She said:

"The dead can become active among the living."

During Lecture 2 Mantel discusses the sometimes uncomfortable relationship between historians and novelists, of the responsibility of novelists to research thoroughly and to own up to invention. Yet historical fiction can complement the work of historians, not offering an alternative, but offering insights which may be accessible to more people.

Biographical fiction is a popular genre. I learnt early on during discussions with publishers that these two terms reversed, as in 'fictional biography', is most definitely an inappropriate term, suggesting a loose connection with fact rather than carefully-researched fact underpinning an imagined fiction. For my new book GREEN GOLD I worked hard to research fact, discovering an expected benefit in that this often stimulated fiction, leading me in unexpected directions. In the book I've been methodical in clearly indicating to readers what is fact or fiction, as without this clarity it may often be difficult to discern (either way).

Some historical or biographical fiction feeds familiar fantasies, led no doubt by knowledge of what sells. Yet this genre doesn't have to flatter or extend common fallacies, it can challenge and bust myths. There is another and intriguing dimension to consider here, where fact may appear stranger than fiction. In my photography I am intrigued by images which capture visions that if drawn by an artist would not only confuse the viewer, but even lead to them to question the ability of the artist to capture life accurately (here's one recent example).  Returning to the art of writing fiction, consider this extract from GREEN GOLD:

" . . . he says the only satisfaction you can get out of a fellow of that kind is to come out here and shoot him through the navel with a Mississippi Yangur, nobody will say anything to you; or if there is an investigation it will be brought in justifiable homicide. There was an advertisement in one of the papers the other day, somewhat part of this fashion––

The publication of the Police Gazette will be postponed for a month in consequence of the assassination of the Editor.

Them’s not the words, but them’s the sentiments. Cool, isn't it?"

Does this sound like authentic Victorian prose from a letter between two brothers? You may be surprised by the inclusion of 'cool' for instance. Yet, this letter was written by William Murray in San Francisco, to his brother Andrew in Edinburgh, in May 1854. Andrew Murray was Secretary to the Oregon Botanical Association which sponsored John Jeffrey as their plant collector, and I found this letter in the archives of Royal Botanic Garden Edinburgh. It challenged so many assumptions—and if I'm honest prejudices—of my own when I started research for my book. 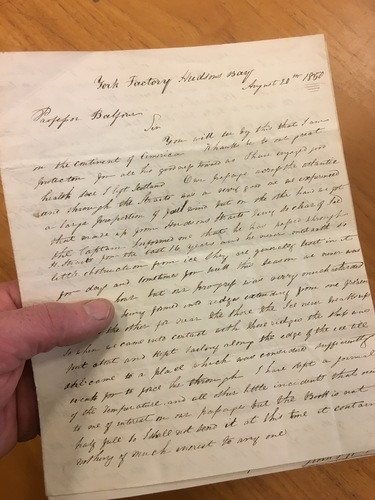 "Seek out gaps, as these offer opportunities for creativity", suggested Mantel to fellow authors in her lecture. I recognise this as the element which drew me towards my first biographical fiction novel. A young Victorian plant hunter is despatched to North America and formally contracted to keep a journal, yet despite letters and plant specimens (400 no less) arriving home, no journals ever surfaced. We know where he went and what he found, but what did John Jeffrey actually experience as he walked, paddled and rode more than 10,000 miles in search of plants for rich investors back in Britain? The landscapes, effort and plant hunting alone stimulates the imagination, but consider too that Jeffrey travelled south against the flow of the 49ers fanning out north from the dwindling Californian gold fields.

I was drawn to the untold voice, a story unknown. I realised that if I were to 'discover' John Jeffrey's journals, and imagine his words, I could play my own small part in helping the dead become active among the living. I hope botanists don't rattle their vasculums, nor prospectors clatter their pans, in protest at my own invention of history when they get their hands on GREEN GOLD.