At Klamath Falls there was a great gathering of Indians, apparently from several tribes, given the varieties of costume and appearance on display. They were all there for a common purpose however; to gather lampreys.

The only lamprey I have seen in this country before now was firmly attached to the flanks of a large brown trout. I caught two-for-one on a makeshift line sometime last year in Oregon. Then an absence of any real hunger got the better of me and I fear my eyes won over my belly. The sight of its sucker mouth, complete with its double razor-sharp fangs, made me foolishly squeamish and I threw it back into the river. I admit my actions embarrass me now, not only for wasting precious food but for inflicting its teeth upon another fine fish. It was perhaps 20 inches in length. 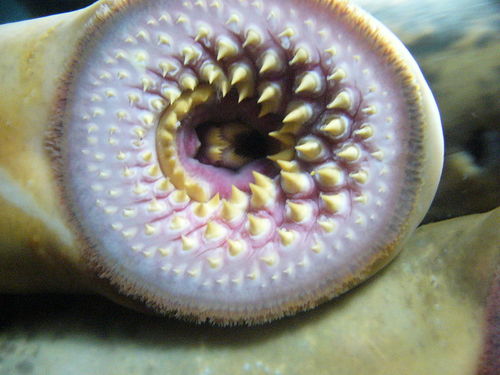 The young men and boys stand right against the raging waters, reaching into the most turbulent currents with wooden hooked spears, with which they try to bring out the lamprey. Others watch the rocks as these curious fish, not unlike an eel, will swim against the flow and then attach themselves to the rocks with their mouthparts, before continuing their upward journey. I tried my hand at the first technique and had no luck at all, but I harvested many from the rocks. I saw one attach itself to the back of a boy crouching amid the current but a companion pulled it off and threw it into his basket before it left much of a mark.

There seems to be no limit to the numbers of these fish which the Klamath call ‘gawi ’. We left the falls two days ago with two baskets, which Kowe had brought with him, filled to their very brims with fish. Our arrival at the settlement this afternoon was well received, the sight of our gawi harvest bringing much joy before leading to a flurry of activity. Kowe’s father spoke to me, in words I did not understand, yet I felt the measure of his pleasure at our safe return. Lily-Wokas seemed equally relieved and I was pleased by her ruddy appearance, the paleness in her face long gone.

A great feast of lampreys was prepared. The fish were split in two using bone awls and each fillet folded like a concertina and threaded onto giant skewers. These were placed upright into the ground around the fire to cook in the heat and smoke.

Their flesh was indeed very good once I banished the thought of their mouthparts from my mind. I remembered a history lesson from school and the story of Henry I, if I remember rightly, who died from consuming an excess of lampreys. So here I am in Oregon––God’s own country––married to a beautiful woman and father to her daughter, feasting like a King!