Writing between the lines.

I hadn’t planned to hand-letter a book anytime soon. Honest. I’m only now figuring out how to design a comic-book typeface that doesn’t go splat when I use it on a page. Hand-lettering was just something I occasionally practiced so I could feel this imposter syndrome all the cool kids were talking about.

What led here was a brash overstatement that Anand and Ram took at face value (for their own eeeeevil ends). I’d been seeing pages for Grafity’s Wall coming in, and I asked Anand what he was using to draw the book. “Gel pen on cartridge paper,” he said.

“So,” I said, “wouldn’t it be fun if I lettered the book with a gel pen on cartridge paper?”*

* Flash Fact: Cartridge paper is so named because it was originally used to make gun cartidges.

Everyone thought that it would, in fact, be fun, and decided that was exactly how the book should be lettered. I was massively sceptical, but decided to give it a go, always with digital lettering parked outside the door with the engine on. 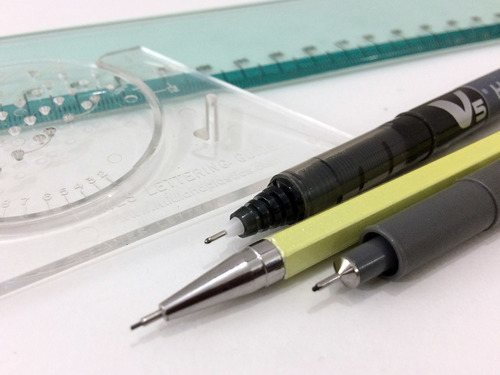 I did a few tests in both uppercase and mixed case. Uppercase, while adequate, didn’t have the loose energy the book needed - specifically my uppercase, which I still draw stiffly with my tongue stuck out and my brow furrowed in concentration because I tend to get the spacing disastrously wrong if I don’t. On the other hand, I felt comfortable about my mixed case, which I’d derived from my regular writing style, so I didn’t have to force my hand into alien contours as far as possible. 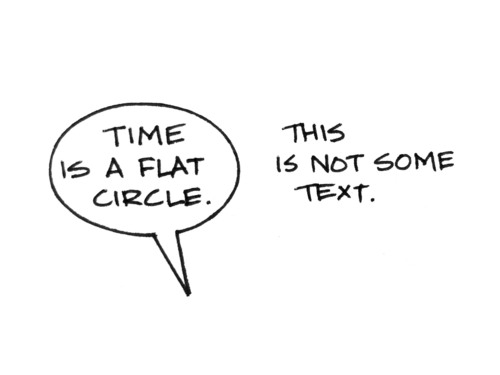 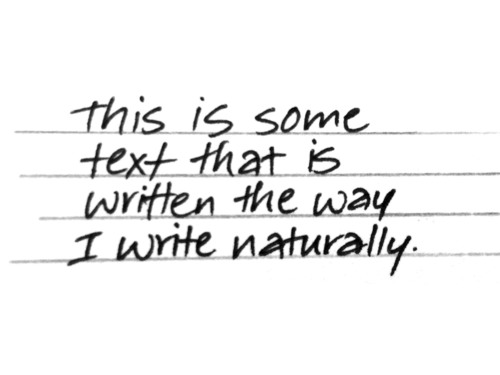 Next, I ran through a few sizes to settle on a size that’d both look good printed and that I could work at. We settled on the 4mm style on the top-left, which looked neat but not too stiff. Here, I ran into my biggest problem. This would require a brief primer on how hand-lettering is done in comics. 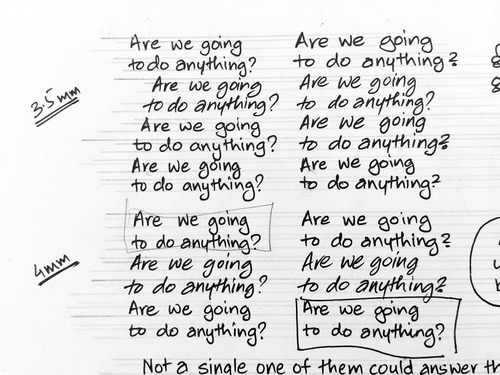 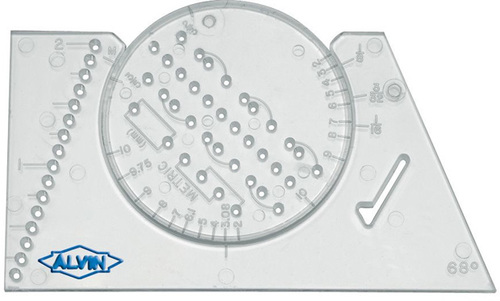 The most essential instrument for a hand-letterer is an Ames Lettering Guide.* If you’d like to see it in action (or if you already know the basics and would like a deeper dive), you can read this detailed article about it and skip the next paragraph. Otherwise read on.

* A penman called Daniel T. Ames wrote a book called Ames’ Guide to Self-Instruction in Practical and Artistic Penmanship in the 1880s, available here, which deals with lettering. I’m going to assume the instrument was named after him.

Mixed case lettering involves four elements to do with height: the x-height, ascenders, descenders and line spacing (or leading). The 2:3 scale lets you draw guidelines for the first three elements, while you eyeball the leading. Here’s what that looks like.

This looks pleasant enough, and if I were lettering an entire page of pure text, I’d be pretty happy doing it like that. The problem emerges when you try to use this to letter a comic. There’s entirely too much space between the lines, to the point where it looks ugly: 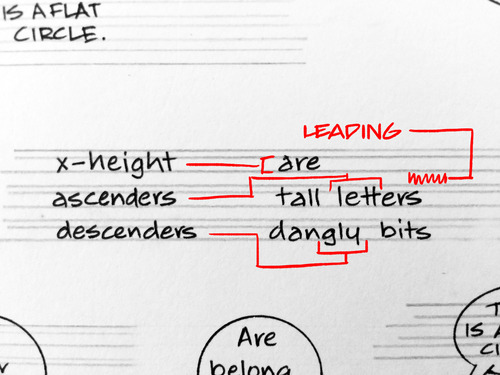 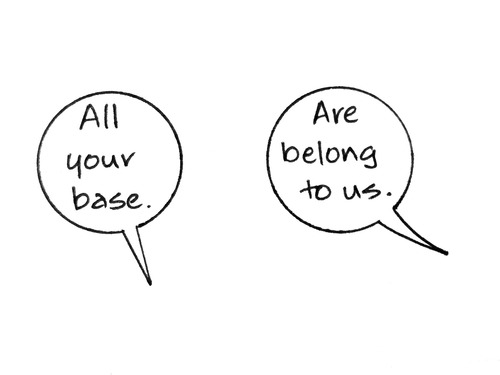 When I letter digitally in mixed case, I first reduce the leading to the lowest possible, and second, I manually adjust line height for lines without ascenders and/or descenders to make the lines flow better within the balloon.

To do that here, I would have to letter ‘wrong’ on paper and fix all of these digitally, which would be a) time-consuming, and b) a workaround rather than a solution. Also, I wouldn’t be able to trust the balloons I drew around the text because the size of the text would change.

I realised I needed to ignore how digital lettering functions, and look at the work of my favourite hand-letterers working in mixed case, and try to reverse-engineer it. So that led me to spend a few hours poring over the work of John Costanza, Gaspar Saladino and Darwyn Cooke.* 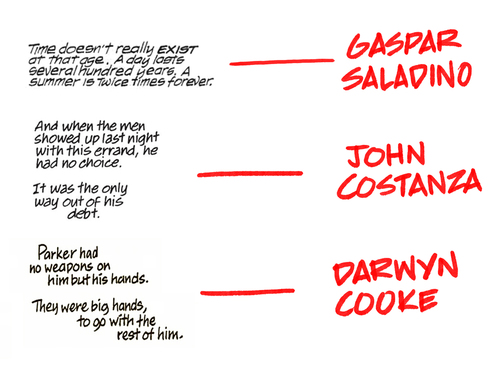 * Have I mentioned I love my job?

First, I noticed that in all three, the descender of one line and the ascenders of the next occupy the same vertical space. There is no traditional ‘leading’. Which meant I’d need to get rid of my 2:3 ratio.

Secondly, Costanza and Cooke use a high x-height to maintain readability while reducing ascenders and descenders (particularly the latter) to the bare minimum necessary. Learning to draw shorter, more suggestive descenders like them would improve both readability and elegance.

The rest, Costanza made me realise, was pure skill. The only way to avoid intersecting lines was to draw them so they never touched. The ascenders and descenders would need to go on a careful little dance, one I could only do in hand-lettering, because I’d be drawing each and every letter live so it could react to the letters around it. This was my Eureka moment, when I knew I had to hand-letter this book and put this into practice.

I went back to my drawing board, and dumped the Ames guide’s x-height measure, instead drawing guides the way I used to for uppercase lettering. And thankfully, the research worked, because it looks nice and snug in the balloons themselves. 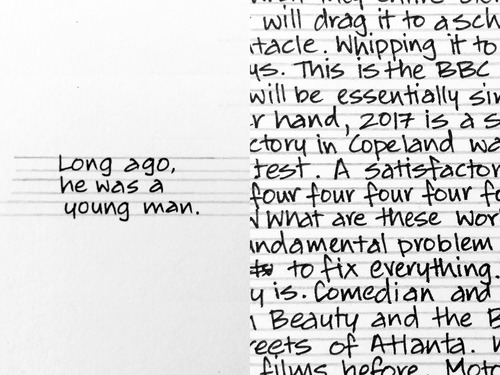 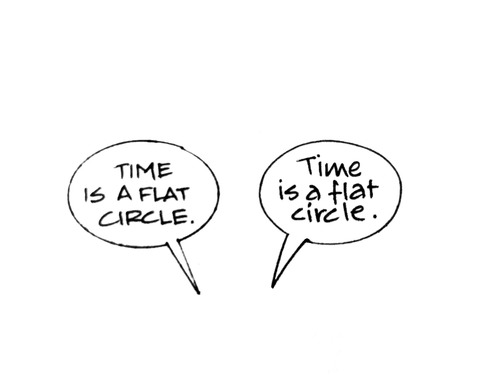 That's all I've got for you today, folks. You might say this was a lot of work to put into doing one book, when I could easily have done it a lot quicker digitally. But this, for me, is where my work comes alive, where I'm tackling something new and exciting with people I enjoy working with who let me mess around. This is where I can come out and play with my friends. My hands are dirty with ink stains and my desk looks like a fingerpainted canvas - and it's awesome!