When we began this campaign we said we'd take you along for the ride as we create this book. We promised process posts and videos. Anand, in his Mumbai flat, dusted off his old tripod and set up a high-end camera that he regularly forgets to turn on when he's drawing things. Bidikar is hand lettering the whole comic. So, when he emerges from the recesses of his studio at the end of this process, like some sort of Vault-dweller, we'll be lucky if he still remembers what talking to another person feels like. And we've inundated Irma with so much tinkering and tweaking on each coloured page, I fear she'd resort to violence if I asked her to write up a process post.
So it falls to me to make this first post about The Making of Grafity's Wall. It's okay, guys, I got this. 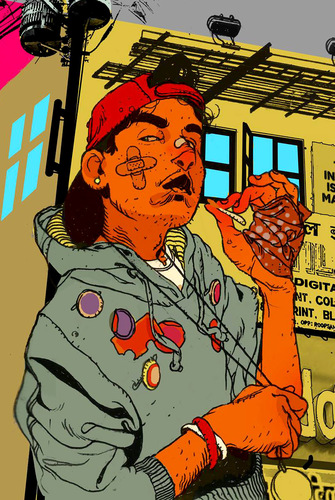 I suppose it's apt to begin where most stories begin- as an idea. And the idea for Grafity's Wall, comes from a stray thought I had at a talk by street-artist and muralist, Triston Eaton. http://tristaneaton.com/about/

I don't remember what event the talk was a part of anymore. I remember only that we (my wife, her friend and myself) decided to attend because a stranger at the door asked us if we wanted to listen to a talk about street art. We walked in on a whim, sat down on concrete steps by the door despite the empty seats.
Tristan began his talk with the idea that street-art was really born out of rebellion. To create art in places where it was forbidden. To steal power through expression on surfaces in sanitized and manicured places. I thought of Mumbai and the rare examples of graffiti that I'd seen, growing up in the city. I thought of obscure wisdom scrawled in magic marker on men's room walls. Misspelled patriotism on the backs of long-haul trucks roaring down stretches of empty highways. Moustaches on heroines in Bollywood posters and remnants of flyers for B-grade horror flicks, torn from the walls by some outraged citizen. I thought of my own teenage rebellion. My college days, cutting classes, sneaking away to eat street-food or just spending hours with friends in the parking lot outside the university building. The brooding wardrobe. The cheesy poetry.
I left that talk with a gnawing idea in the back of my head that there was a story to be found.

A well established screenwriter once said to me, 'Ideas are a dime a dozen. Execution is the only thing that matters.'

Perhaps every once in a while you'll have a truly brilliant idea. But in most cases, ideas are derivative. Especially in an age where writing is influenced by more writing and by television and the internet, where the authenticity of experience itself is a rare thing, a good story is in the 'telling' of it. What most people begin with is an idea or a premise, not a story.

With Grafity's Wall, the premise was - What if we looked at the experience of growing up in rough neighbourhoods in Mumbai with street art and street culture as a lens?

Usually, I'll let an idea or a premise just sit in my head for a while. With Grafity's Wall, it was four months. It's rare that I'll actually write something down in a notebook. I'm not very protective of my ideas. If they're good, they'll survive. 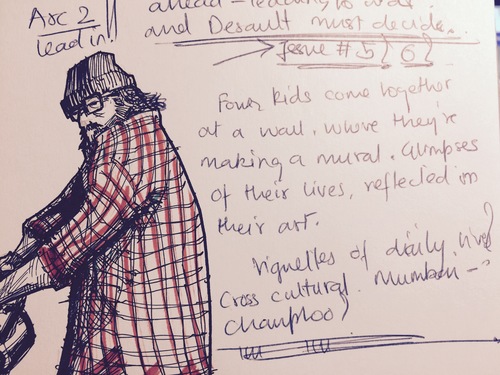 This is the only thing, pre-outline, that I found in an old sketchbook. Next to the sketch of a dude in a checked shirt with a chainsaw. I think I was writing a story about a lumberjack. Nothing sinister.

During this time I travelled back to Mumbai for the Comic Con. Anand and Aditya were there. Anand mentioned wanting to do something Mumbai related and that was the first time, I considered with any seriousness that this might become an actual story. I remember sitting at a bar, talking about what we wanted to do with it. Which leads me to the next thing I do with my ideas before they become stories.

I share. Like I said. I'm not protective with my ideas. I don't guard them. Certainly not among friends and potential collaborators. I push myself to narrate my stories. Just as broken, unpolished versions. There'll be bits where I struggle, and bits where I hit walls or take embarrassingly clichéd turns. But it forces you to vocalise. To put into actual words what's in your head. And those bits where you falter? Where you encounter walls while you're narrating? Those are the parts you'll struggle to construct when writing. When you're done narrating you'll notice all the places where the story felt weak or fell apart. That's great information. Do it with people you trust. Do it with people who wont mock, or ridicule or judge. Do it with people who want to listen and you'll find that narrating a story is a great way to get to an outline.

The other useful thing about narrating stories is that it forces you to fib. When you narrate and you hit parts where you don't know what comes next... you lie. You make stuff up and you make it sound like you knew what you were doing all along. I'm pretty much doing the same thing when I put words down on paper. I'm winging it.

I narrated Grafity's wall to three, maybe four people before I knew I could write it. I discovered my characters through narration. I discovered the scenes I wanted to stich together. Each time I narrated I added and changed pieces. By the fourth time, it worked. I could see emotional reactions where I wanted them and the narrative felt taut.

Usually, if I can get through narrating three quarters of a story without making a fool of myself, it's time for an outline. I write my outlines as a series of choices. A story is not a mere series of events. It's a series of opportunities presented to characters to make choices. Good ones, bad ones, appalling ones, tragic ones - but they're all choices. If the a character's actions in a story are inevitable, it makes for a dull read.
I find that this is a great way to think about an outline. It forces you to focus on what really matters to a story. World building and exotic settings and quirky characters are great. But the bones of a story lie in the things that truly matter to your characters and so the things that truly matter to the reader. I believe all stories are driven by desires and choices. Not necessarily conflict, as Ursula Le Guin beautifully puts it. 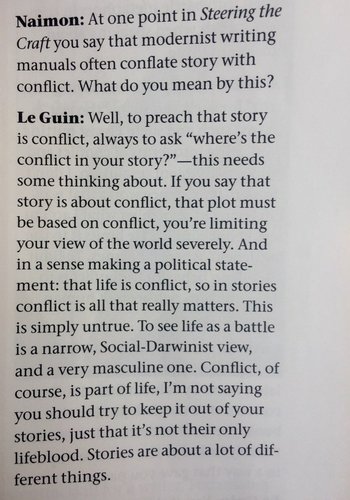 Not all stories need to be about conflict but someone has to want something. For me, this is where a story comes to life.

An outline is also where I start thinking about narrative structure. About the order in which I reveal things to the reader. Once an outline is written, I'll chop and change and play with things until it all feels right. By the time I'm done with it I'll have written it several times over. When I'm happy with the version or time has run out and Anand's expecting a script the next morning, I'll throw away the outline and almost never look at it again.
It's there as a fallback. It's the backstage rehearsal. It's the redundant music sheet on improv night. It's done it's job. It's gotten me to a point where I feel like I know what I'm doing. If I look at the outline again and try to follow it, there's no room for surprising myself. There's no room for a better idea to come in and change things around. Where's the fun in that?

That's all I've got, folks. This is how I write. It's not a prescription but a confession of the things that help me get an idea from my head and put it on to paper.