Glarnies, Green Berets & Goons launched just over a week ago so I thought it was about time I said hello.

I'd like to tell you a little more about Grafton's pub where my video was filmed. Making the video was a very interesting and exciting experience for me (not just because I got to enter a pub at 9 o'clock in the morning!) as with no one else in there, it made it much easier to imagine what it must have been like in the late 1940s when the war was over and people were starting to look to the future again.

The landlord just after the war was a gentleman called Jimmy Grafton. As well as running his family's pub, Jimmy had been writing for solo comedians for several years, among them Derek Roy, Harry Secombe, Peter Sellers and Alfred Marks. The comics brought their friends along to Grafton's who had in turn brought their friends and the pub had steadily become a hangout for up-and-coming comedians.

Tony Hancock took Larry Stephens with him one evening and Larry was soon spending a lot of time there too. He struck up friendships with most of the regulars and it was in Grafton's that he first met Spike Milligan, who was lodging in one of the attic rooms of the pub.

Spike, Peter Sellers, Harry Secombe and Michael Bentine - or 'The Goons' as they had become known - began performing for their friends on a small, makeshift stage in an upstairs room of the pub, using scripts written by Larry, Spike and Jimmy. Mr and Mrs Hancock and Mr and Mrs Stephens were often members of the audience, as was BBC Producer Dennis Main Wilson. The BBC eventually agreed to record a trial Goons programme as long as the cost didn’t exceed £125!

Jimmy Grafton's son, James, has very kindly allowed me to share this photo with you which shows Grafton's c.1948. Jimmy is the man on the right by the pub door. 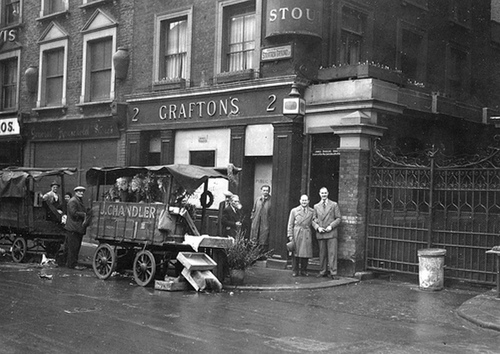