See the first performance of "Britain's First Situation Comedy"... 65 years after it was written!

The writers of Hancock's Half Hour, Ray Galton and Alan Simpson, are often referred to as the creators of the British sitcom but few people realise Tony Hancock had previously explored the genre with his friend, Larry Stephens.

In July 1952, Larry approached BBC Producer, Peter Eton, with a suggestion: he had come up with an idea for a comedy series, entitled Vacant Lot, to star Hancock as a blundering and pompous auctioneer and estate agent. The half-hour programmes were planned to consist of a complete story and would have no musical breaks, as was then the norm.

The script for a trial programme was commissioned and auditions took place at the end of October 1952 with Peter Sellers and Spike Milligan both considered for parts. Eton forwarded a copy of the script to the Variety Department on 3 November 1952, describing it as a, "gentle situation comedy," the first known use of the term in British broadcasting.

After much umming and ahing and toing and froing over details by the Variety Department, an exasperated Hancock declared that rather than keep delaying the project, he would prefer it was dropped and the script has remained on a shelf in the BBC archives... until now!

I came across it while researching Glarnies, Green Berets & Goons, together with a synopsis and partial script for the proposed second episode which I have expanded, based on my knowledge of Larry's life and work.

Now both scripts are being staged for the very first time by Birmingham Comedy Festival as part of the Funny Things festival in Wolverhampton. There will also be an opportunity to learn more about the story behind Vacant Lot and its rediscovery, in a Q&A session being held on the same day. Tickets for both events are available from the links below.

The Estate of Larry Stephens will be donating their royalties from the performances to The Commandos' Benevolent Fund, a cause which was very close to Larry’s heart.

Click here for more information about the Funny Things festival 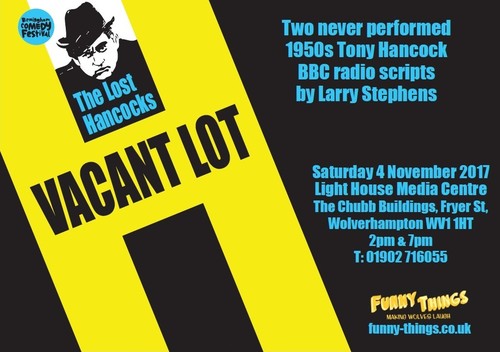