Larry had expected his medical examination to be a formality but he came away with devastating news. He later told his friends at Associated London Scripts what the doctor had said to him:

“You have the highest blood pressure I’ve ever seen. If you give up drink and cigarettes you might live for a year.”

It is impossible to imagine what a shock it must have been. Larry knew he had problems with high blood pressure but to be given just a year to live seemed ludicrous. He was writing The Army Game with Maurice and he had recently started writing another series of the Goon Show - the eighth - with Spike; everything else in his life was stable and normal. He thought back to his commando days and how he had learned that you could overcome any obstacle or physical discomfort if you really put your mind to it and believed you could. He remembered the first time he had heard the instructors bellowing, “it’s all in the mind,” at him and how he had yelled the same thing at the recruits when he became an instructor himself. That was the answer: as long as he truly believed it, he could prove the doctor wrong.

On the 28th of October 1957, the phrase, ‘it’s all in the mind, you know,’ appeared at the end of a Goon Show broadcast for the first time. It was as if Larry was sending himself a reminder to keep believing and to stay positive. The phrase was only ever included in the show when Larry was involved in writing the script; following this initial mention it is not used in any of the eight episodes from series eight that Spike wrote alone or in collaboration with John Antrobus, only in those that Larry wrote single-handedly or jointly with Spike or Maurice Wiltshire.

Larry wasn’t alone in suffering health problems as Spike was showing signs of nervous strain again. His wife, June, sent another Doctor’s note to the BBC on the 5th of November which certified that Spike was unable to work and explained in an accompanying letter that Larry would be writing that week’s show.

A mistrust of doctors and matters of life and death became significant themes in Larry’s art. He drew a doctor with medicine jars labelled ‘eeny’, ‘meeny’ and ‘miny’ on a shelf behind him; he drew another writing out a prescription and seemingly unaware that his patient had hanged himself from the ceiling. He drew Dickensian-looking undertakers with top hats and mourning veils. He wrote out a prescription for himself: 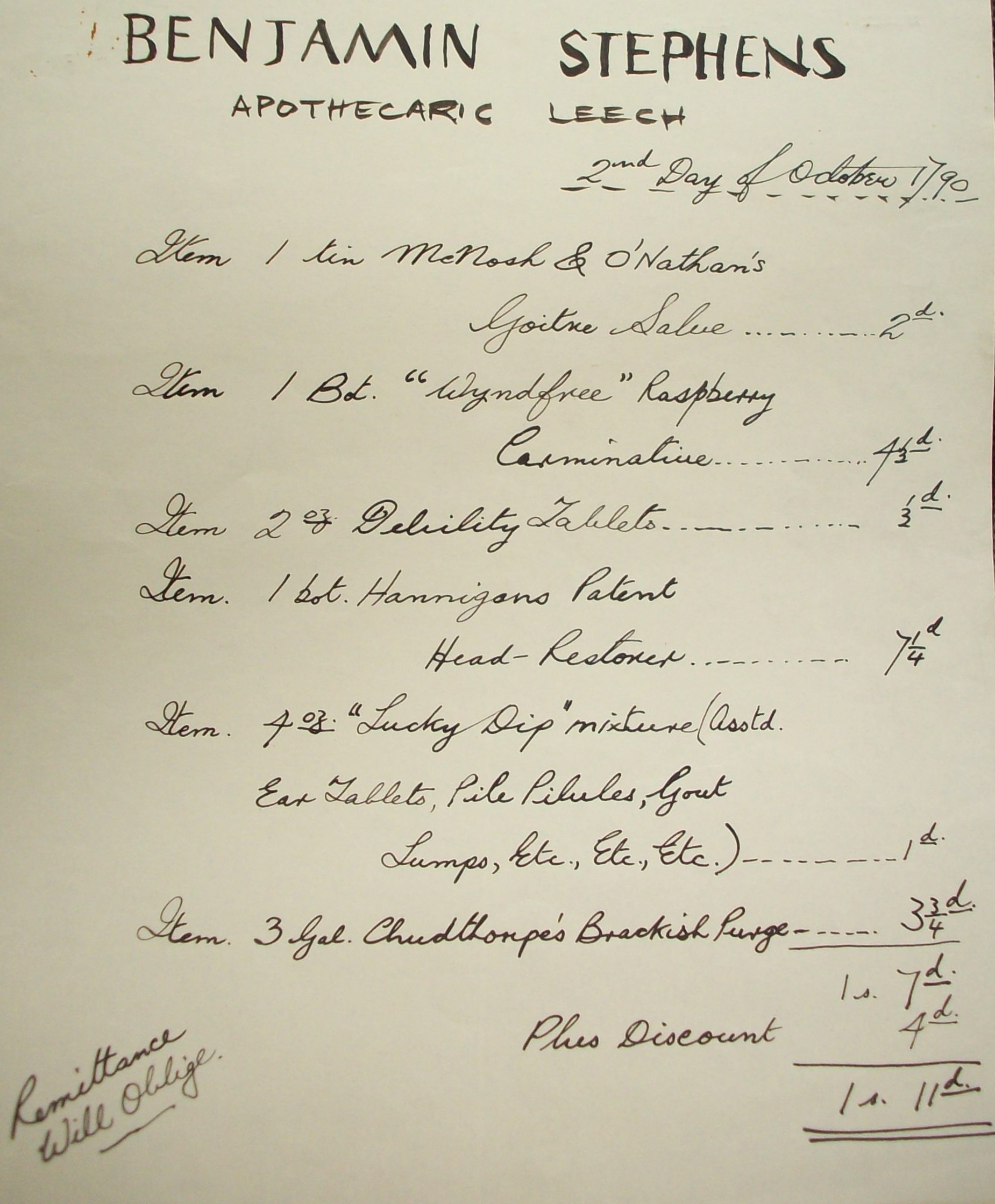 Larry’s health may have been deteriorating but his career was definitely on the up. The Army Game had proved to be such a hit that it was moved from its fortnightly Wednesday slot and began a weekly run on Fridays at half past eight in the evening from the 20th of December 1957. Five days prior to this, some very special guests had attended a recording of the Goon Show episode ‘The Great British Revolution’. A list of names is held in the BBC Archives, dated the 6th of December, which was probably prepared for the visit. Spike tops the list and is described as Writer/Performer; Larry is second as Co-Writer and Harry Secombe and Peter Sellers are shown below, in that order, as Performers. The guests were the Duchess of Kent, her daughter Princess Alexandra, her sister Princess Olga and her niece Princess Elizabeth of Yugoslavia.

There had been a request from the Royal Party that their proposed visit be kept a secret but Pat Hillyard, the Head of Light Entertainment, had agreed that Spike, Peter and Harry could be warned a few days before. Unfortunately, due to a misunderstanding, the performers weren’t alerted to expect some important additions to the studio audience until the actual day of the recording. Although he perhaps wasn’t wearing what he would have chosen to meet royalty, had he known about the visit beforehand, Larry was always immaculately dressed. Spike, on the other hand, was not and in addition he had made a dinner arrangement for after the recording which he was unable to cancel.

While the BBC’s Butler served champagne, the Duchess and her relations chatted to the writers, performers and production staff. Spike, however, didn’t have long to chat and had to dash away to his prior engagement. He felt betrayed and embarrassed. He reacted to the incident by taking to his bed and staying there with the door locked and the telephone off the hook. His doctor diagnosed excessive stress caused by overwork and recommended total rest.

Spike wrote a letter of apology to the Duchess and her response was included in a letter from her Private Secretary to Pat Hillyard, saying that she completely understood why Spike had to leave early. This did little to placate Spike though and he fired off another letter – this one full of animosity – to Hillyard. The fiasco and Spike’s subsequent withdrawal probably explains why the first Goon Show of 1958, ‘The Thing on the Mountain’, was written by Larry with Maurice Wiltshire.

The Goon Show had undergone several changes of producer across the different series. At the start of series eight Charles Chilton was producing but from programme number six, Roy Speer took over. When Larry and Maurice wrote ‘The Thing on the Mountain’ Roy Speer was away and had been temporarily replaced by Tom Ronald. Larry was far from impressed with the temporary producer and wrote a letter to the Assistant Head of Light Entertainment, Jim Davidson, to complain about unnecessary cuts and segments of “messing about” by the cast which hadn’t been meant for broadcast but were left in.

Listening to the recording of ‘The Thing on the Mountain’ in conjunction with the original script, Larry’s point of view can be understood. There do appear to have been some odd decisions in respect of what has been left in and what has been cut out although as the writer, Larry was bound to be more sensitive to such things than other listeners.

The story is set in the Welsh village of Llandahoy which lies at the foot of Mount Snowdon. A monster has been terrorising the locals up on the mountain so the Mayor offers a reward to anyone who can capture it and Neddie Seagoon (Harry Secombe) accepts the challenge.

Seagoon is catapulted towards the peak of Snowdon but due to “double-strength braces” he lands at the top of Blackpool Tower instead where he encounters a ticket collector played by Sellers. The scene begins with Sellers reading the parenthetical direction ‘Surly North Country’ and midway through, a 10-second section has been left in which involves Peter Sellers fooling around almost inaudibly in the background while Harry Secombe giggles at him. Not long after, there have been cuts to a scene between Bluebottle (Sellers) and Eccles (Spike), two of the most popular characters. Seagoon catches a train to the top of the mountain and Bluebottle and Eccles are the engine’s driver and fireman. The cut segment is as follows:

BLUEBOTTLE (BB): Eccles – stop pulling my whistle. It is my job to pull my whistle.

BB: No – you are the firemans.

ECCLES: Aw – come on. Let me pull it just once.

BB: All right – but only once

Perhaps this was considered too suggestive by the censors but it seems unlikely since the line, “Thank you Little Jim. Now get back in the barrel,” has been left in. Although this is perhaps not so significant to modern-day audiences, the barrel reference would have been very familiar to the majority of listeners in the 1950s, many of whom were ex-military. It alludes to the punchline of a dirty joke in which servicemen take it in turns to go into a barrel and help their comrades to relieve their sexual frustrations.

The Censorship Department seem to have been a source of frustration for Larry. One of his surviving drawings is a comic-strip style representation of the BBC and the Censorship Department cartoon shows a writer standing to attention in front of a panel comprised of different nationalities while his script is scrutinised. The caption reads, “Don’t you realise a line like that may cause racial prejudice?” Larry’s depiction of a Training School for Comics shows them being taught maxim no. 1: ‘If it gets laughs the script was poor but you gave a good performance. If it doesn’t get laughs the script was poor.’ Junior Producers and stopwatches also feature heavily.

As series eight of the Goon Show progressed into 1958, Larry and Maurice seem to have been writing scripts every other week in rotation with Spike. This continued until programme 21 when a reworking of ‘The Man Who Never Was’, which had been written by Larry with Spike for series six, was broadcast, due to Spike not being well enough to write a new script. From that point on, Larry and Maurice didn’t write anything further for series eight and Spike wrote the final five programmes either alone or in collaboration with John Antrobus.

Larry and Maurice were probably focusing most of their attention on The Army Game which had by now become a major hit. One of the first programmes in July 1957 had achieved a Nielsen Network Rating of 62%, indicating that 62% of families with a choice of television channels watched The Army Game for at least six minutes. By February 1958 this had risen to 73% with the programme reaching audiences of almost four million and by April it was ranked as the most popular television programme. The Children’s Advisory Committee of the Independent Television Authority commissioned a report on the subject of ‘What Parents feel about Children and Television’ which was later published by HMSO. Research was carried out across April and May of that year and the survey revealed that 21% of respondents’ children had stayed up beyond their usual bedtime in order to watch The Army Game.

Larry’s focus had probably been temporarily diverted away from the Army Game and towards his wife around this period though as on the 22nd of March 1958, Diana was arrested on suspicion of drink driving following an accident which put John Junkin in hospital.