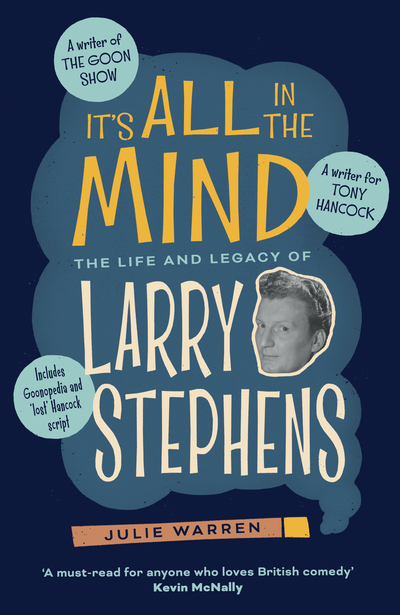 British popular culture would probably be very different had Larry Stephens not been born. We could now be living in a world without the Carry On films or Monty Python and we may never have heard of Tony Hancock, Peter Sellers or Spike Milligan.

For the first time, the life and work of this unsung hero of British comedy has been thoroughly explored. Using unrivalled access to Larry Stephens’ personal archive of letters, photographs and artwork, plus interviews with Stephens’ many notable friends, family members, comrades and colleagues, It's All In The Mind: The Life And Legacy Of Larry Stephens tells the story of a boy from the Black Country whose short life had such an enduring impact.

Stephens’ promising career as a jazz pianist was interrupted by the war, and after serving as an officer with the Commandos he moved to London and struck up a friendship with Tony Hancock, becoming the sole writer of Hancock’s stage material. Hancock introduced him to Peter Sellers, Harry Secombe, Spike Milligan and Michael Bentine and together they created the Goon Show, arguably the world’s most influential comedy programme. As one of the main writers throughout the Goon Show’s nine-year run, Stephens’ experiences and acquaintances became themes and characters within the show.

He was the first person Peter Sellers attempted to contact beyond the grave; the Best Man at Tony Hancock’s first wedding; a regular writer for one of the most popular television comedies of the 1950s; and wrote for many leading actors and comedians, including supplying one-liners for Ealing Comedy, The Ladykillers.

His marriage to a catwalk model made him the focus of malicious jealousy from those he thought were his friends and that, combined with the pressure of having to come up with funny material week after week, is likely to have contributed to his death from a brain haemorrhage caused by hypertension at the age of just 35.

It's All In The Mind: The Life And Legacy Of Larry Stephens will also include two appendices: the ‘lost’ script for Vacant Lot, a proposed Hancock sitcom, and a ‘Goonopedia’ detailing who was responsible for writing each of the Goon Show’s episodes – often different from those who were credited with having done so.