Nothing But A Good Time

A cultural history of Glam Metal: where it came from, how it defined America in the 1980s and how it all came crashing down.

Support this project
Music
The edits are done – no more names in the book. Limited rewards are still available. Pre-order now.
$15
27 pledges

1st edition paperback and special e-book edition. Plus your name in the list of Super Patrons in the front of the book.
$40  + shipping
35 pledges

BATTLEJACKET # 1 is an independently-produced, limited-edition photographic magazine, with 50+ colour pages dedicated to the art of home-made heavy metal denim. Shot on location at metal gigs in London over 2016 and 2017 by Justin Quirk and published by NO UFOs. Plus the Patron Paperback level. 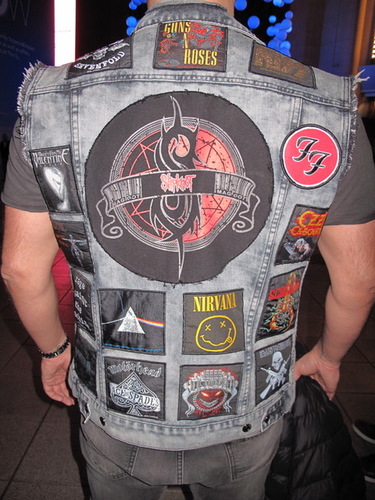 5 copies of the 1st edition Super Patron paperback and the ebook edition and your name in the list of Patrons in the back of the book.
$300  + shipping
1 pledge

Dinner with Justin before a concert in London plus everything at the Super Patron Paperback level.
$375  + shipping
1 pledge

Justin will DJ a set at any event of your choosing plus everything at the Super Patron Paperback level.

Only three available. Location ideally within 4 hours of London.

Justin will write a bespoke review for you on any album you request plus everything every at the Super Patron Paperback level.

If Glam Metal is remembered at all nowadays, it’s as the punchline to a joke, the basis for a novelty fancy dress costume, or a hilarious relic of a bygone age. There’s never been a serious, critical reassessment of this bloated, hairspray-misted aberration. Music’s accepted chronology records that in 1991 (‘the year punk rock broke’) after almost a decade of commercial dominance, Glam Metal was killed dead by Grunge. Like some mutant branch of the evolutionary tree, it was overtaken by a younger, faster version of itself and hit a genetic dead end, leaving behind only some rudimentary cave paintings of a stocking clad ‘bitch’ an empty bottle of Jack Daniels and nothing of any value.

However, this is a wilful rewriting of history. For the larger part of 1980s, Glam Metal was legitimately one of the largest forces in popular music both commercially and creatively. The music built MTV and broke the territories (Japan, Eastern Europe) that the rest of the industry then poured into. Bands pushed at the frontiers of technological production (Def Leppard’s Hysteria was painstakingly pieced together by its producer like a digital collage before such practises became commonplace in electronic music); bands sold out stadiums to vast crowds of people who the music press never spoke to; fans and artists alike died in horrifying accidents from the muddy quagmire of Castle Donington to the motorways of Florida; the genre inspired epic works of cinema from Wayne's World and The Wrestler to The Decline of Western Civilisation. It was a legitimate cultural force that united kids like me in the suburbs of London with heroin-addled losers in California and rebellious, mullet-sporting teens in the Communist bloc.

Glam Metal soundtracked an era where America regained its cultural confidence. Where everything – from WWF and Vegas shows to action films, the advertising industry and contemporary art – became bigger, brasher and more aggressive, before curdling into something darker as the decade ended. The music functioned as a pile-up at the end of American post-war musical culture where the tropes and tricks of the previous 40 years (cowboy blues, vaudeville, heavy rock, show tunes, punk, west coast balladry) collapsed into one last smouldering heap before pop finally turned in on itself and succumbed to a crippling, self-referential wave of irony and repetition. Kurt Cobain referenced Boston’s More Than A Feeling in Smells Like Teen Spirit because it was arch and clever – Dave Lee Roth did an enormous star jump off the drum riser at every Van Halen show because he was signalling his silverback dominance of every other male within his purview. The bands left behind a body of songs so untouchable that they get covered today by everyone from Mariah Carey to Taylor Swift, but the originators get no critical credit. Of course, there was a lot of terrible music by people like Grim Reaper, Anvil and Tigertailz, but they’re still an important part of the story.

On the day that I write this, shaggy-haired pop-metallers Firehouse will take the stage at the Creek Hill Barn in Virginia’s Shrinedom festival, after a display from the local fire brigade and a mini helicopter team. Alongside their glam metal peers, Slaughter, Lita Ford, Warrant (minus deceased singer Jani Lane), Motley Crue’s Vince Neil (minus Motley Crue) and Local DJ Tod Pronto, they will keep the flame of glam metal (just about) burning.