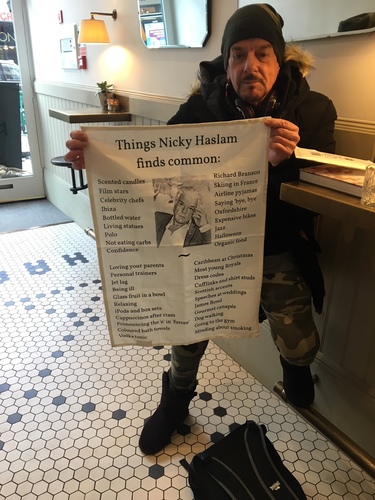 A signed first-edition of the book, the ebook plus bonus material that didn't make it into Good Taste
Choose this reward
$105  + shipping
5 pledges

Cook with a friend

Let me advise you on your dinner party

Throwing a dinner party? Let Nicky advise you on what to cook, what to drink, the music, decor and who you should channel on the night. Plus you will receive a signed first-edition of the book and the ebook
Choose this reward
$375  + shipping
1 pledge

A night on the town

Join Nicky for a night on the town at an event of his choosing or as his guest at one of his cabaret shows. You will also receive a signed, first-edition and the ebook
Choose this reward
$450  + shipping
5 pledges

Join Nicky at his home in London to sample some of the dishes in Good Taste and to hear his stories. Plus receive a signed first-edition of the book and the ebook
Choose this reward
$750  + shipping
1 pledge

Help Nicky to make this book and receive a handwritten, special thanks in the front of your first-edition hardback book, plus you will receive the ebook
Choose this reward
$3,000  + shipping

Become a patron of Good Taste and receive a special thanks in the front of the book plus a handwritten, personal dedication from Nicky in your edition. You will also receive the ebook
Choose this reward

A compendium of favourite dishes from such luminaries as Cole Porter, Diana Vreeland, Clark Gable and Andy Warhol, as well as other recipes from forgotten cookbooks, unforgotten meals in friends' homes, telling tips and surprising short-cuts gathered over a lifetime.

I revel in the wild extremes of people’s attitude to food, their fantasies and their foibles, from the way food looks as well as the way it tastes. To some, it's the “grand plat” that matters; to others, the simplest. For Salvador Dali, the surreal didn’t stop at the dinner table. His dazzling Peacock à l’Impériale came with the bird’s iridescent display of tail-feathers, while he declared a stomach-churning Woodcock in its Excrements a “symbol of civilisation”.

But for Diana Vreeland, with whom I worked on American Vogue in the early Sixties, peanut butter, along with the bikini, was “the greatest invention since Christianity”. Our office lunches consisted of peanut butter and Jello sandwiches, served with slugs of vodka.

Lady Diana Cooper told me the two essential ingredients for a good dinner party: “Too much to drink and a chocolate pudding.” Cecil Beaton thought anything cheese-flavoured was common. Louis XV of France told his mistress about the epigrams he had enjoyed with Voltaire the night before. Thinking they were the latest dish, and not to be outdone, Mme du Barry served him Epigrammes D’Agneau that very evening. The dish still exists — as does her other culinary contribution, Creme Du Barry, more prosaically known as cauliflower soup.

I must point out that Good Taste: A Decorator’s Cookbook isn’t strictly a cookbook. While I’m a fairly good and adventurous hand at the stove — though hardly a passionate cook — I am a passionate believer in the poignancy of certain tastes and sensations, remembered or newly discovered, of things eaten in youth or yesterday. What I’ve written is a sort of foodography of feasting with both the frivolous and profound.

You will also find a sheaf of recipes gathered over the years. Until now, they have been crammed into a bulging folder which has followed me across continents. Others I found in arcane cookbooks; many, now curled and yellowing, have been ripped from magazines or newspapers; some are hearsay, dimly remembered, and given a personal twist.

I love food that reminds me of places, friends, acquaintances and situations, newly discovered or frequently time-tested. When making many of the dishes that I’ve included in Good Taste, I immediately see such moments again. There are long-forgotten and best-loved recipes, comforting favourites from my childhood, new sensations I was introduced to by Manhattan socialites in the Sixties, cowboy cooking from my time breeding horses on the ranch in Arizona and dining with the smart set from London to Los Angeles, Istanbul to New Orleans, Hong Kong to Hampshire.

This book was inspired by one written by my aunt, Lady Sysonby, during the early years leading up to the Second World War. It's the prettiest little book, illustrated by Oliver Messel, with a foreward written by no less a literary legend than Sir Osbert Sitwell. Ria Sysonby’s father, Sir Frederick Ponsonby, was Private Secretary to three monarchs. He wrote of the first, Queen Victoria: “The Queen had far too much character and individuality to have good taste.” He meant, clearly, her taste in surroundings (which we know was stultifyingly fussy) but his vignette of her “breakfast table, laid entirely with gold, the queen eating a boiled egg from a gold egg cup with a golden spoon” gives a fascinating glimpse of simplicity amid splendour.

This mix of individual taste for the mouth and the eye is what I hope the reader will find in the pages of Good Taste. Not serious “good” taste, but utterly delectable things tasting truly good — with plenty of fun along the way.