A black comedy set in 70s Dublin: a theatrical agency acts as a front for British counter-terrorism.

It’s so pleasant here, really, residing by the seaside - albeit in the depths of the deepest mid - Winter.

With very few sounds to be heard about the place, apart from the muttering and mumbling and shuffling and padding of good old Maitresse Rosie ‘Tit - tifalrious’ Dixon.

Who, with her panoply of chins and blinking, winking deep - set hazel eyes, never fails to remind me of the famous star of such music hall - inspired gems as:The Square Peg, School For Scoundrels and Make Mine Mink.

Never once has she disturbed me at my work.

With the only time I see her, recently, being at breakfast.

She even brings me supper late at night - shuffling off along the corridor without so much as a whisper. Except on occasion maybe the odd little humming of a tune from the old days - the theme from Bulldog Drummond, maybe.

Dad’s Army, or maybe Round The Horne.

However, I was telling you, wasn’t I, about my fond old friend and underling, the right honourable Henry Plumm, imaginary O. B. E.

That is to say, illustrious former associate in the neighbourhood of dear old dirty Dublin in the long ago, rainswept city of perpetual drizzle and creaky bones.

To whom I bade goodbye on that first day of his arri - val, like some reverse emigrant with his raincoat flung across his arm, catching the bus to his appointed digs on Hollybank Road - located in a leafy suburb to the north of the city, Lower Drumcondra, a place used temporarily by the agency for new arrivals,

Yes, that was his first introduction to the place they called ‘Eire’:(pronounced ‘Ay - Ruh’) - or ‘The Atoll Of Despair’, as Major Ambrose half - jok - ingly used to call it.

Not that that old Roland was alone in his less than laudatory apprehension of the place - for in the year 1961, at least so far as I could ascertain, there appeared to be a general undisputed consensus that, scarcely four decades after achiev - ing liberation that poor old ‘Eire’, or whatever it happened to be called - it seemed pretty much on the point of vanishing without trace, yes quite literally disappear off the face of the earth.

But all of that now seems like centuries ago, almost medieval.

As, I daresay, I do myself.

With even that old Rosie Mc Titty suggesting from time to time that she finds my way just that ‘little but old - fashioned’ - and that’s with herself, let’s face it, being no Spring chicken.

But I’m of an age(78 next birthday)when such percep - tions cause little or no offence. Indeed, as a matter of fact, more than anything they tend to amuse me.

‘Ah!Dat me!’, you’ll hear me exclaim - affecting the slightly impedimented brogue of my former acquaintance(now pathetically filled to the gills with a goodly portion of the natural mineral, 0% proof genuine bathtub H20) back there on the shores of the old atoll.

‘Just what are we going to do without him, our famous darling Henry. The world will be a quiet place without him, that’s for sure!’, I seem to hear his closest friend - Maurice Norton, observing in my imagination as I determinedly perambulate by the shoreline or upon the cliffs.

More than any of them, I think, that good old Maurice - he really used to enjoy them, get a kick out of the rumours which, certainly later on, had begun being disseminated by certain individuals as regards myself and ‘Dublin’s Premier Theatrical Agent’ Henricus Percival Plumm.

To the effect that we - or at least I - had been recruited by Her Majesty’s Government for the purpose of - can you believe it? - strategic disruption, elaborate deception and downright flat denial!

‘Now we know’, one particular barfly by the name of Marty Furlong - a former stage - hand who hadn’t been employed for years - had muttered behind his hand at the counter one night in Minty’s, ‘what was meant by Harold Wilson when he promised to transform Britain from a nation of gentlemen into a world of players. Yes, we can see now what he meant - and the kind of ‘players’ he had in mind.

‘Honest to goodness the things that fellow says!’, I used to laugh whenever he’d make these rather less - than - veiled assertions - as did practically every other ‘actor’ in Dublin - Minty’s or The Minstrel’s Rest, in otherwords.

Which was where I’d first become aware of these random imputations.

‘The Intelligence Men!’, I - so brazenly! - used to laugh it off. ’Yes!That’s me and that old Henry, beyond the shadow of a doubt!Living our lives as though it were a playlet scripted, say, by Leonard Pinter. ’Cor, mate!This bomb here in the front looks like it’s going to off before we reach our destination!Ah go on out of that, will you, Henry me auld mucker - sure don’t have anudder one, after all, in the back!’

Get to read Patrick's masterpiece before everyone else – receive a signed, numbered proof copy six months pre-publication (followed by a signed first edition on publication). Strictly limited to 60 copies. 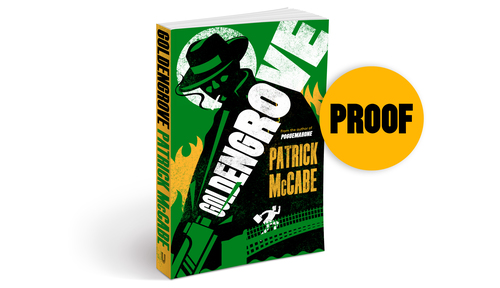