From the Emmy Award-winning writer, a novel about an Antiques Whisperer and forgery hunter on the trail of a mysterious document 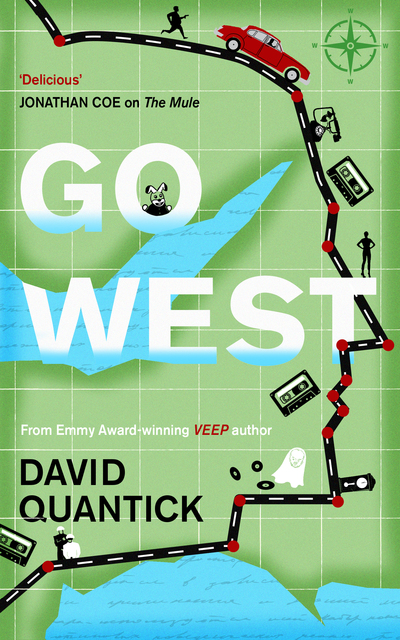 Fiction
You made Go West a reality. It's available in all good book stores now.
$8
49 pledges

paperback edition, ebook and your name in the back of the book.
$30  + shipping
137 pledges

Paperback edition, ebook edition and your name in the front of the book
$75  + shipping
17 pledges

Signed paperback edition, ebook edition and your name in the front of the book
$90  + shipping
2 pledges

A unique CD made by David of the John Peel highlights from Go West plus a signed copy of the book, ebook and your name in the front
$90  + shipping

A Spotify Playlist of David's 50 Peel Faves plus a signed paperback, the ebook, and your name in the front of the book
$150  + shipping
10 pledges

Two invites to the launch party in London, a signed 1st edition paperback, ebook edition and your name in the front of the book
$375  + shipping
4 pledges

Everything up to the launch party, plus the opportunity to name a character in the book. Literary fame for you or a loved one. Limited to four

GO WEST is a novel about Charlie Bread, self-styled Antiques Whisperer and forgery hunter. When Charlie is sent on the trail of a mysterious document that may have been written by the inventor of Peter Pan, his life becomes a road movie full of pursuit and intrigue, soundtracked by old John Peel shows, the beautiful Penelope, and a game of high road hide-and-seek all across the West Country. In a world where nothing is what it seems, Bread has to find out the truth – before the truth finds him out.

Go West is the second novel by David Quantick, Emmy-winning writer (Veep, The Thick Of It) and author of The Mule (“A Da Vinci Code with laughs – The Independent, “ingenious, likable, funny and above all entertaining” –Spectator, “accomplished and witty highbrow farce” – Sunday Times).

Paperback edition, ebook edition and your name in the front of the book
View all 8 rewards