Hello, all. It’s been a while, hasn’t it? I thought it was about time that I checked you aren’t all pining pitifully for me. Also, I have some shameless plugging to do…

Firstly, and after a Herculean effort by assiduous, tecchie menials at Unbound, the Kindle edition of Gin Lane Gazette is now available. You’ve all been incredibly patient, and very kind in not burning me in effigy because of its tardy arrival, and I thank you for it. Please spread the word, and encourage/blackmail everyone you know to buy it. http://unbound.co.uk/books/gin-lane-gazette/ebooks

Secondly, I’m giving a Gin Lane Gazette talk at Handel House Museum, Brook Street, London, on Saturday 25 January, 2.00-3.30pm. I’ll be dealing with how 18th-century journalists and readers relished the misbehaviour and eccentricities of Handel’s contemporaries during the great age of newspapers; how public figures from musicians to courtesans were afforded celebrity status by the press; and how personalities courted the newspapers’ attention. Handel’s notorious gluttony, the scandalous Cibber family, the Foundling Hospital’s founders, and Dr Johnson and Jonas Hanway’s war of words in the press over the dangers of tea-drinking will also feature. Here’s the booking information:-

Thirdly, those of you with historical leanings might enjoy another endeavour in which I’m heavily involved...

If you were looking for one object to symbolise the boozy conviviality of 18th-century society, it would have to be a punchbowl. Brimming with bonhomie and potent concoctions, clubbable Georgians used the flimsiest of excuses to congregate and make merry, and punch became the focus of countless nocturnal revels.

The punchbowl sits at the centre of many Georgian satires on debauchery, including Hogarth’s famous A Midnight Modern Conversation of around 1732, and it was still an essential roistering tool when Byron was toping the night away at the Cocoa Tree Club in St. James’s Street. The poet recorded that on one occasion he and his drinking buddies quaffed champagne and claret until 2 a.m., before switching to a punch ‘composed of madeira, brandy, and green tea, no real water being admitted therein’.

Clus were established to cater for every taste, interest, and fetish imaginable, and the figure of 25,000 societies and clubs founded in Georgian London is a conservative estimate. Some of the era’s more self-explanatory club names include The Old Codgers, The Lying Club, The Surly Club, The Farting Club, and The Fumblers.

Recently, I’ve been asked to co-host history-themed events in the Hogarthian splendour of Blacks Club, in the dark heart of Soho, and the chance to resurrect some of the spirit of 18th-century clubs is too appealing to resist. The medical historian and Chirurgeon’s Apprentice http://thechirurgeonsapprentice.com/ Dr. Lindsey Fitzharris, and the founder and editor of The History Vault http://www.thehistoryvault.co.uk/ , Rebecca Rideal, are my co-conspirators in what we have called HISTORIC PUNCH. This will be a monthly gathering of like-minded souls who revel in the glories of our rich and raucous past.

Whether our guests are professional historians, re-enactors, archaeologists, thespians, dilettanti, or simply curious wayfarers, they will find a warm welcome and a cup of cheer at our soirées. Each event will take a topic rather than an era as its primum mobile, in order that every attendee should find something to tickle their historical fancies. Since the post-Christmas period is traditionally a time of cloyed palates and ravaged livers, we have made ‘Over-Indulgence’ the theme of our debut event.

All are entreated to join us for delights including vibrant conversation, a draught or two from the punchbowl, and even post-shindig victuals and vino, supplied by the estimable retainers at Blacks. We are also able to boast charismatic and expert guest speakers including - at our inaugural bash on 27th January - the historian, author, and award-winning blogger Lucy Inglis (who conducted our Gin Lane Gazette Walking Tour), and Unbound author and Time Team’s venerable archaeologist Francis Pryor. http://unbound.co.uk/authors/francis-pryor

Attend one of our monthly events, and I’ll gladly sign your copy of Gin Lane Gazette, if I haven’t already. We, your triumvirate of hosts, have the honour to remain your humble and obliged servants, and look forward to welcoming you within the purlieus of Soho ere long. More here: http://www.historicpunch.co.uk 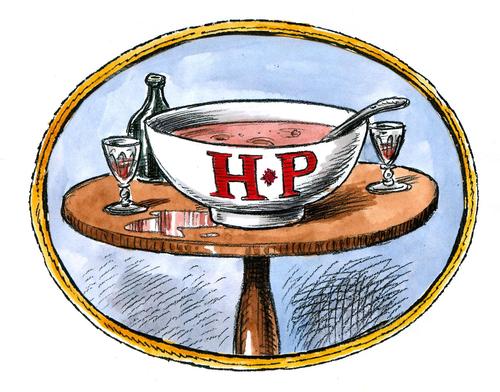 1st edition hardback copy of the book with your name in the back, and a copy of the ebook.