Write what you know?

Hmm... I've never been overly struck with this piece of CW advice. I nearly wrote cant, but but that's perhaps a little harsh. I can't help thinking that a lot of great writing would never have seen the light of day if people took this advice too literally. Anyhow, here is a story written when I used to take this advice. I leave it to you to see its relative merits. 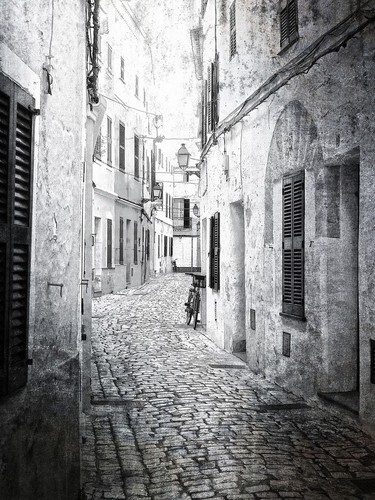 They say that no-one knows how to wear a hat nowadays. It is a fact that no-one does, or has for years, except, perhaps, actors. Rafael knew though. Of course, he was past 70 years, when first I met him. Maybe he knew your grandmother. He knew mine.

There were - still are maybe - men who congregated. Not in churches. In the public places of the town. Plaza Alta, the Recinto Ferial, or Plaza Baja. Low Square: I used to smile when I saw Rafael and his cronies walking slowly up the long hill to get to it. They'd sit on the café terraces, always in the shade. One 'café corto' stood for a quite a while in front of each of them, until they resorted to giving the camarero a collective frown, if he dared ask whether they wanted 'algo mas?' They didn't need anything else. Those short, tar-black coffees could last all day, or at least an afternoon. Later, they'd walk along – not uphill, mind you – to Plaza Alta, 'High Square.' There were no cafés in Plaza Alta, the old fellows would do a mini-paseo: a walk, slow-and-stately, around the square, until 7 in the evening. Most of them would then leave for a bar, rather than a café - although the distinction was a fine one, often hingeing on the lack of pavement tables.

At about 7 o'clock the women came out, your grandmother, perhaps. Certainly mine. They would be arm-in-arm, in groups of three or four, talking in whispers rather than the shouts and guffaws of the men. Square, blocky figures dressed entirely in black: mourning for lost looks.

My grandmother wore a shawl of bright, busy colours: but the others forgave her this indulgence. I remember a woman no less buttressed to the front than the others, although there was the hint of a waist in her figure, which marked her out still more than the shawl, perhaps. In those days there wasn't much traffic in the town. The women's evening paseo would spill into the thoroughfares, and even the Guardia's only vehicle would slow down behind the chattering crows. Some of the other drivers were not so polite, sounding their horns with enthusiasm. The fact that some of the Seillas – “Little SEATs” - were being driven by their sons – and, occasionally, daughters - seemed not to matter. The tiny round car was the preserve of the town's personajes; the doctor had one, as did the Alcalde – and, of course, my father. It broke my heart the day he told me it was a copy of an Italian design; its lines had seemed so very Spanish to me.

Rafael had several hats. Occasionally, when I saw him walking on the Old Malaga Road on a weekday afternoon, he wore a battered old straw-hat. My memory tells me it was a Panama, but that must have been unlikely. In the Plazas, or walking through the town, his head was shaded by a wide-brimmed felt hat. He told me it was an American Gangster's hat. It must have been a fedora. He let me wear it once, my hair smelled of oil and sweat and the leather of the hat-band inside, afterwards.

Sometimes, when my mother was busy, my hand would be gripped firmly by my Grandmother's calloused palm. If the time for the evening paseo arrived and there was no sign of my mother, I would be a part of the parade around the Plaza Alta: a tiny figure amongst the shapeless women in black. The first time I met Rafael, I would have been about seven years old, hanging on to my Grandmother's hand. Rafael gave a slow wink as he passed us in Plaza Alta. Of course, I winked back. The old man raised the fedora and continued to walk counter-clockwise around the square. Grandmother must have been about fifty-five years old. I was her only grand-child, but I do not think she spoiled me. 'Spoiling a child does it no good,' she would say. What you experience is what you know. There were no aunts or uncles on my mother's side and my father's family were in Seville, he claimed.

After that first wink, there were many more. One summer evening, my grandmother agreed to let Rafael escort us back to the Cafe Albondiga for a refreshing drink.

'Antoñito,' Rafael said, 'would you like a Coca Cola?'

I did, the shape of the bottle would fascinate me, long after I had guzzled its contents.

'We are not all Americanos, Señor,' Grandmother replied, but she accepted a Soberano brandy.

The conversation was not interesting; at least not for me. Grandmother complained about my mother's lack of interest in the home, she told Rafael that she was so ashamed of the town house my family lived in that she had asked my father for a key. She said he'd given her a whole bunch. Rafael smiled and nodded, and occasionally ruffled my hair. My Grandmother told him how she went to the house every day thereafter to see that porcelain shone and brass sparkled. My mother slept through polishing, mopping and brushing as though the night before had had too few hours.

After that first evening, it was always the same. When summer slid into autumn, my Grandmother could be persuaded to a coffee, whilst the waiter would bring me Cola Cao and the hot chocolate would be enough to keep me warm at the pavement table.

One evening, Rafael asked Grandmother, 'does he know?'

Although I was sleepy, I mumbled 'yes.'

But Grandmother said, 'no, no he doesn't.'

I was dropping off to sleep, but I was sure that Rafael snorted and said, 'some policeman.'

Then, on another winter evening, two years later, I refused to go with my grandmother. I had just had my ninth birthday. The bicycle I had received for my birthday was a B.H. A good Spanish bicycle from the Bestegui Hermanos. It wasn't red as my father had promised. Grandmother had tutted and shook her head, when I told her of my disappointment the first time. That evening she gave me a cuff to the back of the head, when I whined about the colour again.

'I hate you, Abuela,' I screamed as I ran upstairs.

My mother slept in her own room. She had told me never to come into it. She used to laugh and tell me that a gentleman never entered a lady's room uninvited. That day I burst into the room and my mother screamed. The man laughed, as he looked over my mother's shoulder at me. It was no mystery to me what they had been doing. My school-friends and I had seen horses and dogs do the same often enough. I ran back downstairs and took my grandmother's hand. Her face looked older. She said I had seen the product of 'spoiling.'

Not long after, at about 8 in the morning, the Guardia Civil's only vehicle arrived outside our house. The two uniformed men greeted my father, he was still Chief of the Policia Local. Mother was still asleep, my father said, but I saw him point at me. Jose Miguel Valderrama and Antonio Badia Ruiz looked embarrassed. Jose went to stand by the front door. He undid the flap on his holster, Antonio gave a deep sigh.

'Just 'til his grandmother comes,' my father said.

He seemed not to know what to do with his hands, clasping them together in front as if about to pray or putting them behind his back. Every so often, he would hold them out in front of his eyes as though he didn't recognise them. Grandmother came – and Rafael. It was the only time I saw him without a hat.

'You know what to do,' my father said to him.

The wedding, a few weeks later, was a small affair. Rafael wore his fedora, Grandmother wore something approaching a smile. She had explained to me that Mother had gone away and Father was busy with the police. I knew in my heart that he would come. I kept peering for him through the orange blossom the guests threw over the happy couple. Grandmother saw my face as we left the church near Plaza Alta and handed me the leather bag containing the thirteen coins that Rafael had given her. I thought my father would come right up until the celebration dinner was over and Grandmother and I walked to Rafael's house on the Old Malaga Road.