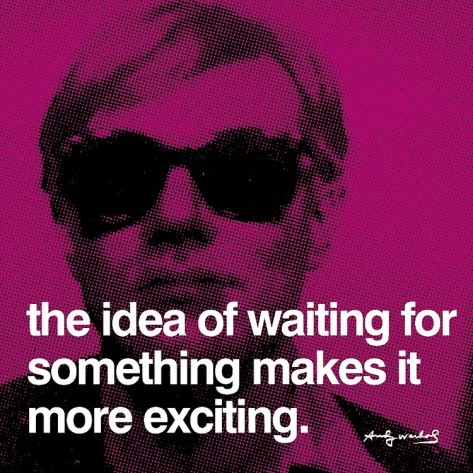 We wait for large parts of our lives. In the Armed Forces, life is generally long periods of waiting punctuated by (very) short and intense periods of activity/excitement/bowel-loosening fear. If you sit down and think about it, you'll be waiting for something. An Amazon delivery, an e-mail, a phone call. Some news about a promotion at work perhaps. For the Marines, if you're Wayne County - he of the Electric Chairs . Some people like waiting, qv Andy's opinion above. I'm not so sure. I often think I should be doing, not waiting.

I'm here now. Then, there were two of us, at least. Here is inside; a roof, a bed, boots that fit, almost. Footsteps in the corridors, rain on the window pane, the scuttle of – well, let's say mice. We fought off worse things by the side of that road. I paint the ceiling with my dreams and I watch them through cataracts. Sometimes, as I was then, I am 'us' or 'We'. And the boy, and the man with the rope around his neck, or even the man holding the rope.

It's funny: I am waiting. Waiting for the real thing. Not a metaphor. The room is small, with a window high in the wall. Yet the space in my head is more open than the road. It can be now, it can be then. It can even be a possible future, or all of them. Of course, I do not move from the bed. 'Why wear boots?' you think. Boots that fit are the mark of a gentleman, everyone knows that. Even... no his name will not pass my lips. Besides, I do not know if he is, was, or will be a gentleman: he never came. Perhaps tomorrow.

During the day, the experts break the monotony.

'Is it Parkinson's? Alzheimer's?'

'Who is he waiting for?'

At night-time it is quiet. I replay all the conversations, all the theories. If everything were symbolic I'd have said so. Not in so many words of course. I merely say that all signs are arbitrary. Or rather I don't. I lie here, and, during those same days or days that are the same, they come to look at me.Still, the night-time is my own. And Vladimir's.

And sometimes, especially if the night is as quiet as this one, I really believe that I will finish the joke, or that he– and tomorrow – will come.

Symbolic! Always returning to the same place. Sometimes nothing happening means nothing happens. And boots are just boots. I have boots. Yes, I remember. Was there a belt? Did something happen to it?

All nights are peaceful, because the other part of the day is when they come and debate turnips and radishes, for they cannot give me carrots. They decide on one or the other and another tranquil night is in prospect.

Yes, I am still waiting. It is not a metaphor. Here, in this place, I hold the other end of the rope tied around my own neck. I lead myself in circles. Tomorrow will bring another today. They'll come and try to decide if I am a shepherd or a goatherd, but they are only experienced with sheep and goats.

Talk, talk, talk. As well sing the same thing over and over.

Every day they remove the better part of me in pans and bottles. They will meet and discuss its qualities. Little is understood which comes from the other orifice, why should they discover any meaning there? Yet still they look. For meaning. It means nothing.

Yes, that's it. It's not a metaphor. I'm waiting for nothing.