Well, you're probably wondering what the state of play is. Unbound have a manuscript they say they are happy with, so Gibbous House is back in the sausage mach- I mean, production. Over the next few months this will involve a copyedit and proofread, etc. I may experience some slight deja vu on that front! The cover artwork will be addressed over the same period. Books are hopefully going to be sent out to pledgers sometime in December. A bookshop release is scheduled for the New Year. There is no indication of a launch party date as yet. This could prove interesting as I'm planning to move house and countries as soon as the house here in Spain is sold.

Anyway, I've grabbed a few unexpectedly free minutes to write this. I'm listening to an oldies radio station and wondering when they stole my record collection. Just played a few minutes ago was "Sha La La La Lee" by the Small Faces. A propos of this, here is a short story inspired by, but not particularly about, another of the midget mods' records. 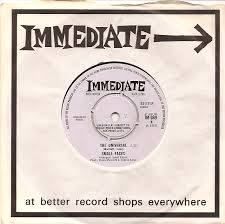 He was pinched looking, a skinny runt who shivered in the vicious wind. His expensive leather jacket would have suited a heavyweight biker. On him it looked like something robbed from his father’s wardrobe. I glanced down at the thing in his hand; a round piece of plastic a bit more than 15 centimetres across. There was a paper label with a hole in the centre.

‘It’s the future,’ he laughed then and he looked like the 20-year-old mothers wanted for their daughters. ‘Or maybe the past.’

I had it in my hand by this time. I mimed throwing it as though sending off a toy for a dog to chase. He gave a flinch and looked as though he might bolt after it. We both continued to look across the flat area. The ruins of the stadium stood guard over Tower Hamlets on the other side of the water.

He said something else then but an alert came through on the Bud. I brushed my fingers across the lump under the scalp just over my right ear. The voices stopped.

He took the plastic from my hand.

He loped off towards the Stadium. So I followed him. I switched the Bud on again. Even Alphas could only go off map for a short time. Your verbatim report had to be made via the nearest ATM at the earliest opportunity.

It was still impressive. The wrap had been a disaster within a few short years. What had been little more than a gigantic plastic bag wrapped around the stadium was a few fluttering scraps of polyester and polyethylene fluttering from the rusting metal skeleton. It had seemed an important place once. No-one remembered why.

Before, something happened. I knew I had had a job. I remember a brass plate and the letters CEO. I remember a window. It looked out over the stadium, from across the water. I remember neon: HSBC, RBS, Accenture. There was someone I lived with and I remember thick carpet under bare feet. There were some riots which lasted barely a week. I don’t tell people I remember these things. It’s easy to lose Alpha status.

The first thing I'm really sure about is the day a huge pantechnicon turned up outside the Olympic. The name on the side was recognisable; things hadn’t got that bad in only a few years. Most people recognised it as something they’d once used every day, when being on-line was more important than thinking about your next meal. A man in a white lab coat came out of the back. The guys with him didn’t look armed, but it was clear what their purpose was. As soon as the huge lorry had turned onto the cracked tarmac of the access road, people had started coming down the rakers and filtering out of the entrances to the Hamlets’ side of the Olympic. I'd looked at the pens in the breast pocket as the man in the white coat began to speak.

Like most people, ‘won’t starve’ was all I cared about.

When they’d fitted the Bud, they’d said it wouldn’t hurt. They’d said it would be just like carrying a mobile phone, we still remembered those, didn’t we? I still remember them, but I’ve forgotten some other things. Some things I used to know. I used to know what the thing was that the girl in Peckham tried to show me last week. It looked like one of those old-fashioned computer monitors. I couldn’t let her tell me what it was. That’s not allowed.

I think I used to know what the boy’s plastic thing used to be, too.

The boy’s shelter in the stadium was better than mine had been 30 years ago. He had electricity, somehow. Maybe a few of them had scavenged a generator. He was standing by a cloth covered box, plastic disc in his hand.

I was sorry to have to do it. He was so young. As for what the thing was, the Bud was switched on and that was that. Later, I did throw disc along the banks of the River Lea. One day The Universal might let me have a dog.