Well it hasn't actually started yet anyway, but...

The copy-edit is in Unbound's hands... I suspect I'll receive the Copy-editor's queries shortly, which means Unbound will send them to me, I will make the recommended changes and then it will go back to the copy-editor again and then ... well, you understand. In any event, here is some flash fiction, read it, or not, as you like... 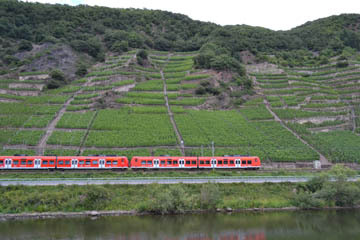 Afterwards I called him Cotton-Eyed Joe. For a stupid novelty song that had been in the charts when I had last lived in Germany. There was nothing so unusual about him, apart from what he was wearing. His clothes were the traditional builder’s costume and a little threadbare. I presumed that he must have bought them from the stalls in the Museuminsel Flea Market, where it would not have been cheap to buy an authentic Kluft. I couldn’t imagine why he had. He didn’t look like a bricklayer or a mason. He’d fiddled with his black hat since I’d entered his compartment at Berlin Central. I watched him turning the brim through his hands as though it were a rosary. He might have been thirty or sixty and he looked thin.

I’d felt strange not beginning a journey from Berlin Zoo. I was on my way to Damgarten. In no hurry, I’d chosen to book a ticket on the stopping train north out of Berlin, with a change at Rostock. The Deutsche Bahn still ran some stock that I had travelled on in the 80’s, though that had only been permitted in what was called West Germany. This carriage, however, would have been thirty years old even then.

The nod I gave the man as I sat down was not returned, exactly. He continued turning his hat brim, moving his own head backward and forward all the while. I put the ear-buds in and listened to Orchestral Manoeuvres in the Dark.

The suburbs flashed by. There was still a lot of dull concrete a quarter-century after the wall came down. Eventually the buildings thinned out and the rain turned the flat grassland grey and the forest black. I was nodding off when the train stopped. We were at the edge of the dark woods. I checked my mobile, which told me that I was north of Oranienburg or that I had been when the signal dropped out. The man stood up, placed his wide brimmed hat precisely on his head and made a very slight bow, before stepping out of the compartment and into the passageway. There were no passengers to impede his progress to the carriage door, or my view as he made it.

The dark edge of the trees was around one hundred metres from the track. Doubtless there was a rule dictating how near the tracks might pass whatever kind of tree was growing there. The man was striding towards those trees, back straight, the one hand clamping his hat to his head his only concession to the driving rain. It did not take him long to cross the field to the woods. He didn’t stumble once and it must have been slippery underfoot. He was gone and the train began to move. I took out my ear-buds. I had an ohrwurm, an ear-worm. Nothing to do with Enola Gay.

There was an announcement by the train guard: something about a delay, an obstruction on the line. I glanced down at my phone’s screen. Pressed the icon to get my location. ‘Sachsenhausen.’ It read.

Where did he come from?

Where did he go?

The inane song’s melody with its fiddle and stomp chorus filled my head and although I thought I might search for the answers to both questions. I thought it better not to.