Something to Read, while you wait... and wait 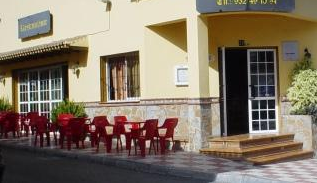 [Picture was from La Higuera website, and I asked the owner personally if I could use it, so there]

It's quiet in La Higuera. It means The Fig Tree. Maybe you know it, a family run bar and restaurant on a corner site, one hundred yards down the hill from one of the town's High Schools. Tuesdays and Thursdays I find half-an-hour in my busy schedule to blow the change in my pocket on a small beer and a tapa.

The girl...When did women become girls? I know she must be in her twenties. Oh yeah, they didn't become girls, I just got old. Well, Ana, I think it is, on this particular Thursday, puts un tubo and some boquerones on the bar in front of me. I get a smile, but then I'm the old Guiri, who always tips. What use is all that change in my pocket, after all?

I'm just savouring the sweet-vinegared taste of the tiny fish when the shouting starts. A huge bear of a man is wearing bermuda shorts and a stained T-shirt. He looms over Javi, the – what? Manager I suppose. Bear Man is chest-poking as well as shouting. I make the same assumption as you are making now, but no, he isn't English. He is Alhaurino, Alhaurino Cateto. That is, he is from the town, a real town yokel. He's shouting Spanish, but not as we know it. I can see the spittle raining onto Javi's clean white shirt. There's only a sip gone from my beer. What other customers there were inside have melted away. The old men are still at their table on the terrace outside. For all I know they never move from their seats, except today they are craning their necks to look through the window at the show.

Javi's back is against the bar and he decides it's time to finish the dosey-do by pushing and shoving the Bear Man out of the main entrance. The old guys at the table outside have their noses pressed to the window. It's hard to see the front of the restaurant from the terrace at the side. The cook, Javi's mum, probably, shouts at Ana. She wants to know why she hasn't called the police. Ana looks out the window. Bear Man is giving Javi a few slaps. She gets her mobile out. She probably doesn't have the Policia Local on speed dial. I think Javi is handling the situation well, avoiding the blows and attempting to calm the man down. Bear Man doesn't think so much of this. By now all the neighbours are standing on the pavement or on the balcony of their apartments. Javi is being chased up the street.

I've still got half of my beer left. The fish are gone though, I can't remember finishing them. I ask Ana what it's all about. “Esta loco” - he's mad, she says. “Enfadado?” - angry? I say, although I know they are not the same thing in Spanish. Ana shakes her head and makes the universal sign for loony with her finger to her temple. Andalucia is not the most politically correct of regions.

Bear Man has chased Javi back down the street. He must be fit. The local police arrive. Bear Man quietens down and is taken away. My glass is empty, I nod at Ana and leave by the side entrance. The balconies are empty too. The old men have straightened their hats and signalled for another coffee.