Unbound expect to recieve Gibbous House from the copy-editors on the 29th of April. I expect to receive any resultant queries in the first week of May and there may be a bit of back and forth concerning these, although I hope (given the amount of work put in by Rachael Kerr, Unbound's editor-at-large, before the copyeditor even saw a manuscript) that they will be minimal and take very little time to resolve. At the same time work will begin again on cover design and cover copy. So, things are moving. Thank you all for your patience. Meanwhile... 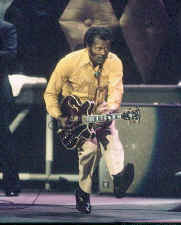 "Meanwhile, I was STI-ILL thinking..."

I was in the last bar on earth with a real jukebox. That's right, with vinyl 45s. In Washington D.C. - halfway between Georgetown and Adams-Morgan. Charles Edward Anderson Berry was playing loud. How did I get there? I didn't remember. The beer in my hand was not a craft beer, it was a Miller and not even "lite". Chuck was belting out "Little Queenie" and the gal behind the bar was real cute but was ten million minutes over 17. Besides, the record machine was over by the 'john'. Everything was wood and brass. This place was ... Well, I doubt anyone would have believed a place like it still existed then. Hell, I didn't and I was standing there with a foot on the rail and an eye on Madame Bartender.

It was my first time across the pond, I was 28. Ordered to Washington. I had been sent with a Sergeant to a Big-Beast Defense Contractor's HQ in Falls Church, VA. We'd been sent to conduct final acceptance testing for what was to be a massive computer upgrade in the UK's Berlin listening post. Yes, they had sent a Sergeant and a Corporal. The UK's listening post was actually 'nested' (some would have said 'cuckoo-ed) within the much larger US facility. We tested the equipment for one-and-a-half days out of a scheduled 28. At the final acceptance meeting, I said we wouldn't be accepting the system for delivery. The meeting stopped and the company's US military advisors asked for the room. We were told to stay. It was a long argument. We lost it. Or I did, the argument, that is. I had found out why two such lowly forms of life had been sent to do such an important job. The Sergeant said only two words throughout, both to me, 'that's enough.'

It was strange to go out into the sunlight again. Like leaving the cinema during the afternoon.

'Transport's at 6, to BW International,' my superior said.

I grunted, already striding off to the Metro station.

I waved an arm but didn't look back.

Washington was fine that September. You could drink your way down the numbers and along the letters until you couldn't count or spell. So I did. By the time I was in the bar with the last juke box, I had the careful diction of the completely smashed. I was owl-eyed, newt-pissed, as legless as Long John Silver.

'You're a long way from home, Sir,' said Grace from behind the bar.

I took another belt from my Miller and reflected that the only people who called drunks 'Sir' in Britain were policemen.

'Yuh must be frum somewhere. I'm from South Carolina.' It came out Cah-lie-nuh.

She went over to the juke, put a few coins in. Mr Berry began singing again. 'No Particular Place to Go'.

She told me her whole life story before driving me back to my hotel in Falls Church, when her shift was over at five in the morning. I watched and waved at the car after she dropped me off. The Sergeant was waiting for me in reception. He'd packed my bags. He handed me my passport and visa.

When the minutes of the meeting were sent out to Berlin, I was surprised to find out that I hadn't been at it, though the Sergeant's name was there on the list of attendees.

(Of course, it wasn't quite like this. Apologies to the other person who was there. We both shouted to no avail :-D)