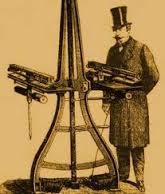 The candles' reflections lit the man's pate. His head bobbed like that of a hungry chicken. The other occupant of the workshop grinned.

“Bien sûr! It will work. It is a machine based on that most perfect mechanism -'

Giovanni blushed to the roots of his remaining hair. The stylus wove its pattern on the tin-foil. The pendulum swayed slowly and precisely.

'Ha! We test it, but our knowledge of the result arrives no faster than the soldier's horse.'

A guffaw cracked the priestly mask, but Giovanni made the sign of the cross afterward.

The room - hall rather - was quite, quite full. Soldiers, diplomats, scientists, gawpers of a certain quality and, of course, the Emperor himself, contributed to a current of susurration. Like an expectant audience in the old Folie Richelieu, the assembled crowd looked at each other and then towards the raised dais. Leon winked at Giovanni: they would give them a show, but would they understand it? Leon wished Gio would dress a little less like a country priest who had forsaken the soutane, but didn't want to leave behind the heavy black cloth. Leon's own attire was tasteful, but in bold colours. The lovat green of his topcoat drew the eye and he stood within arms length of the pendulum, drawing attention to Gio's machine.

Leon spread his arms wide. Gio lifted the repeater in his hand. Out of the corner of his eye, Leon saw that it shewed midday. Dropping his hands with a flourish, he made sure that all – especially the Emperor – could see that he had touched nothing on the apparatus. The pendulum began to move. Gio was biting the corner of his lower lip. The fingers on both hands were crossed.

'The pen is moving!' The Duc de Fontagne said his line with gusto. No-one realised that he could not possibly see it from below the dais. Still, its purpose was achieved. The Emperor Napoleon III himself was craning his neck in a vain attempt to catch sight of the moving finger of destiny.

Only the Emperor himself and Eugenie could fit on the tiny makeshift stage. Decorum prevented the ministers and minor nobility behind them crowding onto the dais. They remained on the stairs jostling for a sight of the machine. The stylus attached to the pendulum hunted and pecked like a chicken in a farmyard. Paper was stretched over a metal half-cylinder. Leon saw his Imperial Majesty stifle a yawn. The Empress Eugenie picked at a fingernail. Leon gestured to Giovanni. He plucked the paper from the metal and immersed with a pair of ornately carved tongs. Accidents were possible with Potassium Ferrocyanide. The drawing was indistinct, but it was clearly a bird. The name Caselli was written beneath it, in smudged blue ink.

The doors to the great hall opened and Froment ran in, brandishing a sheet of tin, the same design was visible to all.

'Wonderful,' The Emperor said. 'What a pity one can't be in two places at once to appreciate the ingenuity of the device.'

'Madre de dios, Louis-Napoleon! If we could be in two places at once we wouldn't need this contraption.'

The Emperor turned watching crowd in the hall,

'I like it. See that we encourage its development... What is it called again, Maestro?'

'Facsim-', Leon started to say the Latin, but Giovanni interrupted.

Gio is Giovanni Caselli, inventor of the pantelegraph...

Since the former is Italian and the latter French, I fancy they might have spoken a melange of Italian, French and Spanish, although there is no evidence that they did. I have yet to see their correspondence in the original language(s).

There is no evidence that Foucault was at the 2nd (and successful) demonstration of Caselli's invention, but he did advise on the construction of it. He was the expert on pendula, if not pendejos.