Still on holiday in Albacete Province. It's uncanny how few young people there are. Yes, it's a tiny village with two cafes, a bakery and a -well- we English Guiris would call it a mini-market at best. One name the Andalucians have for it is an 'ultramarinos', but throughout Spain they have 'Supermarket' written on the sign outside. They are corner shops, but here's the thing. Their staff in other places in Europe would be young people in McJobs. Not in this area.

So where do they go, the young people? School is out, but I've yet to see any disaffected youths hanging round bus shelters. Oh, that's right, the bus route is down on the main road, 8km away via the Camino Local. This is my second visit to the area, I knew what to expect. I'd like to see photos from the Franco era, just to see how different the village looked.

I took the photo with my camera a couple of days ago. There's a poem of sorts underneath it. 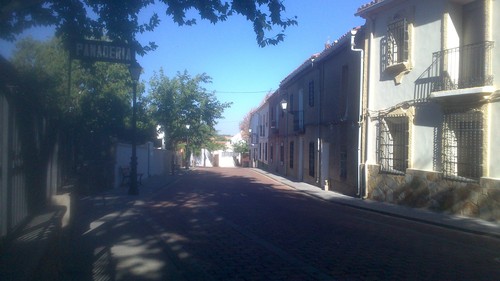 Outside the bakery are benches,

they are empty today.

Formerly there were Tios,

This was the shady side of the street.

Opposite there is sunshine,

lighting part of the way.

Formerly there were Tias,

and under dour mantillas.

This was the distaff side of the street.

Everywhere there is no-one:

Formerly there were niños,

and over dusty cobbles.

This was the happy side of the street.