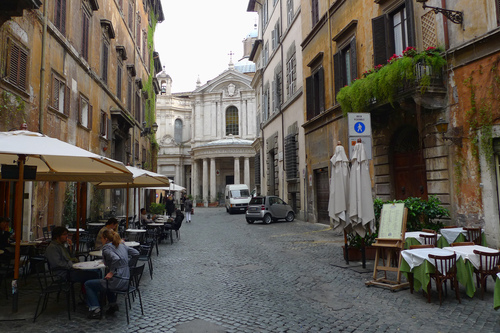 I've just returned from a trip to Rome. It remains a wonderful place although there are more beggars every year. Still less welcome are the "entrepreneurial" touts, lanyards round their necks, but with the identification card missing. Touts for restaurants, touts for taxis, touts to help you with the frankly daft system of ticket validation on the railways. This is Italy remember, there will be someone on board in a uniform with gold braid to punch your ticket. Pickpockets abound in all the main tourist areas and, of course, there are the prices. If any country has really seen massive price increases since adopting the Euro it is Italy. Spain's prices have increased, but gradually. I remember spending Lire in vast quantities only to discover that I had blown the equivalent of a couple of pounds. The sums are easier with the Euro, but not so pleasantly surprising.

But it is beautiful, even the equivalent of the Ministry of Ag and Fish is housed in a striking building which is hundreds of years old. Rome's Pantheon is impressive indeed: almost two millenia old. My friends and I were disappointed – especially those who hadn't seen it before – to find the Trevi Fountain obscured by scaffolding, and protected from the public by a raised walkway. When I was last there I just walked up to it and chucked my copper into the water. As you know from reading this, the charm worked, although the fountain was a let-down, but only until I thought of what might become of the Trevi or the Pantheon or half of Rome if it were in Assyria. So I was much cheered to see preservation instead of religious vandalism. And then – being truly British – I remembered that Leptis Magna is in Libya.

Well, this has very little to do with Gibbous House, but be assured I'll write some news when I have some.