No News at All

No news this week. Anyway, for you stalwarts who still read past the title and the re-iteration in these posts, here is one of my favourite stories. It's no recommendation, it's been rejected every time it's been submitted. However, even though it's unpublishable, honestly, it's not half bad.

The Most Beautiful Machines in the World 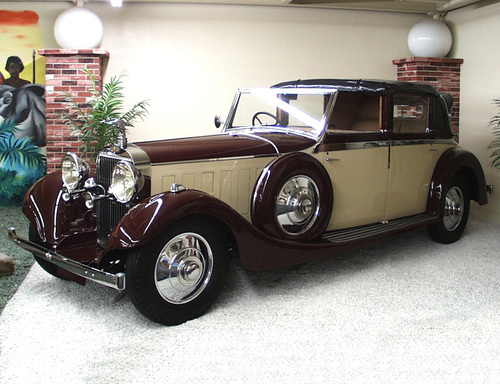 [I am searching my e-mails for the one from the man who took this photo, saying I could use it. If I don't find it, I'll remove it. Lovely car though!]

I waited all week for Thursdays. On Thursdays, my niñera had the day off, although she begged my mother to arrange another free day. My mother would tell her she was fit to call no other day her own. I believed I saw Maria crying more than once, afterwards. At 10 o'clock I would stand in the dining room, shoes shining, polished by unseen hands the night before. My father would not look up from the Critica, but he would ask me if I was presentable. In my reply that same word would struggle from my five-year old's lips: but I made sure to say the 'Señor', which followed it, as loudly as a Granadero de Caballo. My attire however, did not suggest any proud cavalry man: I was dressed in shorts and a jacket with altogether too much braid: the Admiral of a midget navy. The braided, peaked cap was a source of inordinate pride to me. Every night, it would be positioned in the centre of the second pillow that lay beside my own. On the 'r' of Señor, which perhaps I rolled a little extravagantly, my father would fold his paper and say 'Come!'

He was a tall man and I had to reach upward to hold his hand. My palm felt damp, compared to the dry sandpaper of his. We paused at the dark ebony hat-stand while father took his own peaked cap and placed it squarely on his head. This hat had less braid than my own. Two or three servants would watch us pass through the hall to the front entrance. Father's shoes echoed on the shining parquet: I believed he must be a film star - like the skinny, balding dancer in Los Movies Americanos that we sometimes saw at the houses of friends. My cousin Rafael's family had a real cinema in the house and one of the maids pretended to be a cigarette girl; while we watched the films that were never seen elsewhere, not even in El Ateneo. Ruiz opened the door for us, he bowed as he did so, and I always wondered if he polished his head, it caught the light from the chandeliers so.

Our house backed onto parkland. It was not the largest in the street. There were no small houses. We lived in Palermo Chico on the corner of Ombu and Martin Coronado. As we walked down the steps leading to the pavement, the car pulled up. It gleamed, whatever the season, whatever the weather; it shone as only a black automobile can. A uniformed driver got out and saluted us, clearly impressed by the braid on my hat. The driver marched away, perhaps to the nearest police station. My father took a moment to look over the vehicle. He began, as always, at the front grill, with a gloved hand he removed some speck – entirely invisible to me – from the beautiful silvered bird flying above it. He would always say the same thing,

'A stork to bring my baby, Gustavo. Hispano-Suiza make the most beautiful machines in the world.'

When he was satisfied with the condition of his motor, he would seat me in the front beside him and we would drive the streets of Buenos Aires, seemingly at random. The destination never changed. The black car would pull up in Plaza Italia and park, so that I could see the back of the statue from the passenger seat. A man sat astride a horse, pike in hand; his steed seemed frozen at the point the rider had begun urging him to stop. My father would say, without fail,

'Giuseppe is on guard, my baby is safe.'

It was not the statue which saved the car from the depredations of thieves and vandals; but boys believe their fathers, after all. At least, until they no longer can.

'Watch where you're going, Gustavo, not where you've been! If the danger is behind, so be it.'

I would reach for his hand again and we would walk the remaining blocks to Calle Serrano. On that street, long before writers and artists learned to fly over the River Plate, a blind man used to play a barrel organ in the company of a parrot. When my father no longer drove me in the Hispano-Suiza, I used to walk down Serrano and the blind man, or another, was still there. All the hours of daylight and some of the night – at least until the deepest winter – would find him playing arthritic dance tunes, whilst passers-by hunted for the smallest donation they could find in pockets. No-one produced a wallet or a purse. His confederate, the parrot, stood beside a battered, tarnished silver bucket. When the gullible could be persuaded, the blind man would offer a fortune in exchange for whatever change had found its way into the hat on the pavement, in front of the organ. The parrot would hop from claw to claw, stretch its wings and dip its beak into the bucket. A folded piece of coloured paper could be taken, gingerly, from the beak. The person whose fortune had been told rarely seemed satisfied. Most would crumple the paper and hurl it to the gutter, and the blind man would nod and say 'muchisimas Gracias', never failing to add Señor or Señora, even when not a word had passed between them.

On Thursdays, however, when my father brought me to Serrano - more often than not – the blind man would be surrounded by women, young and not so young. All them would be dressed in their very best, if much-mended, clothes. The high-heeled shoes shone but I could see the marks of a paint brush under the sheen. Every group looked and sounded like exotic birds, flown down from Paraguay and Peru to work in houses like my parents', to clean under beds and tuck children into them. My father would watch them, as fascinated as I. Sometines, when I did get bored, I would attempt to ruffle the parrot's feathers – but somehow the blind man would know.

'Strange birds are not to be trifled with, boy!' he would say.

And I would drop my hand to my side as if I knew what he meant.

Eventually, my father would ask a Juanita or Josefa if she would like to take a coffee. They would protest a little, but look at my father's uniform and the little boy holding his hand and say,

We would walk to the car. The woman would run a gloved hand over the bonnet and my father's left eye would close and open very quickly, several times. I would wink back, but he never smiled. My father would drive aimlessly around the Capital Federal, this time I would be in the back seat. Always, always, the woman would lean out of the window and look wistfully as we passed Tortoni, on the Avenida de Mayo. They dreamed of taking coffee and rich, rich pastries, perhaps served by distant cousins. My father did not stop. He never did, until we arrived at one or other of the public parks in the city. He would tell me to stay in the car and the woman and he would disappear for a while. Perhaps they went for a walk, or to feed the birds. Father would always return alone. The drive home was always less interesting and did not take so long.

The last time we went to hear the barrel organ, my niñera, Maria, was in the group of young women surrounding the parrot and its fortune telling bucket.

My father dropped my hand. It so happened that at that very moment Maria was reaching for the coloured paper in the Parrot's beak. The blind man must have bought a new supply, for the it was as red as the colour of blood. My father reached for the paper, and read it aloud:

The other girls giggled, saying 'Life is going to change' and 'Because of a man! Imagine that!' One of their number, her foundation a little thicker and her lipstick a little bolder, said softly, as if whispering it to herself, 'What a man to change it!'

Maria turned scarlet. She came with us to the car, but she was not happy - as the other girls had been. Cafe Tortoni passed us by while she stared out of the front windscreen, although there was more to see if you looked out to the side. My father left me in the car, as always.

Neither had returned, when a policeman looked in the rear window of the Hispano-Suiza. Perhaps he recognised the car. It was dark. I didn't know what time it was. He ran to a nearby building, a block of apartments, I think it was. Someone came to take me home, the car was not so good. My mother was in bed, although I was sure she stayed up later usually.

We went to live with my mother's parents in a house not too far away, and certainly no smaller. I stopped asking about Maria, because it always made my mother cry.

Thursday was traditionally the prostitutes' day off, in Buenos Aires.