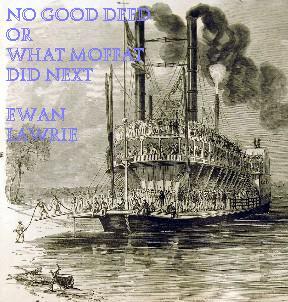 I do have around half a sequel to Gibbous House written, without giving too much away here are the opening paragraphs. Edited version March 10 2015.

No Good Deed or What Moffat Did Next

It was a relief to take my seat inside the coach, if only to escape the ripe odour emanating from the driver and, indeed, to leave behind what passed for a town in southern Missouri. My two fellow travellers proved notable for their peculiarities. They were fellows of similar age, neither seeming more than thirty. Both were possessed of prodigious moustaches and dressed in what I had come to view as the colonial style. This seemed chiefly to consist of wearing any mismatched colours and cloths cut in unflattering imitations of earlier fashions from London, except for the matter of what one wore on one's feet and head. They each wore the ubiquitous boots and a most peculiar hat. It came as some surprise when one of these fellows thrust out a hand and bellowed over the rattle of the wheels,

'Clemens! Both of us, that is. Pleased to meetcha!'

I took the proffered hand. It was not calloused, but the grip was firm and recognisably on the square. He held my eye as I switched my handshake to what was clearly his brother's hand and gave the name that had served me best.

'Moffat, at your service.'

It transpired that this Clemens and his brother were bound for the Nevada Territory.

'Orion has become part of the grand orchestra of the State,' Clemens said.

I enquired as to what instrument he played.

Clemens' laughter took some time to subside, before he enlightened me further,

'Hell, no! Orion's on his way to a job as Secretary to the State Governor. Imagine that! My own brother a durned parasite.'

His brother gave him a look of affection rather than distaste, which I found surprising.

Out of manners and nothing more, I enquired, 'And you?'

His eyes gleamed: there was something puckish about the fellow; as though he found me, his brother, the world at large - and even himself - a rich and satisfying source of amusement.

'Silver!' he said. He swept off his peculiar high-crowned, broad-brimmed hat.

'See! I've even got my Boss of the Plains hat! Got to help a Missouri boy get ahead, after all.'

He pointed at a crudely fashioned maker's label inside the lining. I could not read it in the poor light inside the coach.

'JB'll be as famous as Mr Samuel Colt, or I'm a Dutchman.'

I doubted that, the hat was ugly and hardly suitable for a gentleman. It would not have surprised me to learn that the Clemens brothers had been the only purchasers of this innovatory item. Evidently, Mr Clemens was possessed of an unseemly curiosity, for he chose to enquire of me,

'What brings you here, Mr Moffat? You ain't a prospecting type, I reckon.'

'Prospects interest me, not prospecting.' I said.

It was a foolish answer to give such a curious fellow.

'I can tell you're a swell feller, ain't he though, Orion? I reckon we'll rub along fine with him.'

I was unsure whether the fellow could be quite such a pudding-head as he appeared.

Over the next few hours, Mr Clemens junior kept a running commentary of the things he expected to do, and the enormous fortune he expected to make, in the booming frontier towns of Nevada. This fascinating subject exhausted, he began to regale me with the qualities of the wondrous seven-shot pistol he had brought along to defend himself on the wild frontier. He avowed it to be a marvel of engineering so sophisticated that it had taken two fellows to design it. A Mr Smith and a Mr Wesson. He was so enamoured of it that he declared himself prepared to overlook its only fault: that one was unable to hit anything with it. Almost every anecdote provided him with an opportunity to blow such gales of laughter as ought to have despatched his sibling's ridiculous hat out of the stage- coach window. I began to look forward to our arrival in St. Louis. Mr Clemens informed me that the next stage of their journey would be by steamboat from thence to St Jo, where they would once more try the overland stage.