I have received the finished artwork for Gibbous House's cover. Very nice it looks too. The next step is for the book to go to press after second proofs have been checked.

Anyway, here is a deleted scene from the book. It didn't move the plot along, so it had to go. However I retain a fondness for it. See what you think: do feel free to comment. 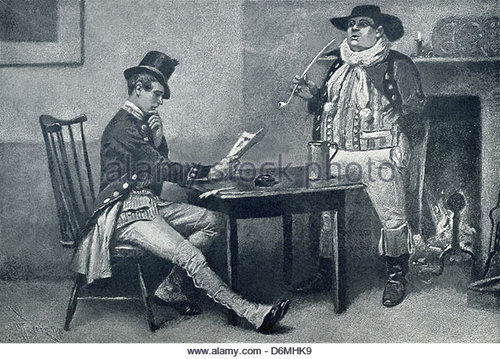 Two gentlemen of the mercantile class followed, so alike in demeanour, dress and deportment as to have been twins of the kind seen in a circus. Two more followed, their conversation convivial and loud; they were either of deep acquaintance or overcome by the instant and superficially profound cameraderie peculiar to travellers.

The contrast between this latter pair could hardly have been greater. Of an age, one struck a remarkably healthy figure, from the soles of his high-topped boots to the astounding whiskers via his proudly bantam chest—if his clothes were not the height of fashion, they had been costly once. His boon companion seemed sickly in comparison, possessed of a narrow trunk and the high forehead of an aesthete; his clothes differed greatly, being at once new and shabby and worn with the indifference of one with his mind on nobler things. He carried a notebook close to his chest. I turned my eyes from them to our repast, which consisted of a hearty broth and bread that needs must be submerged in it, else we should have been the poorer a tooth or two afterward. Hungry and cold as I was, I could not enjoy my victuals. The aesthete was staring closely at me, speaking to the large fellow from the side of his mouth and writing in his notebook from time to time. When his companion brayed a laugh that would be offensive in most polite company, I could take no more. Striding to their table, I enquired of them:

‘Are you mocking me, sirs?’

The aesthete made no reply, he merely stood and offered his hand: ‘John Huffam, sir. It is an undoubted pleasure to meet you.’ Huffam seemed quite unperturbed by my hesitation to take the proffered hand, though I knew that that alone was sufficient to insult a gentleman. The name I gave him was not mine own, I have long forgotten what I told him, save I fancy the initial letters were S.C. His companion, who seemed with each passing moment still more the image of a blacksmith at a wedding, thrust out his hand in rough and ready style, announcing himself as ‘Merely Sam.’ It will give an impression of his gaucherie that he remained in my memory as exactly that: Merely Sam.

I addressed the artistic looking fellow: ‘Sir, I could not help but notice you regarding me, nor the animated conversation and the d_____ scribbling that followed, and I ask you, what do you mean by it, sir?’

His smile was insouciant and galling.

‘I meant very little by it, sir. I am, in my small way, a writer. I observe, and having observed, I make notation, in case I should forget.’

‘I don’t think I care to be a figment in some scribbler’s pamphlet. Let me see sir, what you have had the temerity to write about me.’

Huffam smiled and handed me his notebook, and I opened it to a sea of cuneiform shapes and irregular lines as incomprehensible to me as Egyptian glyphs or Nordic runes. There was little I could say. I returned his book:

‘I’ll thank you to keep yourself and your book from my sight for the remainder of our journey, sir.’ Again that infernal smile spread across his face: ‘Gladly, Mr C______. My companion and I are leaving the coach here, after all. I wish you the joys of my former seat, should your means prove sufficient to take it.’ Although incensed by the beginnings of a grin on Merely Sam’s face, I preserved my dignity and showed them my back. Accosting the coachman, I counted out the coins from my ever-lightening purse to purchase the inside seat.

As was meet, I allowed the other passengers to take their seats before boarding myself. The young woman — and the man she introduced as her uncle, the Reverend Elias Parminter — sat cosily together as might have befit exceptionally dear relatives. One of the pair of merchants sat cat-cornered across from his counterpart. Whether the dark expression mirrored in their faces was occasioned by this separation — or the reverse — I could not tell. Haply this left me the space vacated by the two recently debarked. As the coach departed I caught sight of a crumpled sheet of paper by my boot. It appeared to be a page from Huffam’s notebook. For some reason, he had written it in a civilised language, rather than in the nonsense I had seen earlier.

I smoothed it out and read it: clearly his newish clothes would have to last him a lifetime if this were a sample of his work. Having crushed the sheet and thrown it through the window with some venom, I shook my head and laughed. It had read: