Inside the Moffat Sequel... 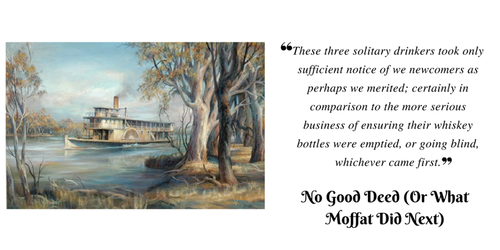 [I made this on canva.com, the original image was CC-0, but it might not be now, who knows, I'll give it a week]

Spoiler alert... (for Gibbous House that is) Moffat washes up in America. After around a decade of nefarious deeds on the Eastern Seaboard, Moffat is penniless and decides to make his way south via stage and riverboat. More or less on a whim Moffat assumes the identity of another murder victim, Anson Northrup, gentleman gambler.  As usual the power of coincidence involves Moffat in schemes and plots, only this time it really seems like he might be on the side of the angels.

Here is an excerpt set on the Grand Turk riverboat, which you might enjoy...

The clientèle was entirely male: although aside from Mr Haycock and myself, these numbered only three: all standing as far from each other at the bar as space would allow. Each had a whiskey bottle and a small glass fit to contain only the product of a brief inversion of said bottle. I imagined that there might be more profit in Mr Northrup's alternative profession than the taste of Number 13 had led me to believe. These three solitary drinkers took only sufficient notice of we newcomers as perhaps we merited; certainly in comparison to the more serious business of ensuring whiskey bottles were emptied, or going blind, whichever came first.

Haycock smirked and gestured to a rough table. Though not of exquisite craftsmanship or any particular value, it had – perhaps wisely - been bolted to the deck. The chairs around it had not . We sat facing one another with the whole width of the round deal between us. Haycock's glass being empty he filled it and poured a lesser amount into mine, since it was yet half-full.

'Call me Bill,' he let out a laugh, mayhap occasioned by the unbuttoning of my frock coat and the glimpse of the waistcoat it afforded.

'Anson, you may call me, if you like,' I retorted.

'Weeeeell, Anson, how 'bout a little Poker?' He produced a grimy, dog-eared pack of cards. 'Guess you know the English deck, huh?'

'Of course, I am recently returned from there.'

Familiar as I might have been with the 52-card pack, I knew nothing of Poker, save that it was the game of choice on the river. I had not thought to play myself before a chance to observe others first. Fortunately, I had experience of both drawing and gaming rooms in London, and did not disgrace myself when he handed me the grubby pasteboard. A simple riffle, followed by a hindoo and I handed him his cards, which he accepted with a grunt. He dealt the cards in singleton fashion and then produced from his pocket a quantity of markers about the size of small coins; painted in various colours which had faded through time and handling. One of these he placed atop the stock.

'Got no markers, Anson?' His eyebrows lifted.

He swept all but the marker on the reserve cards into his hat and dropped the headgear to the floor beside him. Then he placed Half-Eagles, Quarter-Eagles, silver dollars, and lesser coins, right down to a half-cent, on the table in front of him. I emptied my pockets in imitation though with less resultant noise on the wood of the table.

He picked up the cards, as did I. What I had appeared valueless, being of various suits and non- consecutive in number. I had not even a pair. Bill looked at me expectantly: I pushed a copper penny towards the centre of the table. Bill's laugh was hearty and his bet was twenty-five times the value of mine. I matched it.

'How many?' he picked up the stock, brushing the marker to the side.

I kept two, an Ace and pipped card of the same suit. Bill dealt three in quick succession.

'I'll take two,' he said and dealt himself the cards.

My situation had improved, I believed, basing my assumption on my experience of ale-house Brag in Cheapside. I laid another quarter on the table. Bill pushed a dollar forward. It became merely a contest of wills, in my view. My means being exhausted, my opponent appeared to take pity on me saying,

I laid the black Aces and Eights on the table and the Jack of Diamonds beside them.

'Well don't that beat all!' He guffawed and I saw tears start to his eyes.

I reached for the pot, but he stayed my hand and revealed his own; red Aces and Eights with the Jack of Clubs for company. He pointed a long index finger at my chest and said,

'Yessir, Anson Northrup, you are either the luckiest - or un-luckiest - man alive.''

No news on a publisher for No Good Deed, but I'll keep you posted.