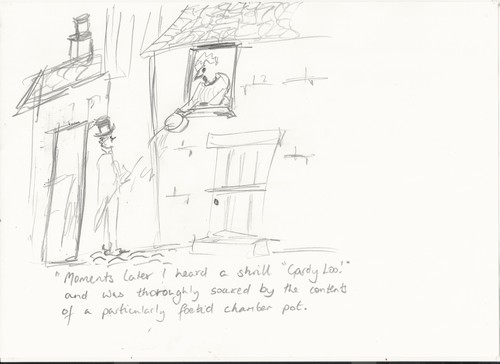 Yesterday I finished writing the character requested by the generous contributor who pledged the sum required to be allowed to name a character in the book. I also managed to weave the episode into the existing narrative. Maybe you won't be able to see the joins, that's a question I'll have to ask my editor.

Even so, it was an interesting thing to do, I had to put myself in Moffat's head for the first time in a while, but after about 100 words it was like putting on an old pair of shoes, very comfortable.

Ever wonder where the word 'loo' for lavatory comes from? The OED says its origins are obscure. One theory is that it comes from an anglicization of the title. 'Watch out, Water!' The sketch should give you the idea.

Moffat, as readers of Gibbous House will find out, is an impostor. I like the idea of characters pretending to be someone else. What pressure there must be to keep up a pretence on such a scale. I leave you with Ambrose Bierce's definition of an impostor:

A cynical man, the author of The Devil's Dictionary, but a very funny one too.

As I write, Gibbous House has reached 56% of its target, well done, everyone.