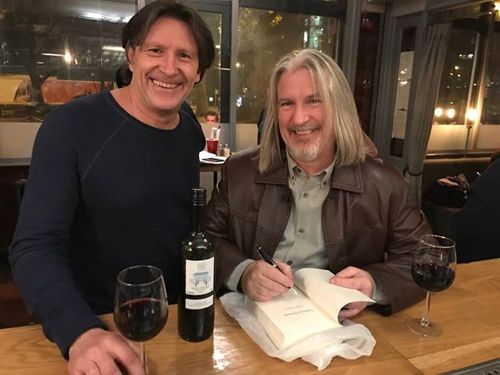 [From my own camera phone taken by the barman]

Adam and yours truly at The Blacksmith and The Toffeemaker

Well, I arrived back on the 25th November from a whirlwind trip to London to sign special edition copies of Gibbous House. “27 hours, 3 airports, 100 books signed, plus 1 reconnaissance mission to the site of January’s launch party” – oh, and a chance meeting with a Royal Air Force Wing Commander in the hotel bar. Those of you who know my great friend Adam will know just who struck up the conversation with such a rare beast in the Kings Cross Royal Scot Travelodge at 12.00 a.m.
Adam and I had met up because he (and I) was disappointed he wasn’t going to make the Gibbous House launch party in January. So, in the way that good friends can, we managed to meet up with a mere 24 hours notice in London.
I can report that The Blacksmith and Toffeemaker hits the optimum blend of the Bohemian and boozy, at least from what I saw two Thursdays ago. 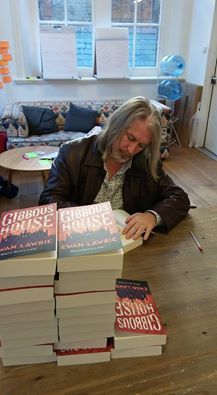 [From my phone, I think Caitlin might have taken it]

On the following morning, I got up early with a fuzzy head, packed my tiny rucksack - toothbrush and pants, if you must know - and attempted to make sense of Google Maps' directions to Unbound near Regent's Canal, somewhere near the Angel, Islington. This involved a long walk up Pentonville Road. For a country rube (Cateto in Spanish) it was a bit like virtual reality Monopoly, for obvious reasons. After a couple of stops for fuel - coffee, that is - I turned up at the Unbound offices. Many thanks to those at Unbound, especially Caitlin Harvey, who made me very welcome and answered all my stupid questions. If you're one of the lucky people I signed books for, the message reads "Thanks for making this possible", plus my signature which is still less legible. I managed not to get too tired by drinking more coffee. It only took an hour and so I made my way towards St Pancras to have lunch before catching the train to Luton.
It was only 12 so lunch was a bit hard to source.
I ended up in a "cockernee pab" in a back street. The owner was a gruff and skeletal fellow who might have been 30 or 60.
"What time is the kitchen open?" I said, after embarrassing myself asking if he had Guinness on draft when the promotional item was on the bar in front of me.
"In ten minutes, when I get 'er up." 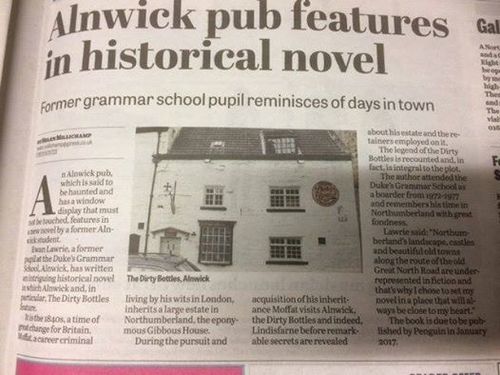 From the Northumberland Gazette

The food was great - and Thai, by the way - like the lady who cooked and served it. The pub's called the Dolphin. The only other person in the bar was a guy in his late fifties. He was on his phone, telling the person on the other end that he was working in an open-plan office. I suppose he was.

Whilst at Luton, waiting with three delayed planes-ful of people travelling to Poland, I got the above picture on my Facebook feed. Gibbous House has featured in a newspaper, and it's not even on general sale yet.
So, all in all, an awfully big adventure, but boy was I tired when I got home.