...nothing at all, save that another week has passed, here is a short, almost ghost, story, I wrote a while ago... 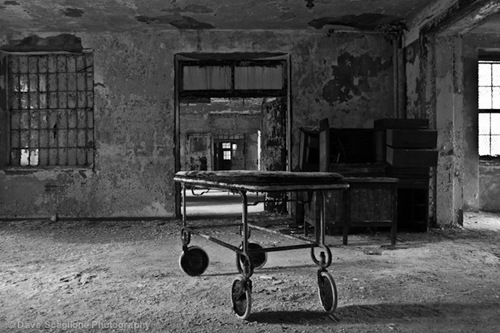 There should have been a storm, a hurricane or a tempest. Not a grey sky and the fine drizzle that gets a man soaked before he knows it’s actually raining. The room’s window looked out on this dismal prospect. Tuesday’s weather would have been ideal for the funeral, but not for the day Leviticus Catchpole actually died. Did everyone hear their own death rattle? That was a good question, easily as good as those about falling trees in a deserted forest, and ticking– or non-ticking -clocks in empty rooms.

His body was still in the bed. Not his bed, not the ‘lit matrimonial’ as he’d once called it in front of an over-paid companion. The man hadn’t got the joke, but Leviticus hadn’t been paying him for that kind of French, as the catamite might have put it himself. No, this bed was in the Sanatorium. Thanatorium was more appropriate. Especially as Catchpole was unable to discern much difference between being alive and not. There were no visitors now, but nor had there been before. There was no hum of distant and – yes, futile - medical activity, but then he hadn’t heard a great deal before the sound of his own demise. The Swiss did most things in silence. A nation of librarians, whatever their profession.

On the whole Catchpole would have liked to have gone the way of Yeats; surrounded by his lovers after a late blooming of creative productivity. Even the lovers on their own would have been good. Nothing (good) had appeared with ‘L.C. Catchpole’ under the title since ‘Mr Harris Catches Another Bus’ and ‘Adios a Barcelona’.

Great days: the self-belief of youth and the eternal nature of talent. And the boys, the beautiful, dark-eyed boys. Catchpole had known many who had died in that most uncivil war. Why did the artists always choose the wrong side? Catchpole had left Barcelona port on a tramp-steamer taking oranges to Buenos Aires. The Guardia shook their fists at the Bella Flor from the quayside. Catchpole had imagined their conversation in the bar later,

Indeed, he had left, but not before corrupting a few of the younger policemen themselves.

At that moment, Catchpole felt he should be laughing. His body did not move. He lay inert in the bed. He wasn’t outside his body, exactly. It was like… dreaming. Yes, dreaming.

A nurse came in. A Germanophone, svelte rather than cow-like. She picked up Catchpole’s wrist and shook her head. Then she pressed the bell on the wall beside the bed-head.

‘Say something, you damned Teuton!’

Clearly, the dead could feel anger, but even that was not enough to make the lips move and vocal cords vibrate.

A doctor came. He spoke French, which the nurse answered with a heavy accent. Catchpole was being pronounced dead. Pronounced ‘ded’ as any schoolboy knew. He wondered where he was. He wasn’t in the thing on the bed, not in the brain, not in the lungs, not in the heart. Even so, he still was. Cogito ergo sum and all that Cartesian codswallop. Not so ridiculous after all, apparently.

Would he follow the cadaver? He’d have to wait and see. The Doctor and the Nurse left. Catchpole heard the word for holiday before they did so. Perhaps his corpse would be there a while. There was no clock in the room. He would have to wait for nightfall for a clue to the time.

Memory and memories seemed intact – or better than before the last meal that had come some days before his expiry. He found himself remembering others’ death beds. Battersby, who’d refused all food because he didn’t want ‘a malodourous end’. Catchpole had written the poetaster’s obituary for The Times. Some sub-editor had cut a reference to Battersby’s oeuvre being likely to linger like a bad smell in the minds of the literate for years to come. His mind – if his mind it were – flitted to Cosgrove. His gothic novel had been the dernier cri during the war. Until Catchpole had suggested in a radio interview that the pacifist undercurrents were easily discernible to the careful reader. There hadn’t been the satisfaction of seeing Cosgrove die, but he had read the report of his demise under a troop train in Aldershot with some satisfaction.

When the muse had gone, it had seemed for the best. Catchpole did more than scratch a living as a critic. There had been a flat in Mayfair and one in New York. Few knew about the place in Tangiers. Those damned fools Burroughs and Keruouac had turned up and consumed a month’s supply of kíf in one weekend. The idiots were semi-literate, even by colonial standards. By the time anything had been published, of course, it was too late to give them the critique they deserved.

Night fell. Two porters came in and made off with the cadaver. Catchpole – was he still Catchpole? – felt no tug as his corporeal self disappeared on the creaking gurney. Neither did he feel he was about to ascend to some celestial plane. He felt… deflated, although he was struck by the incongruity of this feeling with his incorporeality. What if this was it? A spirit lingering like smoke, to be blown away by some metaphysical draught? What could be worse?

And then he knew. Limbo was hell and hell was limbo and he knew also, for the first time since his gilded youth, that he would have an idea and there would be something to write.

But he would never write it.