Hmm... thanks to all still reading these posts. 105%. Wonder what plans there are for the extra five per cent? Not a vast amount in the grand scheme of things. Might pay for a forty-word entry in the classifieds of the Costa Del Sol News, just between the offers of sexual favours at a price and nearly new electrical goods only slightly warm.

Now six per cent, I could find a solution for that. Anyway, here's a bit of flash fiction nonsense... 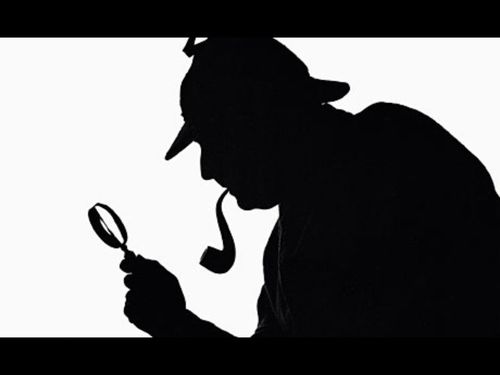 The Case of the Possessive Pronoun

'Watson! Watson! The door, man! Where is that damnable woman!'

I forbore to remind Holmes that he himself had despatched Mrs Hudson to a nearby pharmacist in search of a solution to the knotty problem of Holmes' irascible mood.

No sooner had I opened the door than two of the Baker Street Irregulars, Tobe and Todo, handed me a crisply folded sheet of quality vellum. Its pristine surface was marred only by the grubby thumbprint of one or other of the urchins. I dispensed a shilling, asking how they had come by the note. Had they found it? I asked.

'You weren't there!' Said Tobe

'So no-one gave it to you?' I looked at them both in turn.

'He did,' Todo pointed at Tobe.

'It was him' and the reciprocal action occurred.

I closed the door on the two irregulars, still arguing back and forth: 'did', 'wasn't' and so on.

Had I been in a subjunctive mood I might have read it then and there. But it was a condition of my relationship with the Great Detective, that if we received any communication that might offer the prospect of a case, he would be the first to peruse it.

'Holmes, a case perhaps!' I waved the folded sheet.

'But which case, Doctor Watson?' His voice was listless, without colour, indicative of his mood.

'Well, I don't know Holmes, I haven't read it. I would have read it, had it not been for the third condition of our arrangement concerning my publication of the accounts of your exploits.'

'Ah, everything is conditional on something, I find. Pass me the paper.'

He took the note in one hand, but made no move to open it, merely bringing the sheet to his nose.

'Ah, feminine, not masculine.' He sighed, the beginnings of a smile on his lips.

'How can you be so definite?'

'There is nothing indefinite about this article.' He held the paper aloft in a most demonstrative fashion. 'Perfume, Watson! The scent of a woman.'

He opened the sheet. His face turned ashen. One word passed his thin lips. 'Elementary.' He shook his head and handed me the paper, murmuring the word repeatedly.

I unfolded the sheet, but one word stained the vellum in a spidery feminine hand: