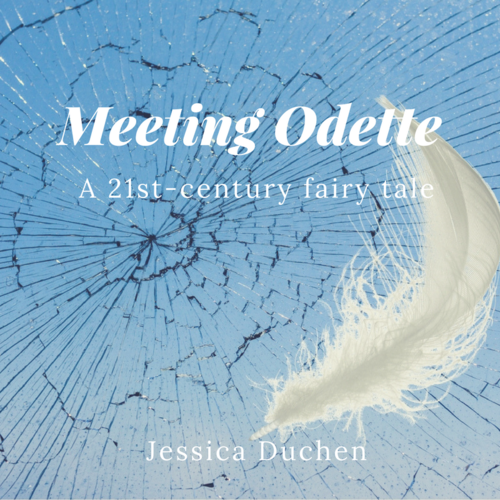 (This isn't the cover and it probably isn't the title either, but a kind and creative author friend came up with the image on Canva and sent it to me)

I used to have a recurring dream. I was in the library, looking for a book. I knew I'd seen it once before. I couldn't find it. It was a book of Swan Lake. I would always wake up knowing there was something inside it that I wanted, or needed, but I could never remember what it was.

I had this dream right through my childhood into my teens and beyond, in one form or another. At first it showed me Swiss Cottage Library, which was our local. On other nights I'd see myself in Foyles, looking through the ballet section for a book that wasn't there. Wherever it might be, I always knew that it was my Swan Lake book.

Then, when I was 26, I decided that as it hadn't pitched up yet, I would write it myself.

That was in 1992. Since then I have rewritten it about 200 times: differences as small as changing the names or as large as reducing the length to half its original. The first draft was, in any case, hopeless: it was full of words.

Periodically I've shown it to people. Literary agents, publishers, friends, family. The typical reaction from the professionals? "Oh darling, we love it, it's beautiful, but it's very, er, whimsical..." They didn't fancy whimsical. Magical realism, which had flourished while I was a teenager gobbling up Angela Carter's books, had gone out of fashion. Meeting Odette, as it became called, at least for the moment, didn't fit anywhere.

Yet occasionally one of those friends or family members would pop up after reading another of my novels or attending one of our concerts and say: "What happened to the one about the swan? That was actually my favourite..."

Therefore I thought, after the splendid job that Unbound did with Ghost Variations, that I'd run it past them, just in case. Unbound likes quirky. Unbound likes whimsical. They love things that don't "fit" easily. And it didn't bother them one jot that Meeting Odette is somewhat different in genre from Ghost Variations - though it too has an association with an actual piece of music or, in this case, ballet.

It isn't a "ballet book", though, and it has nothing to do with Black Swan or any of the ballet's various stage updatings. It's a fairy-tale for the 21st century. The story of what happens when Odette is blown off course and crashes through Mary's window in a university town in the east of England has begun to feel oddly "relevant".

All the ducks - or swans - were in a row at last. And today, 21 June, Summer Solstice 2017, we launch the campaign for Meeting Odette. If you've enjoyed Ghost Variations, you'll probably know how Unbound works now. It's like an 18th-century subscription model. Essentially you are buying the book before it's published, rather than after, and you get thanked for it in print. It's now called crowdfunding, of course, but the inspiration is really quite archaic. (I should add, because people often denigrate self-publishing, that this is not self-publishing in any way, shape or form. Unbound has a different model, for sure, but they are top-flight professionals. I wouldn't have the first clue how to publish my own book and wouldn't like to attempt it.)

You can go for a variety of different reward packages at different levels. Prices start at £10 for the e-book and your name in the book. The paperback basic is £20, but there's an Early Swan deal for £15 on the first 50. A book club package includes five paperbacks and an author visit; a larger contribution gets you and your plus-one an invitation to a buffet lunch with me and some wonderful friends from inside the ballet world to enjoy food, drink and good conversation about books, music, ballet, Swan Lake and, no doubt, more. Ballet enthusiasts could also consider clubbing together for the biggest one, for which I'll come to your house or institution and give a lecture about Swan Lake itself (and you get 10 paperbacks too).

Later in the process I am hoping to add further rewards in collaboration with the Royal Opera House, where a new production of Swan Lake directed by Liam Scarlett is due for premiere in May. If you've already pledged, you can upgrade to one of these if you want to, once they become available. The site makes it nice and easy.

On Meeting Odette's page at Unbound, you'll find a video welcome from me, a synopsis, an extract and the full list of pledge rewards. Please swan over and have a look. I do hope that you will consider backing this book, which after 25 years is very, very close to my heart.