The other violinist of Ghost Variations!

Hello, dear Ghost Variations supporters! I'm up to my eyeballs in the editing process at the moment, so please forgive the Shed silence these past weeks...but as the world has been very busy celebrating the centenary of Yehudi Menuhin this month (22 April) it seems a timely moment to take a closer look at the great violinist's role in our story.

Jelly's discovery of the Schumann Violin Concerto according to her "glass game" was only the beginning of a process that eventually morphed into a tremendous three-way race to the modern-day premiere. Involved in this were: Jelly herself; the Nazis' chosen soloist, Georg Kulenkampff; and a young superstar from America then emerging from child prodigydom into adulthood. This was, of course, the 21-year-old Menuhin.

The publishers, Schott's of Mainz, sent him a photostat of the Schumann concerto when it was going into production, ostensibly to seek his opinion on the work's quality. Menuhin fell in love with it and, naturally, wished to play it himself. He wanted to be the one to give the first performance. And he wanted it to be his comeback piece after a sabbatical he had taken that lasted about 18 months. 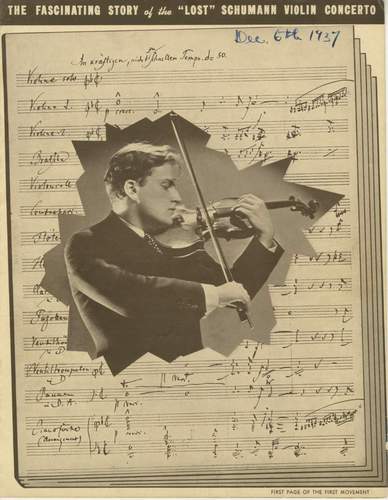 Sending Menuhin the concerto seems to have been an act of fairly extraordinary brinksmanship on the part of Schott's. This was 1937. Germany was rearming; it had reintroduced conscription; Hitler was building towards the invasions that would before long spark the Second World War. The Nuremberg race laws had come into force, books had been burned and artistic organisations, among many others, had been forced to dismiss their Jewish employees. Jewish composers had been blacklisted and Mendelssohn, whose works were some of his country's most popular, was no longer to be heard in the concert halls. In this environment, knowing already that the world premiere of the Schumann was to be stage-managed by the Ministry of Propaganda, Schott's still sent the concerto across the Atlantic to a violinist whose name, 'Yehudi', identified him unmistakeably as Jewish. It was a huge risk for them. So why did they do it?

Several possible motivations existed. First of all, no doubt, financial. Were Menuhin to take up the work and tour with it, it would travel the globe with him and receive the highest-profile attention internationally. This would benefit the company as it was responsible for producing and hiring out the orchestral parts. Other violinists would be alerted to the work's existence and thus Menuhin's publicity would help to spark further performances by more musicians. Attaching the work to a brilliant young superstar who only had to play an open string for it to be noted in the press would help to attract attention in no uncertain terms.

Probably the company's experienced directors, the brothers Willy and Ludwig Strecker, could see the writing on their country's wall. Their actions suggested that they had little faith in the Nazi regime. Even as they published its leading composers - such as Richard Strauss, Carl Orff, Hans Pfitzner - to the point that some considered this virtually the unofficial state music publisher, they were hedging their bets and looking well beyond the current situation. They had both lived through the First World War - Ludwig experiencing the trenches, Willy interned in London, in Alexandra Palace. They knew that things don't last. They knew, one suspects, that in due course everything would change again. This was the same firm, incidentally, that published the works of Erich Wolfgang Korngold; when Korngold and his family had managed to escape to Hollywood and his house in Vienna was taken over by Nazi forces, it was an employee of Schott who managed to break into the basement, while the soldiers were drinking upstairs, to smuggle out as many of Korngold's manuscripts as he could. These were then shipped to Hollywood hidden in a consignment of printed music.

What about Jelly d'Arányi? It was she, after all, who had tipped off the directors of Schott about the Schumann's existence. Menuhin appears to have been entirely innocent of her involvement, though I am reliably informed that his father was not.

Deeply sheltered and overprotected, the young violinist was featured in LIFE magazine, 20 September 1937, a close-up of his hands in full violin flight appearing on the front cover. He had spent 18 months in "retirement" at the family home in the Santa Cruz mountains 60 miles south of San Francisco. "At St Louis, in November, his fabulous fingers (shown on front cover) will make musical history by playing, for the first time with orchestra in America, the newly-released Schumann Violin Concerto..."

On the next page, there appears a photo of the manuscript score of the third movement. LIFE says: "Schumann composed it in 1853, the year before he went mad. He sent it to the great Joachim who never performed it, stipulating in his will that it was not to be played until 100 years after Schumann's death. That would be 1956. But this spring, Yehudi saw a copy of the score, begged to play it so hard that it was released for performance."

Menuhin's planet was waxing; Jelly's waning. Menuhin was young; Jelly slipping into middle age. Menuhin had had no spirit messages to report. Had Jelly been the youthful rising star and Yehudi the older artist whose glory days were behind him, things might have been different. The decision to send the concerto to Menuhin was, I'm certain, commercially pragmatic rather than malicious. The publishers fought Jelly's corner, battling down Kulenkampff's exclusivity request, arguing that she should have the moral right to give the UK premiere at the very least. But see it from their point of view: they had to consider to their own interests first.

Yet to be Jelly d'Arányi at this point must have been a painful experience indeed. The best is the enemy of the good; and it's clear that now it was Menuhin's turn to be the best.

You can listen to Menuhin's performance of the Schumann Violin Concerto here:
https://www.youtube.com/watch?v=yynDafgjjB8

I am deeply grateful to Schott's in Mainz for a fascinating chat about the Schumann Concerto when I began exploring the project that has now turned into Ghost Variations, and for an article with which they supplied me that helps to fill in certain details of their involvement in the negotiations. My profound thanks, too, to Yehudi Menuhin's daughter, Zamira Menuhin Benthall, for her very kind and generous support for this book.