George Canning Is My Son

A new biography of the remarkable Mary Ann Hunn.

Work on GEORGE CANNING IS MY SON may have been held up by the pandemic but progress is being made and the book is due to appear in March next year.  I have just sent the text back to the editor with my latest lot of corrections -- mainly small changes to the wording (deleting adverbs, removing repetition) but also dealing with one or two factual errors.

The designers at Unbound have been at work on the cover -- see below. It features a detail from the portrait of Mary Ann that belongs to the West Yorkshire Archive Service.  The reproduction is digitally enhanced as the original is cracked and darkened with age. I've not found any record of when or by whom it was painted, and it's hard to guess the age of the face. Typically Mary Ann has a pen in her hand, since like the heroine of her novel she had "a love of the goose-quill". The other hand, not included in this detail, is holding her eye-glasses.

Choosing the so-called shout line for the cover, "A mother's struggle to regain her son's love", was not easy. Some people will object (I think I might object myself) that it places too much emphasis on Mary Ann as the mother of glamorous George and ignores her other claims on our attention. We would rather think of her as a strong independent woman carving out a life for herself.

The same criticism can be raised about the title. It is taken from a letter that Mary Ann wrote to a friend in 1814, when she was 67: "When I run up the account of a most eventful life, I find the balance of good predominate, for George Canning is my son." We tend to think that in old age we can look back on our past and, as Mary Ann puts it, "run up the account", and form a calm, mature assessment of our life. One of the things I question in the book is this reliance on the privileged judgements of old age. How qualified are we, in our old age, to understand the passions and struggles of our younger selves?

The book highlights the passions and struggles of the younger Mary Ann as she makes her way in a hostile world, and (I hope) does full justice to her as a strong and independent woman. But in constructing this picture of Mary Ann we can't forget that, for her, at every point in her life, of all the terrible things that happened to her the worst was the separation from her eldest son. 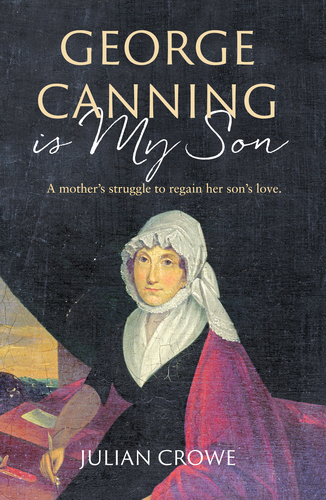 I am so excited and intrigued for this book to come out as I am related to George Canning (his grandfather is my 6th great uncle)!

Hello Kiera. Thanks for the comment. May I ask which of George Canning's grandfathers, Stratford Canning or Melchior Guy-Dickens, is your 6th great-uncle?
Julian Crowe

Hi Julian! My 6th great-uncle is Stratford Canning; his sister Abigail is my 6th great-grandmother and she married Hugh Doherty. Their grandson was John Doherty, Lord Chief Justice of Ireland (my 4th great-grandfather).
Kiera G

Thanks for the reply, Kiera. I suppose your 4th great-grandfather, the judge, was the brother of the unfortunate Hugh Doherty, author of "The Discovery", who makes a couple of very brief appearances in my book.