A Glimpse of Chapter 7: Van Morrison

1976. Steve and Ian wake with a start. It's the rain, drumming onto the top of their van, as if a huge Ogre right out of a D&D game was using their roof as a drum-kit (Drums of Thunder, +6). It was another day working in their Uxbridge Road office. And yes, that's right, they lived in a van. Van Morrison, as they called it, where they'd been sleeping for a while now, alongside all the boxes of games and Dungeons and Dragons and stock they couldn't fit into their office. How did it end up like this? Well, a few months earlier, Ian and Steve had been running Games Workshop out of their flat at 15 Bolingbroke Road in Shepherd’s Bush, West London. The converted town house had only one public phone in the hallway that they were using for their mail-order business.

But now they'd got a whole range of entirely new kinds of games. Things were beginning to pick up and it wasn't just Mancala boards and backgammon sets anymore. They'd managed to acquire a 3-year exclusive distribution agreement for the whole of Europe from Tactical Studies Rules (TSR – publishers of Dungeons & Dragons in the US). This was granted when Games Workshop made their first order; for six copies of D&D. They were already publishing their own '70s-style newsletter called Owl and Weasel, a kind of predecessor to White Dwarf, which they quickly adapted to be the mouthpiece of their new product line.

Now the phone was constantly ringing, and gamers often knocked at the door. (Some would call them '70s nerds, but not all of them were, of course. Not to mention that the word nerd wasn't yet in common parlance, but this is where part of the whole 'nerd' thing was born). A recent article in The Spectator magazine called Ian and Steve, ‘Patient Zero for the epidemic of UK geek culture’. Their customers were expecting to find some kind of shop front so they could buy direct. Even the occasional costumed wizard turned up... The landlord was getting increasingly annoyed with people and parcels arriving all day long, let alone the other residents who hadn't banked on living with this kind of entrepreneurial explosion.

They had to get out... Gen Con IX was coming up in the States, the premiere convention for fantasy and science fiction gaming in the world. They had to get there, meet Gary Gygax and the rest of the D&D guys, firm up that vital relationship. To try to sign up all the fledgling US role-playing games companies. It took about 3 months to get to Lake Geneva, Wisconsin for the Con, but they got there in the end. Deals were struck, games were played, beer and burgers consumed, relationships established.

They flew back, inspired and invigorated by it all – except now they needed a new office. They managed to find one in Uxbridge Road, also in the Shepherd's Bush area of London. It was a small room at the back of an estate agent. That's all they could afford and it didn't include an actual flat to live in... So, that's where Van Morrison came in. They slept in the back of Steve’s van! And what about washing and shaving and the rest? Well, they joined a nearby squash club. For several months they lived in the back of a van, ran their business from a tiny room round the back of an estate agents, and became very good at squash by default.

The Uxbridge Road Games Workshop was a small space in which Ian, Steve and their first ever employee, Trevor Graver, worked. Stock was stacked up to the ceiling, and there was barely enough room to move around. Rent was £10 a week. In today's money, that's about £60 a week. In terms of inflation, that is. Not in terms of rental prices, of course, but still. When the inevitable customers (including the costumed wizard, who was by now a regular) came to the actual office, expecting a shop, either Ian, Steve or Trevor had to leave the room, as there wasn't enough space for the customer to browse their stock whilst they were also there.

When an order had to be packaged up for posting, they'd have to go out the back of the office to the bins area, half sheltered against the elements, and collate the order there.

The business began to grow very fast. Space became a problem but so did the estate agency. They were truly fed up with gamers turning up out of the blue, the bins area getting taken over and the constantly ringing phone. Now Ian and Steve could afford a bigger office – so they asked the estate agency to find a shop for them. As that's what estate agents do, they were more than happy to oblige – and they found them one at 1 Dalling Road, Hammersmith. That's how the first ever Games Workshop retail store came to be! A nice, proper shop with an office room on the first floor. They could even make tea and snacks. There was room for their stock and more employees. It was spacious and felt almost luxurious compared to the tiny office. 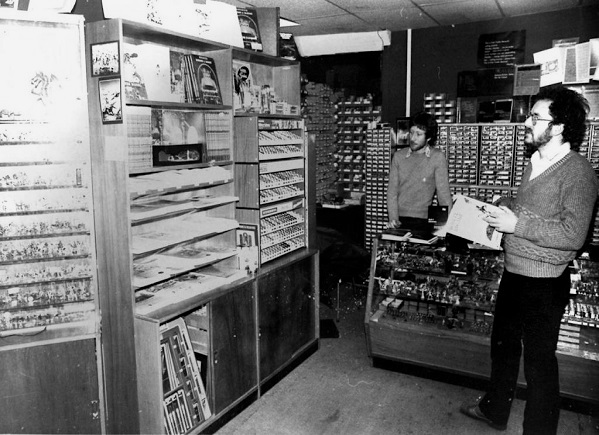 Games Workshop, 1 Dalling Road. And what happened next?