First of all I would like to thank family, friends and Sharpe fans for allowing me to realise the long held desire to put my Sharpe experiences into book form. And thank you to Unbound for letting me write the book I want to write. Some might say how could the ramblings of a spoilt, entitled actor be of any interest to an audience beyond the world wide legions of fans? If tales of mishaps, danger and catastrophe while filming one of Britain’s best loved television shows in foreign locations isn’t enough. Perhaps the story of a group of Westerners thrust into a formally ‘forbidden’ land at momentous time for that country in a pivotal period of world history, will interest a wider demographic.

Life in the disintegrated former Soviet Union for a lad from London proved to be enough of an eye-opening experience; couple that with the ‘glamour’ of film making, the explosion and confirmation of stereotypes and Western boy meets girl from the East, you’ve got a story that should appeal to a wider demographic. Though the majority of my five seasons on Sharpe were spent in the Crimea, Southern Ukraine, the memoir covers our further, equally tumultuous adventures in Turkey, Portugal and England as we pursued television legend. Transcribing my written diary for this book dredged up many dormant memories of some painful times endured by our maverick crew. And how we found friendship and many heart-warming moments with our new Ukrainian colleagues all recounted to you with witty irreverence. At the time of this update the fund stands at 86% and my first draft is about 90% done. But remember, the book will only be published when the fund hits 100%, so please tell your Sharpe fan friends and share the link over the hills  and far away. Once again, thank you to all supporters of the book for allowing me bring the amazing story of life on Sharpe to a wider audience; here’s a little passage to show you what to expect:

"On the 15th of December 1992 we moved our base to the Lisbon Hilton for the remaining two weeks of the shooting schedule.  Our arrival in the Portuguese capital coincides with Bernard Cornwell’s first visit to set which as a newly minted fan of the novels and the son of an author I was eagerly anticipating.  Our first meeting with El Maestro was at a unit dinner at a restaurant in the famed Alfama district of Lisbon that specialised in Fado, the national music of Portugal usually hauntingly performed on an acoustic guitar. All the heads of the departments were present along with many of the cast and crew, some with their partners. A great night was had by all as we took in the heavy strumming of the unique looking guitar, aided by liberal lashings of the local plonk, Vino Tinto. Late into the night we’d had enough.  The bill was requested as the party gathered their things; the bill which took an inordinate amount of time to sort out still hadn’t arrived by the time we were ready to leave. Not that surprising due to the size of our party, plus the management of the service was haphazard and inefficient. But we were in a good mood, still warm on Vino Tinto. Then the bill finally arrived, we understood quite quickly the manager had  seriously over egged it; that or we were too drunk to know how much we’d actually consumed. However we did have some sober heads in the group, as well as some Portuguese speakers who after negotiation realised the manager was trying to pull a fast one on a bunch of English gringos. We outright refused to pay the inflated bill; instead dumping a pile of Escudos down on a table, more than sufficient in our minds and motioned for our party to exit.

The restaurant was down in a cellar with the exit door at the top of a steep staircase which we could see was being locked by a small, scared looking waiter. This action was like a red rag to a bull. Well-oiled on the vino and well stuffed with pent up anger after numerous rows with my girlfriend, I vaulted up the stairs wrenching the waiter aside and unbolting the door. I defiantly yanked the door open to find a more fearsome, ugly looking Lisbonite, standing in the street waiting for us, armed with a small knife. Before I could raise even an eyebrow let alone shout “Chosen Men to me”, I felt a massive shove on my back forcing me to the pavement in quick fashion, leaving me in the gutter staring at the moon over Lisbon. In second it was all over our whole party was in the street unharmed, with the chap who was sent to stop us firmly despatched. It turns out that Sean, who wasn’t adverse to a little agro from time to time, in his haste to smash the bloke’s face in, had shoved his learned Chosen Man out of the way in order to have a clear run at the enemy. Maybe Sean was just protecting me, either way the sight of Sean Bean charging at you with intent made the guy run a mile.

At incident’s end I dusted myself off and noticed Bernard Cornwell was grinning ear to ear at witnessing life imitating his art. Sharpe and his Chosen man Harris displaying the ‘take charge nature’ that was expected of a 95th rifleman. Only later when recounting the story did it dawn on me the dangerousness of the incident, how it could have possibly led to harm or a night in the cells, with the resulting delay to the last days of filming. But we were fearless, stuffed full of hubris and weren’t going to let anything stand in our way. I mean we had just gone three months in newly disintegrated Soviet Ukraine in conditions that could make a grown man cry, so a cheating restaurant manager and two short-ish chaps, no matter how ugly, weren’t going to defeat us. Despite this being an adrenaline filled, exhilarating episode of our off set adventures I began to wonder; how much more fighting would be required on this first series? How many more hairy incidents with potentially harmful outcomes would we have to be endured on Sharpe?" Jason 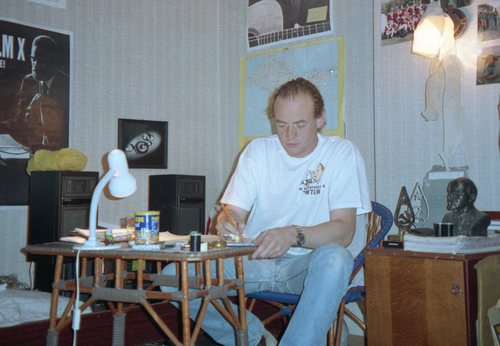 Looking forward to the finished book, Jason, but I hope you will employ a good proof reader. This extract is full of errors! Bernard Cromwell, for just one example. If you are stuck, I'll happily volunteer. Best wishes, Carolyn.

Hello Jason,
As a fan of the series (I have to watch it regularly or I feel the lack), a devotion to the cast members (I'm also in the business) and a passion for history, I can't wait to read your book. I have a lot of forebears who were in the Rifle Brigade so those years are of particular interest.
Break a leg for the final stretch!
Sarah

Can't wait to read the book! As an independent author myself, I agree with Carolyn (above) about making sure you have it proof-read - happy to help out as well, if needed. :-)

Actually, Carolyn, I have just looked at the Unbound site about how the book will be crowdfunded, and it appears that the publishers do cover editing & proof-reading prior to publication. Guessing the reason the pitch text wasn't corrected is that this only kicks in if the project is funded. :-)

I am so happy this book will be available soon! I have loved your work, and especially the Sharpe series for many, many years. I am actually surprised that this project doesn't have way more supporters by now. I LOVE you for putting the time and love into giving us all these amazing behind-the-scenes stories. Much love from Texas! Cheers!

Limited edition hardback copy and a copy of the ebook.
Buy now
£10
72 pledges