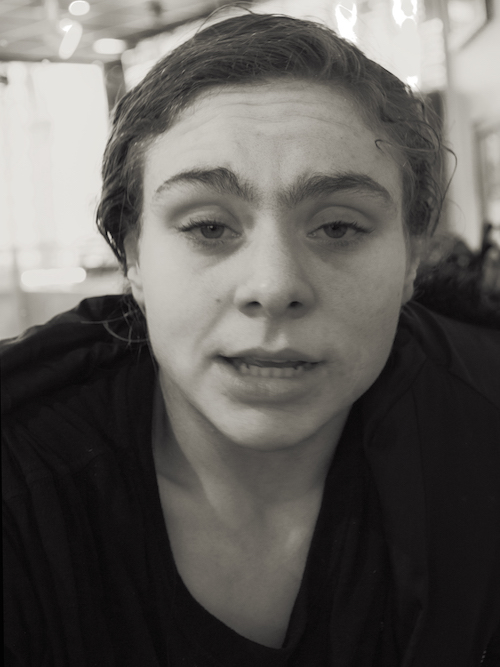 I do go through the bins, I do pick up pizza off the floor … all that … it makes me feel horrible. I look around, like, ‘Is anyone watching me?’”

Over the weeks I regularly ran into Jade, and she became important to me for the short time we had together. I developed great affection for this girl. An archaeologist could have taken a soft brush and gently dusted away the grime, the dirt and the pain to reveal the radiant young woman that lay beneath it all.

Some evenings and nights, if I was just out with the camera and tripod - searching for pictures and not people - I would look for her and we’d sit together, usually outside Leicester Square tube station. It meant I could rest my legs and enjoy her company for an hour or so. She was engaging - a fighter, small, tough, scarred inside and out and so brave.  Her courage was only fractionally greater than the violence she lived with.

On our first meeting, she wanted doughnuts to eat. Homeless people seem to have a sweet tooth. She ate with the unabashed gusto that small children have, and her words came fast and furious, mingled with little puffs of icing sugar.

Jade had been homeless for most of the last eight years - a lifetime when you are only 23 years old. Before I turned on the recorder, I was asking general questions about her childhood and that was when I first heard her say she was ‘daddy’s little princess’.  She said it with her huge smile.

Had I left it at that - walked away then - I would have thought what a shame things ended so badly for her, but at least she’d had a loving father.  And that would have been a huge, huge mistake.

JADE - extracts from her story, in her own words:

“I was raised by my nan and grandad because my mum was really young and was in a violent relationship with another man.  I loved my nan and grandad.  They raised me brilliant - basically, bed at seven and I had to do my homework. I was allowed contact with my real dad but he was always in and out of jail - theft, petrol robbing and criminal offences like that.

Yeah, when I was young, I was ‘daddy’s little girl’ - he used to take me shopping and spoil me because when he used to commit crime it paid good money. He worked as a postman and was robbing all the people’s Visas and cards. No-one stopped me seeing him ‘cos I never used to tell them nothing about what he did.

He’s never abused me. Never. Never touched me. But the way my dad sees it, if we do smoke, drink or do drugs, he’d rather us do it in front of his face than behind his back.  In case any of us died, or anything, he’d be there to phone the ambulance.

Watching my dad’s lifestyle, that’s how I fell into that lifestyle, from a very young age.  I smoked my first cigarette at eight with my dad and I started hanging around with all the estate ‘losers’ … I was 13, 14, 15 - smoking, drinking.  Back at the age of ten, I found my dad using ‘crack’ and I kept thinking, ‘What’s he doing?’  We was in, like, a B&B, one room - that was all the council gave us - I didn’t know he was using ‘crack’. [long silence].  My dad gave me my first ‘crack’ pipe at the age of ten.  In my eyes I thought it was a good thing because it brought us that bit closer. I’ve had my dad in the next room when I’m doing prostitution and he’s going out and getting customers and then bringing them back.  He had a £300-a-day habit

Six years ago, I lost my grandad - just before Christmas - that ripped me apart.  Even to this day I can’t get over it … put myself on a life-support machine by injecting heroin ... put myself in a coma.  They told my mum I wasn’t going to see Boxing Day.  I just wanted to be with my grandad .

I know I’m going to die soon. I’ve got two blocked arteries, a damaged heart valve - all through heroin - it clotted all around my heart when I was injecting in my groin.

I’ve been pretty well homeless for eight years, since I was fifteen.  On and off, but my longest time now is the last two years. This will be my second Christmas straight on the street.

But even though I’ve gone through this episode of going downhill, I will succeed and I’m going to push myself. I’m going to work with disabled children. Or the elderly. Because my sister, she’s disabled. And also because everyone slates disabled people, but do you know what? They are fantastic, amazing proper people.  I’d never put disabled people down, ever.

Truthfully, the last seven or eight years I’ve just had to try and survive.  I’ve been emotional.  It’s just horrible outside … everyone just walks past you. I’ve cried through the night, some nights … and there’s people coming out of the pub and wee’ing all over us - it’s drinkers coming to the pub, coming clubbing - they get drunk and think, ‘Oh, let’s do this little, silly thing’. I get wee’d on, so then I have to throw my blanket away - and when you lose a blanket ... I breakdown.  Emotionally.  I just start crying.  And the worst thing is, when that’s happened, it’s always the next day when you’re hungry and you’ve got no blanket and everyone still walks past you.  Not caring.

For money, I sleep with dealers and then they give you the ten-shot [a £10 syringe of heroin].  Some of them will smoke all night with you and look after you and not want sex, but prostitution - it’s the only way to cope for money out here - for the simple fact that when we beg on the street, which I find so, so hard ‘cos everyone walks past, looks down at you - and not one of them has taken the time and said, “All right?  How are you?”  A little hello would be fine, it makes you feel stronger.  That’s what I recommend to people - if you don’t want to talk to the homeless, at least say ‘Hello’ and smile because that will make them feel a little bit stronger.

The drugs block it all out. The thing is, when you’re doing prostitution, there’s no feeling, no thought - you just lie there. I don’t sleep at night.  Because with everything that’s happened to me, I’m petrified.  I will not lie there at night, asleep. I try and sleep in the day.

Jade mentioned that she had once owned one of those ‘adult colouring books’- full of complex and beautiful drawings that you colour in - that help people to relax.  I offered to take her shopping for one ...

Fantastic! … they kept me off drink before … got me off heroin before … and I miss it now, I’d love a colouring book again … yeah, straight up - one of them ones with the patterns! They like, keep me from getting emotional, keep me from stressing - I can just sit there and colour … I don’t even care if anyone gives me money!