Four Chancellors and a Funeral

The sequel nobody wants. After a decade of the Tories, could it get any worse? Spoiler - it does. 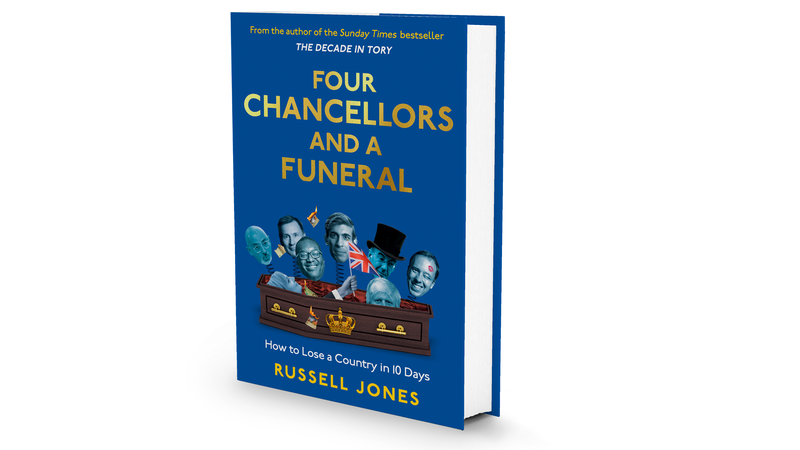 A signed first edition of Four Chancellors AND a hardback copy of Russell Jones's bestselling debut, The Decade in Tory.

The perfect centerpiece for your next tea party. 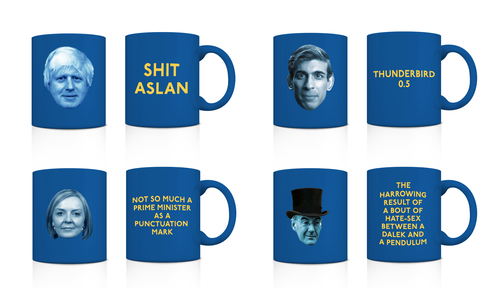 Read with a friend or send to your Tory MP

Buy a spare copy for a friend - or to send to your local Tory MP. 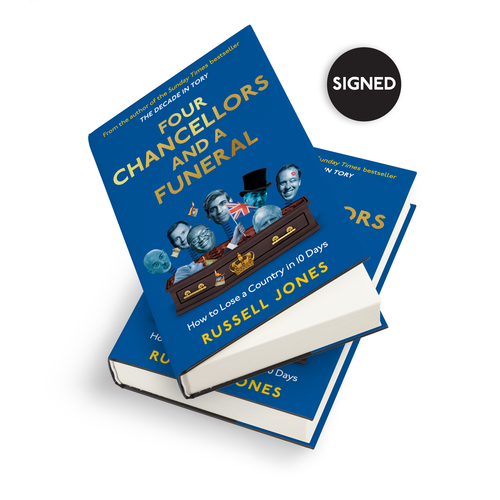 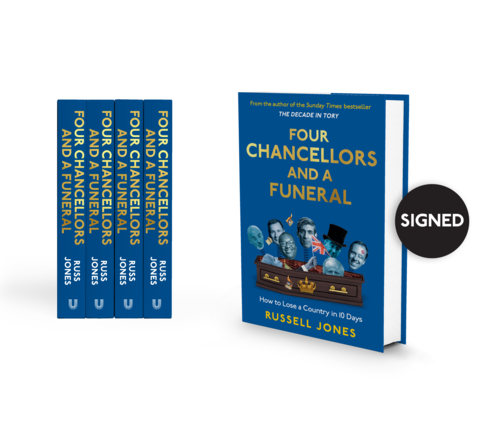 Be one of the book's biggest supporters and have your name printed in a special list at the front of the book.
LIMITED TO 5.

A darkly comical history of the Tory government from January 2021 to the end of 2022, Four Chancellors and a Funeral is the sequel to the Sunday Times Bestselling The Decade In Tory.

The story so far.

The Conservatives had been in office for a decade. First there was a coalition to avoid chaos, which it did by delivering five chaotic years of ever-increasing homelessness, inequality, omnishambolic budgets, donor ennoblement, and prime-ministerial pig-fucking.

Then they decided to hold a referendum on who had the best fantasy, with the promise that the winning pipedream would become a new, and very, very angry, national religion.

After lightly-glazed polyp David Cameron ran away to hide in a preposterous squillionare's woodshed, we were left under the care of a robotic ghoul called Theresa May. Not a lot happened under her leadership, just the loss of 60 ministers, record-breaking parliamentary defeats, the stage collapsing while she croaked passages from The West Wing to conference, and an unforeseen outbreak of dangerously unusual dancing.

We replaced her with a thermonuclear tribunal magnet who brushed his hair with a toffee-apple, and handed billions to his mates so they could ineptly fight a pandemic while he stayed at home, shagging and acting as a super-spreader. He crashed our international reputation, buggered our constitution, and gave us the worst economy and health outcome in Europe, but somehow hung on to his job until that age-old combination of corruption, ineptitude, sexual debauchery and ABBA finished him.

And then we had a drive-by prime minister who killed off the queen and crashed the economy in the same week.

So: Truss got trussed up, Johnson got in trouble with his Johnson, Pincher got in trouble for pinching, Fabricant fabricated, and James Cleverly … well, he remained the exception to the rule.

And now we’re led by Rishi Sunak, who doesn’t know how to use a credit card, drives a pretend car, and seemingly had a hair transplant from a Lego Elvis. He exudes the desperate energy of Alan Sugar’s 6th most-impressive apprentice, and his grinning promises of even more poverty leave us asking: what could possibly go wrong next?

Four Chancellors and a Funeral delivers more of Russell Jones’s signature scathing wit, combining a detailed historical record with acerbic commentary, all of it leavened by jokes at the seemingly endless maelstrom of failures, nincompoops and hypocrisies.

A signed first edition of Four Chancellors AND a hardback copy of Russell Jones's bestselling debut, The Decade in Tory.