Fantasy Telly in a League of its Own 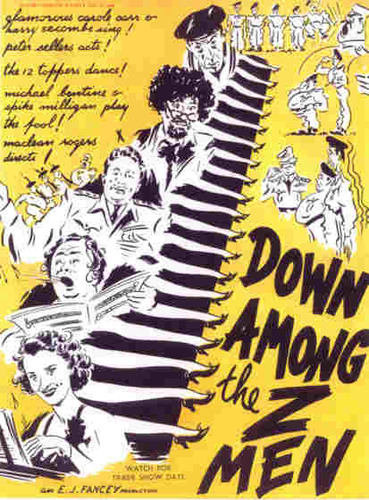 My passion for television has been a lifelong one. Literally my earliest memories, of any kind, are Tom Baker & Lis Sladen taking on those pesky Cybermen, and the Goodies ~ probably doing something outrageous and hilarious with a black pudding. Way back in those foggy, now somewhat murky, seventies I also remember entering a telly competition. It was probably on 'Swap Shop' or something, but the basis idea was to plan your perfect week of viewing, and publish your schedule in a faux 'Radio Times'. I was around seven or eight years old at the time, and my dream timetable was pretty much wall~to~wall Carry On films and Disney cartoons. However, comedy heroes like Dick Emery, the Two Ronnies, and Monty Python, had a place in both my heart and my listings even then.

Now, with the launch of Talking Pictures TV on Tuesday the 26th May, the idea of a fantasy television station has become a reality. I mean, even I had the grace to observe close~down. These wonderful people are at it 24 hours a day, seven days a week! The extraordinary output ranges from westerns from American television, to compilations of classic silent movies, but at the heart of the collection is a wealth of British films plucked from the vaults of Pinewood, Shepperton, and Twickenham Studios. And there are more than a few Forgotten Heroes of Comedy included. Renown Pictures Ltd., the company behind Talking Pictures TV, has long been a supporter of the book. In turn, I was delighted to give a talk about some of my favourite forgotten heroes at their inaugural Festival of Film in Rickmansworth this past February. It was beautifully organised and richly entertaining. The television channel promises to be cut from the exact same cloth.

You'll be able to relish big screen performances of such 'Forgotten Heroes of Comedy' favourites as Freddie Frinton in 'What A Whopper!', Michael Bentine (alongside those three other fledgling Goons) in 'Down Among the Z Men', and director Duncan Wood's rare excursion into cinema with 'Cuckoo Patrol', starring Kenneth Connor and Freddie & the Dreamers no less! So, while you are wallowing in the fantastic nostalgia of Talking Pictures Television on channel number 343, don't forgot to pledge, re-pledge, and spread the word on 'Forgotten Heroes of Comedy'. Talking Pictures Television (www.talkingpicturestv.co.uk) is the place where some of them live again. Any time of the day or night!

Fantastic! A nostalgic thanks to you (VERY) much :) Robert

My satellite reception of this channel wasn't the best, but happily, TalkingPictures TV is now on Freeview (at least in London).

Of particular interest lately has been "Tell Me Another", where pretty much any light ent. figure who was anybody gets to share their anecdotes, with the interviews then reedited to form a diverse programme in the style of Stewart Lee's Alternative Comedy Experience.

The gold from the Southern TV archive keeps coming!