A Feast of Folklore

From witch cake to wassailing, strange stories of Britain's food.

Looking through old books of folklore I found a few references to witch cakes. If you do a quick search online your likely to find cakes covered in lurid green icing and a little woman in a pointed hat. But the witch cakes made in the past were just a bit different - and probably not ones you'd want to eat.

One of the first mentions of witch cakes comes from the Salem witch trials. When the young girls of Salem began behaving strangely the obvious cause was the curse of a witch. Luckily one of the villagers had a quick way to identify who the malefactor was. She ordered a witch cake to be made.

This witch cake was a simple one made of dough with one unorthodox ingredient. For the witch cake to work it had to contain some urine taken from the bewitched victims. Once this urinal cake was made it was fed to a dog. The witch was then supposed to reveal themself, but nothing happened.

In British folklore witch cakes were not meant to actively find witches but rather to stop them entering your home. In houses across the country folklorists of the 19th century reported witch cakes could be found hanging behind doors. These cakes were made with a hole in the middle and spikes radiating outwards, before being baked rock-hard. The cakes were made each year in early April and were meant to be hung for an entire year.

I decided it was time to make my own. To make sure my witch cake lasts a whole year I made the dough with a huge amount of salt. I think it turned out rather well. And so far as I know no witches have made it into our flat. 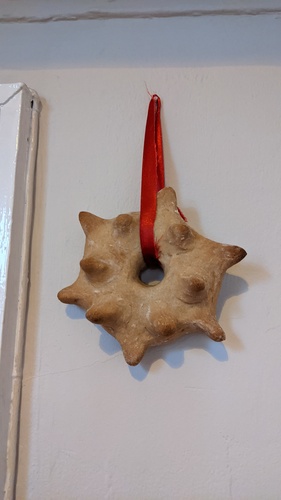 Thanks so much to everyone who has supported my book so far. If you want a witch cake of your own you can choose to support A Feast of Folklore at that pledge level. Please tell all your friends about the book so we can get this book into your hands all the sooner.

First edition hardback, your name in the book and the ebook.

Your name printed at the front of the book as a Patron. Plus two signed frst edition hardbacks, the A3 print, tote bag, mug, handwritten recipe postcard and the ebook.