First in the World Somewhere

Looking for Agents, Petunias and Heavy in the edits 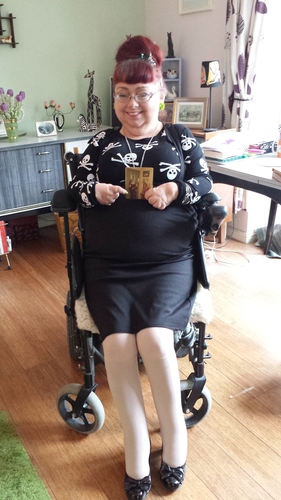 I admit I'm cheating but crave your understanding. The Pen energy stretches so far and the stubborn unhealing shoulder does not help. Which is to say that I'm sharing my newletter with you below to update you on news and goings on.

I wonder how many of you saw my 11 seconds on The Final (Brexit) Debate on Channel 4, before Paxman did the Hand and moved on to Heseltine? Hmm. See more below...

The intervening months, since the last newsletter, have been filled with a mixture of journalism, media appearances and a festival. There’s been quite a few challenges with health and stuff that I (and many others) shouldn’t have to fight for.  The broken shoulder remains broken and circumnavigating an NHS weakened by the government makes finding support increasingly complicated.

Still, I have been busy. After the outcry over the dull rom com Me Before You a flurry of work ensued. The Guardian wanted a comment piece. The whole debacle with this film erupted a protest took place at the premiere, supported by online activists including myself. Going viral quickly, anger centred around the issue of the very wealthy hero deciding his life wasn’t worth living. An example of shocking clichéd representation, which I’m glad to say thousands upon thousands recognised. After The Guardian piece, came something for Digital Spy, a podcast for Disability Now and BBC Ouch and a ridiculously early appearance on BBC Radio 4’s Today programme.

Next thing I know, I’m writing for The Guardian about disability sexuality (who ya gonna call? P Pepper!)  – on the back of Me Before You – the night after my Daisyfest performance and exclusive first reading from my memoir.

One way or another, all this activity led me to be an invited guest on the Channel 4 Final Debate on the 22nd June about the EU Referendum. Chaired by Jeremy Paxman, who was his usual bullish self, I feature for 11 seconds very near the end.

There were many complaints, and my own comes from being promised that the format would be accessible. Which it very much wasn’t. While I would never presume to say I can speak for all disabled people, I was very aware of the expectation that I would at least bring a voice from own concerns regarding Leave or Remain, which I’d also had the opportunity to write about for The Guardian the day before. Like many, I remain shocked to my core that the Leave EU campaign won. Shocked too at how divided we are and at the economic and political fallout.

I chug along with work, some paid, some not. Most recently, a performance for Sisters of Frida (in my favourite tiara) and regular work for the Guardian. And OF COURSE, First in the World Somewhere, responding to the editorial notes that came through. Nothing too scary in the rewrites and a proposed publication date of autumn 2017.

The book is still availableto pre-order on Unbound, do share this post. You can still choose from various extras when you buy the book, such as the memoir playlist – which I guarantee has many surprises. Every purchase made goes towards keeping my gluten-free bread on the table – and obviously means I can carry on writing.

As for other work and writing, I’m going for a bold approach with you, asking for your help in firstly, introductions to literary agents / talent management and secondly, paid work as a speaker, panellist, presenter, workshop facilitator, performer.

This what I do and I’ve done it for a long time now - it feels a shame when I’m underused after a long and experienced journey! In terms of a literary agent, a personal intro is always best. I’ve had a few “almosts”, but it’s best to keep all options open. My mentors feel I need talent management as my work goes beyond literature. Even if you have a vague contact to someone who is nice and would have a conversation, I’d really appreciate an email or an intro.

And here’s the emotional blackmail bit: I’ll never be as healthy and strong as I once was, but I don’t want to fail at what I do well. The system, especially under austerity, doesn’t support someone like me to thrive at what I do best.

Okay – enough of that.  Always appreciated

Until the next time,

ps: photo is of me on day of filming for BBCs The People's History of Pop, to be broadcast in September.

Didn't see any of the TV as I don't have a telly. WIll look up the Guardian articles, as I live in France. I'm looking forward to your book. What happened with the shoulder? Re. the NHS; I used to work in it and feel that it has gone downhill badly since all the public/private joint enterprise stuff. I blame first Blair, then the Tories. Rant, Rant.