A remarkable record of what it's like to be in a landscape, from a contributor to Caught By The River. A book of visions; both visual and verbal.

Field Notes is going pretty well I reckon. Over five and a half grand raised so far with 207 very wise backers to thank - Awesome work so far. It's a huge production budget to meet, largely due to printing costs - Field Notes will be full colour throughout ( all the colours ! ) and that's where a huge chunk of the money goes ... blimey.

Like I said, these are hectic days. I've recently taken on another job ( besides drawing and that ) , working nights with gentlemen who require special support. It's good, but draining. However, the wee small hours offer much thinking and plotting time - my notebooks are full of Field Notes related plans - how to proceed in wrangling the hundreds of drawings and manifest Field Notes into something more than a handsome coffee table book...

One of the aspects I keep returning to is how, at the end of all this, Field Notes will fit into the market... as I've said to folks before, it's not a nature writing book and I'm not botantist or natural historian and while I've enjoyed reading the likes of Macfarlane etc, I don't think Field Notes is one of those books ... the plan, such as it is, is for the text to push into a different territory - what I have so far is quite heady, more like narration to a peculiar film one might chance across in the dead of night, perhaps something recorded off telly in 1991 with an enthusiastic introduction by Alex Cox .... like Stalker but lurking around Donna Nook, waiting for attack helicopters at the gates of dawn .....

It's a tricky beast to muster. It is brewing into something unexpected.

Meanwhile, yesterday I went hunting for flints ( found a skull ! ) and am off on a knapping course later today - I dare say both actions will appear in the book in one form or another

I'll have another update sooner rather than later, once the total creeps towards 50% - until then, don't forget to tell yer friends, family, enemies and pets to get with the programme and bung their support toward Field Notes.

Right - I'm off to break some rocks in the hot sun.

Thanks again for all yer support and patience 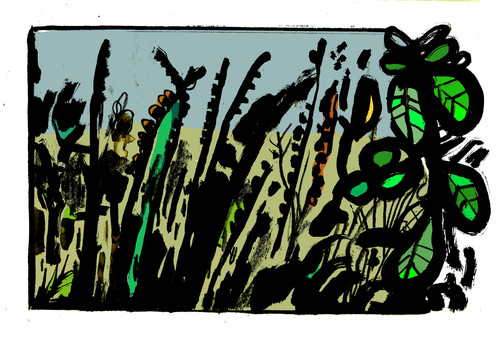 Hardback limited edition of the book plus an ebook.
Choose this reward
£25  + shipping
276 pledges

Hardback limited edition of the book, signed by Maxim, plus an ebook.
Choose this reward