The Afterlife's biggest rock festival is interrupted when headliner John Lennon vanishes; now promoter Felix Romsey has to get him back

Greetings everyone: hope you're all well and up to your eyeballs in chocolate/mince pies/mulled wine/insert-name-of-favourite-pre-Christmas-indulgence-here.

I haven't been in touch for a while, and unlike many I-haven't-been-in-touch-for-a-while messages I have a totally definitive and non-ambiguous excuse for it... I WAS ON TOUR. A bloody great long exhausting but actually quite brilliant European tour with Fink, in support of our bloody great Flood-produced sixth studio album Resurgam. At the risk of sounding like a prize plonker it would actually be quicker to tell you which European countries we didn't go to* than the ones we did. I had a madcap thought that somehow during this mammoth roadtrip I'd be able to finish the 2nd draft of Felix Romsey's Afterparty, but this was fanciful in the extreme.

But now I'm back... and on Friday night I finally emailed the brand-spanking new version of the novel to my wonderful Unbound editor (who funnily enough came to see Fink play in Zurich, so she knows I wasn't just gadding about). So we're back on track... Felix is one giant step closer to being a fat wad of bound paper in your hand.

Three things I must mention. One: you've no idea to what extent crowdfunding - i.e. knowing 161 people have already invested in the book - inspires you to make the book better. That's a completely unexpected by-product of the process. So, once again, thank you. Two: travelling around Europe, I met several people who've contributed to the crowdfunding. Hearing them say, "So - how's the book going?" really gave me a kick up the backside and helped speed me to my laptop the second I walked through my front door at the end of the tour.

Finally, three: a quick early shout out to the four people who've already read the manuscript. You know who you are. Your suggestions and obvervations on these early versions of the novel have been invaluable, even if, in some cases, I've completely ignored them. Criticism, epecially from friends, is great for cementing ideas in your head. And as I'm pratictically bald, I don't even need to worry about the cement ruining my hairstyle.

As usual - if you know anyone who'd like to contribute to the crowdfunding, there's still time to get your name in the back... so please follow THIS LINK...

Have an absolutely thumping Christmas and a walloping New Year - a year in which you will certainly be holding a copy of the book you have helped to bring to life, FELIX ROMSEY'S AFTERPARTY. Hurrah! 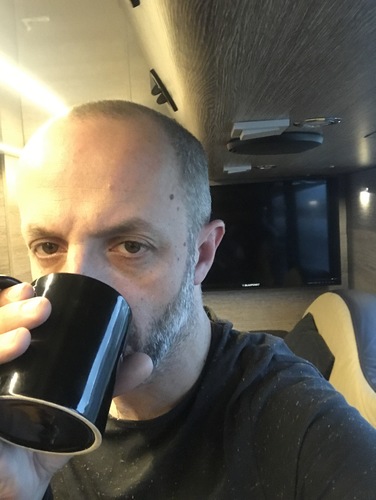 Me on the Fink tour bus not getting on with novel.