These are hard times. Hard to keep a focus on work when it seems that so much is threatened. So many people are suffering such huge loss. My friends who work in the NHS are struggling to keep heads above water. It's been almost a year now, of isolation. I really feel for musicians, whose lives are wrapped around performance. And meanwhile, in America.....

And I try to focus on the beautiful things people are capable of, creatively, and also in their struggle to support others through these times. I lost myself in the halls and the imprisoned seas and the statues of Piranesi by Susana Clarke, hiding from the world in her pages, then in Skin by Kerry Andrew, reading for hours. And all the time I try to keep faith with my own work. 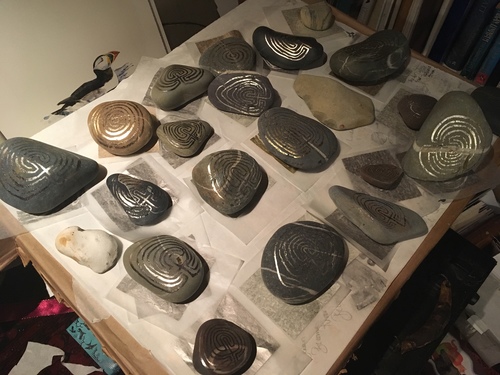 I was rocked a little by an article published in a magazine. I'd like to say it was 'critical' of many writers. I think that was its aim.  But it wasn't really so much critical as, well, rude. More about the personal preferences of the author of the article than the books and writings themself. But it raised doubts in my mind about what I was doing, how it might be perceived and received.

I always think there is a need for criticism. But this kind of writing, which has more akin to trolling  than the criticism it poses as, does little more than silence young writers, those who have new ideas, different ways of thinking. I'm not sure it adds anything, other than a bitter flavour. But it did make me look hard at what I was doing and it did feed the 'imposter syndrome monster' who now and again raises his head. Maybe that's a good thing. Awash for a while in a sea of doubt, then touching ground again, trying to keep faith. Because at the end of the day I can't write for an audience, I can only do the work I do and hope that it makes a connection. 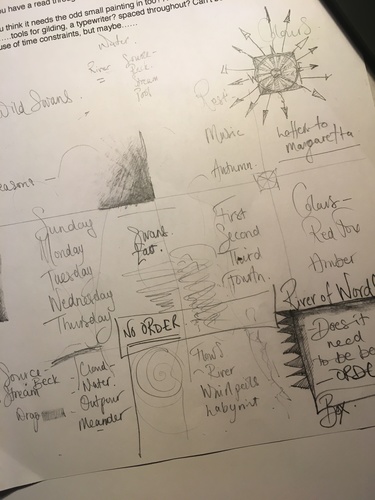 So, back to work, trying to discover how to present this thing that is in a way a perculiar diary. Above is a momentary look at the confusion in my head......

The work needs editing, but that in itself is a challenge as the writing is part image, part word. So I have scanned each sheet and turned it into a pdf, sent it to John, to share with the editor. I printed off a set for me to read through, shuffle and found the perfect place for the manuscript to live. Last year Cathy Fisher bought me an enormous box of chocolates from Chocolader. Perfect! If you don't know them then do take a look. Their gorse flower chocolate is amazing!! But so are the salted caramel truffles.....They are in Cornwall, but do mail order.....and, as I say, their boxes, once emptied ( a thing I am very good at doing!) have good uses. 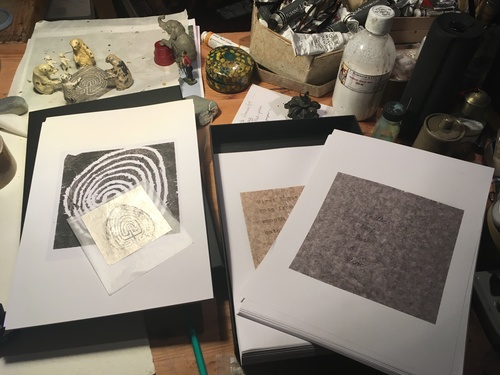 There's something odd going on on my desk.... the bears are definitely up to something, distracting me....

Anyway, I've been wracking my brains about how to get this book into an order. I do remember being in this place with The Space Between. I think I have it now. But there's been a good deal of feeling like I was doing nothing useful in between times. 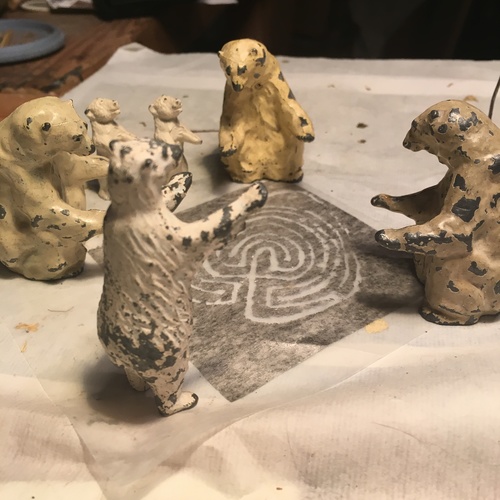 I have also been painting postcard images as an extra pledge point for Feather, Leaf, Bark & Stone. There will be seven in all, only available if the special edition is pledged for, and it is possible to upgrade your pledge to include these. I've done three so far, working on claybord. 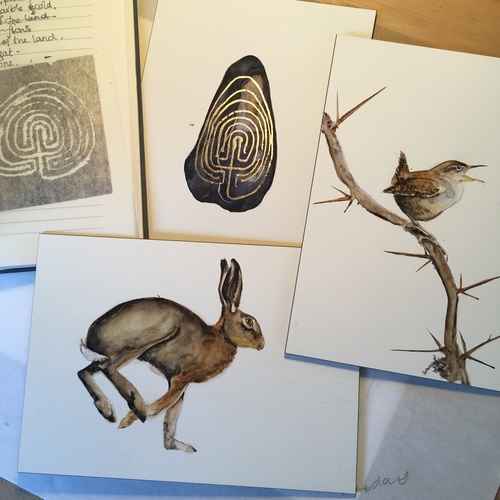 I've a few more pieces to write, then the manuscript, such that it is, will be complete.

I was supposed to be in the Lake District this week working with the Spellsongs group. Although we could have travelled, and the organisers had put in place so much to take care of us, with testing and isolation once there etc, we collectively felt that it would be the wrong thing to do in these times. So this work has been postponed. I can't tell you how much I was looking forward to it. But we are moving forward as best we can, finding ways of working together appart. I miss those guys so much, but am listening and learning from them. One beautiful thing they shared today is this- humans becoming animal. Glorious. We are capapble of doing remarkable things. I love this and hope you will too.

I've been outside a bit, but not as much as I should be. Leaving stones in odd places, sometimes for people to find. This one below has been out for almost a week now, with fresh water tumbling over it. 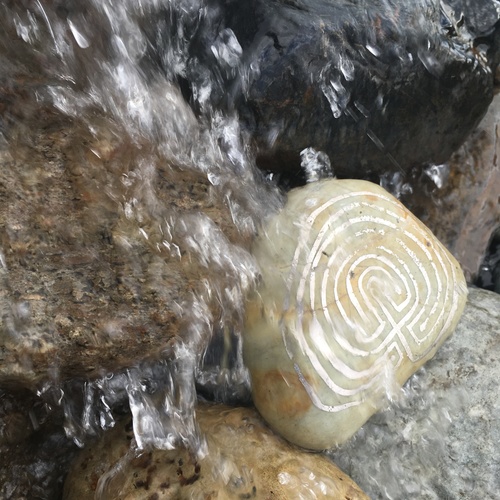 This week I hope to get out more, think clearer, write better, push to finish the manuscript and then immerse myself in birds. That's the plan. 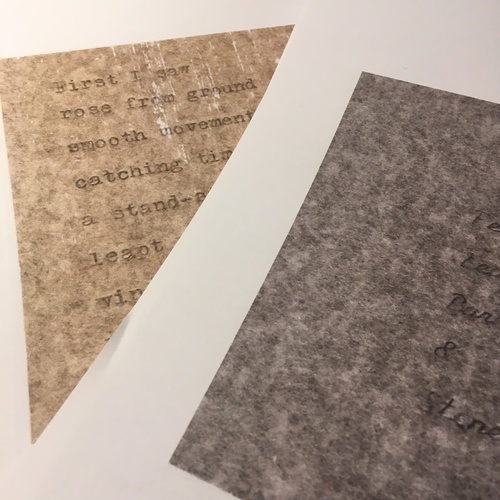 Take care friends. Let's hope for less interesting times.  Tell me, what are you finding, what's helping you through? How are you doing? 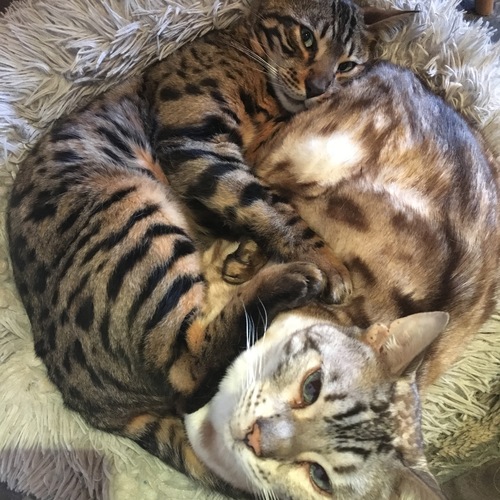 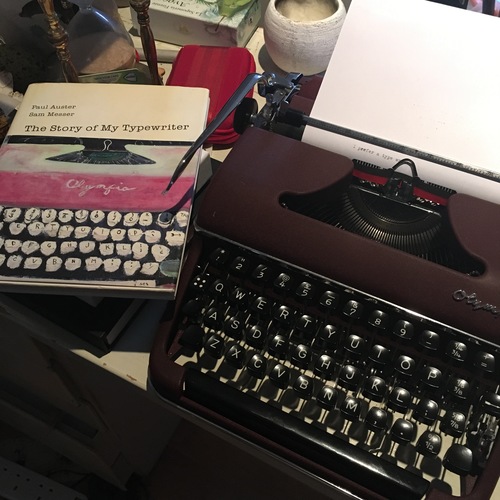 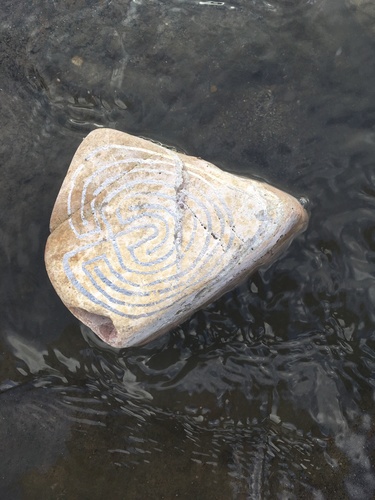 Dear Jackie all of work of any kind seems fraught with self derision, what we don’t say to ourselves is seen in the criticism of others who stand in judgement. For as long as I can remember a sense of imposter syndrome has patrolled my head. This year, like no other, has shown the differences in people which sadly create derision. I have been getting through by writing and illustrating my own book for the first time. The creative process has been a place to get lost, like a meditation. Your wonderful stories and images continue to inspire me and so many others. All around I am discovering people inspired by magic and who similarly connect with nature. Not least today when I met a wild kestrel who became trapped in my chimney! As I opened the window to release him he looked at me and I felt a moment of grateful connection with him which was magical. Was I imagining it? Maybe it doesn’t matter .....

I'm doing... alright, I think. These updates have kept me going a little bit, because recently I've really gotten into prose and poetry more than I ever did when I had to study it in school. And now, school is online and things like this give a welcome distraction from the stress of lessons and homework. Thank you for the work you're putting into this book and these updates. Stay safe, and I wish you good health

Jackie your work, fragments of insightful writing and beautiful photos are at the moment such an inspiration to all of us. Thank you so much. Really looking forward to learning more about the next steps in producing this lovely book.

I think it’s fairly obvious the elephant is drumming for the bears..... some wonderful magic being invoked here.......

I think your work and words and also those wonderful stories by Anne Louise Avery have kept me going in these dark times. It must be difficult imagining other people having doubts and imposter syndrome but they do. I wish I could afford to do more than a basic sponsor but have to be satisfied that I can’t at least I have done what I can. You and others like you are blessed to have such creative talent, ,keep going please. Best wishes, keep well.

I am inspired by your generosity in opening up your heart. Just reading about the experience of another is a support. I love the snippets of beauty in words and image. Just, thank you.
Dont let the imposter syndrome get to you. Stay in touch with the real you, deep within.

I thought 2020 was bad, but 2021 has proved so far to be much worse, I lost my Mum on the 2nd,and the discover from my Cousin, that My Aunt Anne had gone too the following day. I had been speaking to Phillipa, my cousin that day to inform her of my Mum’s demise,and to learn that Anne was frail but was Still with us. My Dad died suddenly not to long ago too. I think they’re all up there somewhere past Cygnus, having a right old knees up, laughing at us left behind. They’re free.Solace has been found in exploring my imagination,and also of gifted Artists and story tellers such as yourself. It speaks to the soul, the spirit and helps me believe magic is real, and beyond everything is magical. So thank you for that.

I love reading your very honest pieces Jackie. Reading an article can completely shake your foundations. Years ago a person came to meet me and find out about my glass work, she was very profit and sales motivated and critical of what I did as not being commercial. I regretted accepting her invitation and it stalled my work for a long time. I can’t undo that meeting though and keep in mind the people that create regardless of outside criticism. I’d love to be more Bjork. Thanks for posting the people becoming animals clip, this was also exhibited at the Wellcome Trust in London and was moving in such a simple way. The ordinary situations, each person alone and the tiny gestures and movements to the birdsong. The clip brought it back most vividly.

The human mind is a mysterious thing. Capable of sparkling insight and observation, love and loss; able to exercise daring creativity. I wish I knew why that same mind was so ready to leap like a reflex from the exploration of a creative project to the dark thought that I’m just kidding myself I can pull this off !
Thank you for sharing your thoughts which are our thoughts often too - the load is lighter and the possibility of success clearer when we encourage each other. Your work is an absolute joy (I’m new to it) and I share your spiritual connection to the natural world around me. Your words and images are so uplifting in the current challenge. I sat on a very cold Scottish beach this week, painting, when I locked eyes with a seal in the water. He/she studied me as long as I studied him/her, a communion which stays with me.