Covers and other things. 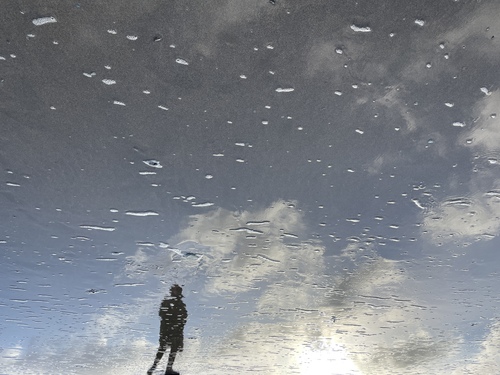 The image above is how I feel at the moment. The thing I love about images is that they are more open to interpretation than words, which pin things harder to a page, sometimes.

I'm sorry it has been so long since the last update. There has been amazing progress on Feather, Leaf, which is now heading off to the press. And I have been so busy, working on this, The Accordion Books, The Book of Birds and more that I can't yet speak of. My time at home has been clearly focussed on working with paper, and I have painted so much, but never enough. But first. This, below, is the front cover for the subscriber's edition of Feather, Leaf. 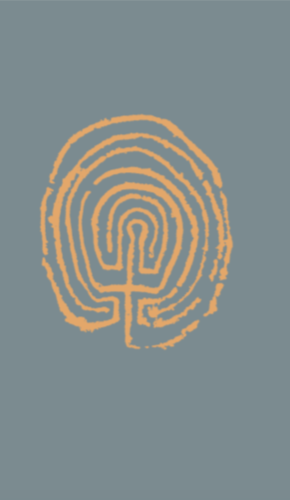 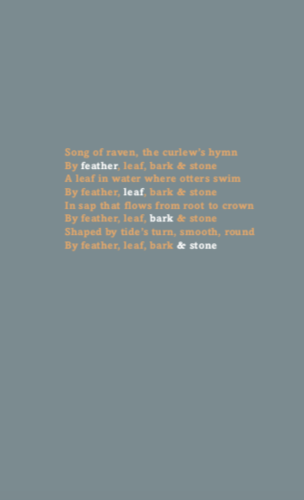 And this, above, is the back cover. My desire was to create something that, if you wish, you could remove from the book and frame. The colour echoes the beautiful blue stone at the end of Whitesands Beach. The book will go to press now, and be launched in June and before then I will go to the warehouse and sign the books.... no more bookplates if at all possible. 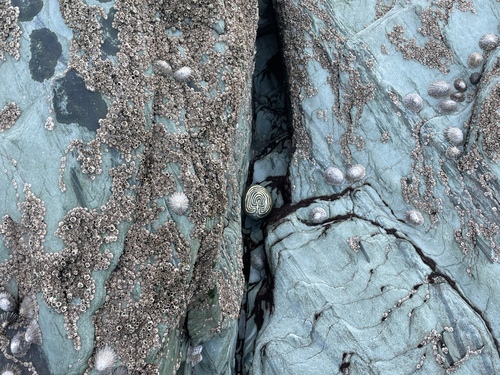 In the time between this and the last update much has happened. We managed to finally take the Spellsongs on the road after much soul searching and number crunching. And it was a moving experience. Because our management team realised that there will be many people who couldn't come, who wished to, for health reasons and more, they hired a film crew to film the show at Birmingham. It's supposed to be a secret I think, until Wednesday. They didn't say before the tour this would happen, as things can go wrong, so they wanted to make sure the film was in the can before announcing it. ( Indeed, even when we set off things went awry. A gale put paid to the performance at The Sage, pulling up a panel on the roof of the venue and causing the Sage to be closed) It's a beautifully made film with sound mixed by Andy Bell, gorgeously shot, intimate, and I think brings out a good deal of the live atmosphere. 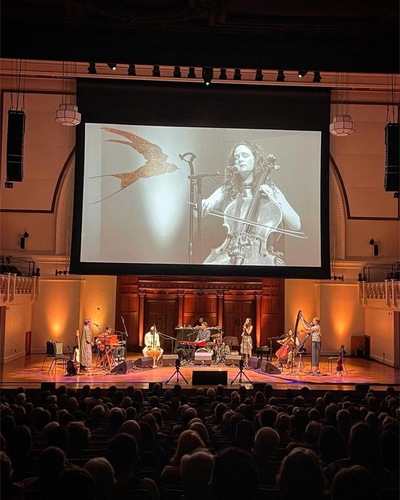 What else can I tell you? Although my focus is on birds I have been squeezing in the odd painting. I have new prints coming soon from Aquarelle. And I am having an exhibition of my paintings at Druidsden at the Druidstone Hotel, in Pembrokeshire ( hopefully from next week.) These will be a mixture of paintings from East of teh Sun, Ice Bear, Lord of the Forest, Nursery Rhymes, a few prints and who knows what else...... hanging them over the next few days and then it is back to work for me. I will try to post photos as the work goes onto the walls. Hoping to take over most of the hotel. It's a beautiful place, relaxed, calm. If you want to go and see it will be a good idea to phone ahead. 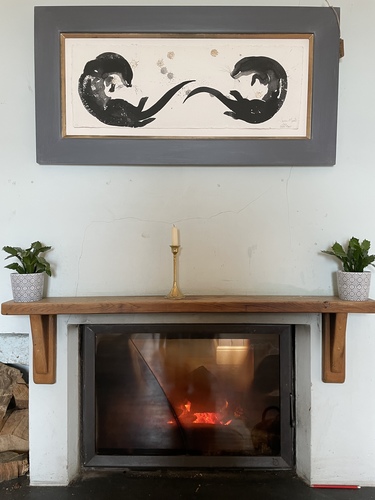 I've a new series of prints beginning. This one is about time and more. Watercolour and gold leaf and the original will be available through Seven Fables, Dulverton. 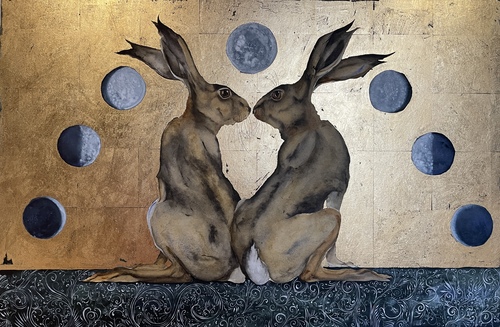 I've many other secrets to tell also, but for now they remain secrets. Hopefully there will be time for more updates. I will try to get photos of the book on the press. I will continue to play with stones, to draw, be creative in the face of all the chaos in the world, for though it may seem like a luxury to some, it is a necessity to others and for me creativity is the antidote to despair ( dictionary definition; the complete loss or absence of hope).

Look after yourself and be kind. 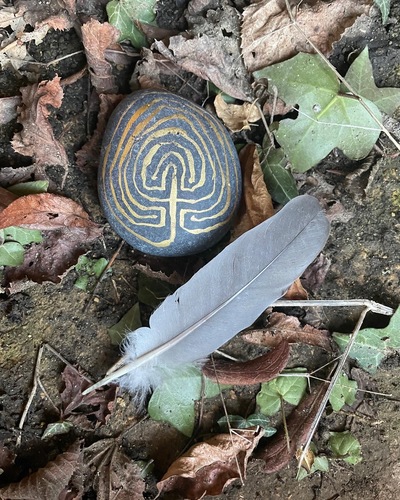 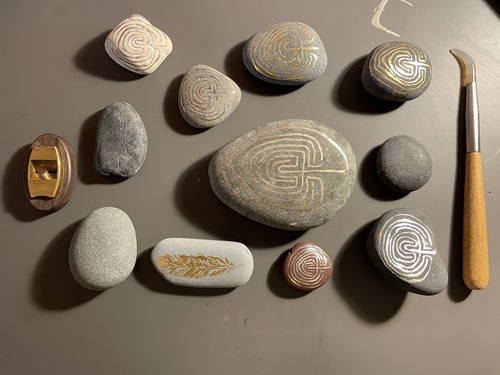 I was given some brushes that belonged to a sign writer. They all need cleaning, but many are sable, so worth the effort. But they sent me off researching. The brushes are from teh 1960's, so almost as old as me, but the company who sold them still trades and I bought some leaf from them.

Also, I have two things for sale for Little Toller and Bluemoose books fundraising campaign to gather packs of hope for refugee children. The first is a copy of The gifts by Liz Hyder that I have gilded, a feather on the dust jacket and one on the cover beneath. Also included are the fragile fragments of gold. This is £200. 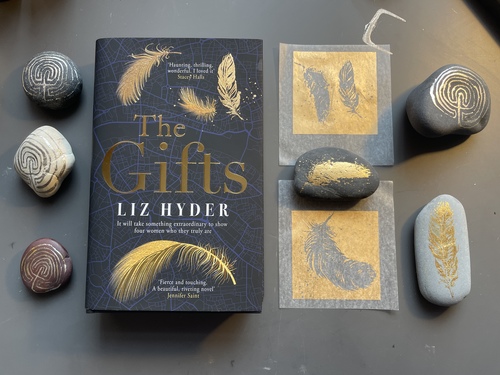 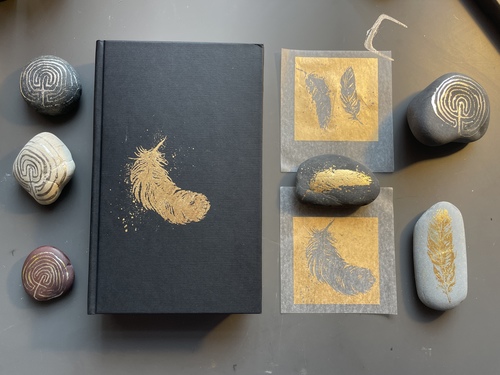 The second is a gilded cd of Spellsongs, which also comes with its fragile gold fragmments and both the cd sleeve and the fragments could be framed. This is £350 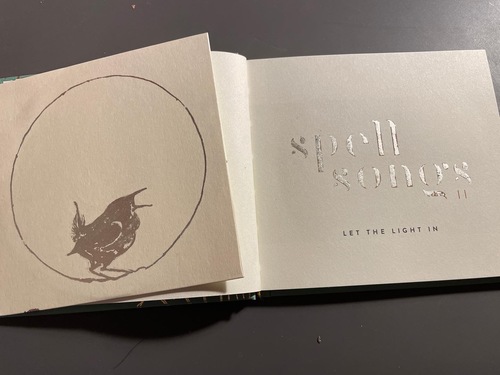 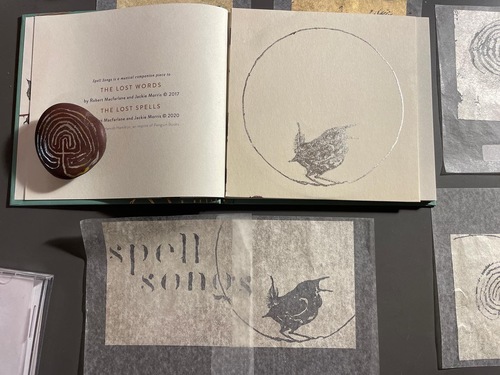 To secure either of these pieces drop me an email at jackie@jackiemorris.co.uk All the money will go to the #PackedWithHope initiative from these two mighty indie publishers.