How what scares us, makes us. 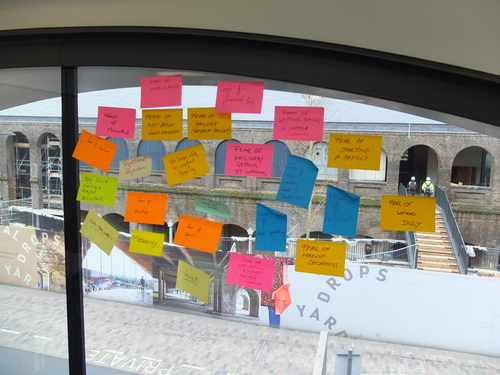 Fear Hacks are happening up and down the land and the book is now well on the way. We are now fully funded and we have so much more! The manuscript which a few of you have helped with has been submitted and is being reviewed by the unbound team. And, we have an editor – Miranda - who is now reading my manuscript.

So, Timeline. Editing, designing the cover and the print process takes a while but we are planning on a publication date in mid-January (2019). Hopefully we will have review copies well before that and are aiming to get copies out to supporters before then also. We are on a relatively fast-track in the book publishing business.

Events: I’ll be on stage at the Idler Festival at Fenton House this Saturday (14th July) and at the Byline Festival in late August where I’ll be doing a Fear Hack Workshop. As we get closer to January and into next year I’ll be doing more events and if you have any suggestions or ideas - these can be local things - let me know. This book will only get out there because of the things we do and those we entice in.

Ideas: At the amazing 10th Anniversary Do Lectures last weekend, Tina Roth Eisenberg gave me an idea for Fear Hack - to make it more fun and crucially into a game that she could play with her friends. I like this idea and I’m going to do it. No idea what it’ll look like yet but if anyone has any ideas or wants to help, please let me know.

As Fear Hack grows it gets clearer what it wants to be. This is now a project to completely reframe fear. I am even going so far as to say that the big hairy possibility here is to end fear (as we know it) completely. How would the world be if we could do that?