The UK's best selling tattoo magazine, Skin Deep, very kindly ran a feature on my book in their February edition. Unfortunately they don't have an online version, but you can read the interview (and see some of the pictures) below. 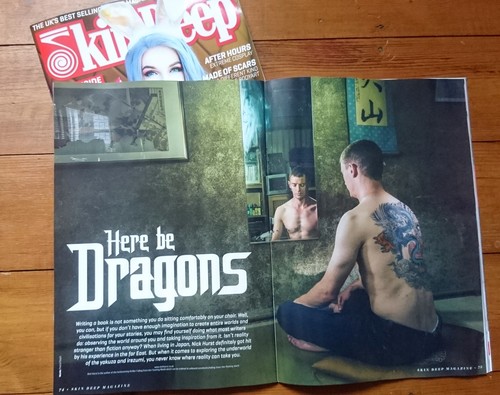 You are just about to publish your latest book which takes place in Japan. Can you tell us about the plot?

It's a Tokyo-set thriller about an Englishman, Ray, who goes to Japan hoping to start his life afresh. Things begin well when he finds a job and a beautiful girlfriend, Tomoe, but then unravel when her father is found dead.

Ray's reluctant to join the hunt for her father's killers but when Tomoe goes missing he’s forced to act. He's quickly pulled into a perilous world of yakuza gangsters, corrupt politicians, tattooists and call-girls that echoes his dreams of Tokyo's feudal past.

Soon he's not only searching for Tomoe but is fighting to save his own life.

How connected is the tattoo topic in this project?

During the course of the story, one of the characters is forced to become an unlikely member of the yakuza. As part of this he's made to get a tattoo.

There are only two scenes in which tattooing actually features but both they and the tattooist play a central part in the book. This is partly because they reveal clues that help unravel the plot, but also because (I hope) they are amongst the most captivating in the book.

During the course of your research for this book you decided to get tattooed, why?

I’d thought on and off about having a tattoo since I was a teenager but never came up with anything I felt was personal enough to wear for the rest of my life. However, I was faintly aware of Japanese tattoos from when I’d first lived in Japan and when I found out about the connection with woodblock prints it made me think I’d found what I was looking for: it linked to my love of these prints and tied into a very personal project - my book.

The fact I could mimic the tattoo the character in the story gets made it seem perfect - a bit like life imitating art imitating life (although hopefully not as pretentious as that sounds on the page!).

How do you feel about this first tattoo?

Anyone who has one will know the experience of getting a first tattoo creates intense emotions and memories. The fact I was first tattooed in a completely alien environment (a traditional Japanese tattooist's studio) made mine especially strong. I hope that by including my experiences in the book I can convey them in a way that allows readers (and particularly tattoo fans) to live through them too.

How striking was it to get?

The first part of it - getting the outline to the dragon - was exciting and I couldn’t have been happier at the end of the session. It was only after my second appointment that I questioned what I’d done - having initially had it in my head I might have a design take up about an A5 sized piece of skin I became very aware that most of my back was going to be covered.

But after recovering from the shock I couldn’t wait for each new session to see the tattoo grow and look more incredible every week. 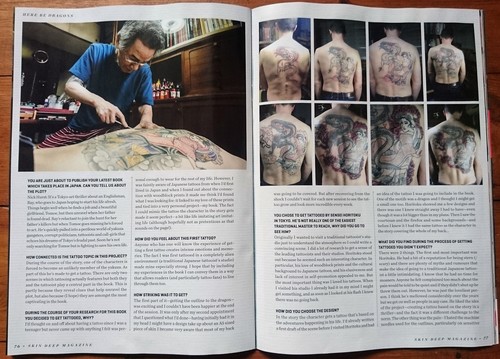 You chose to get tattooed by Sensei Horitoku in Tokyo. He's not really one of the easiest traditional masters to reach, why did you go to see him?

Originally I wanted to visit a traditional tattooist's studio just to understand the atmosphere so I could write a convincing scene. I did a lot of research to get a sense of the leading tattooists and their studios. Horitoku stood out because he seemed such an interesting character. In particular, his love of woodblock prints and the cultural background to Japanese tattoos, and his elusiveness and lack of interest in self-promotion appealed to me.

But the most important thing was I loved his tattoos. When I visited his studio I already had it in my mind I might get something, and as soon as I looked at his designs I knew there was no going back.

How did you choose the design?

In the story the character gets a tattoo that's based on the adventures happening in his life. I'd already written a first draft of the scene before I visited Horitoku and had an idea of the tattoo I was going to include in the book.

One of the motifs was a dragon and I thought I might get a small one too. Horitoku showed me a few designs and there was one I knew straight away I had to have - even though it was a lot bigger than in my plans. Then I saw the courtesan and the firefox and some backgrounds - and before I knew it I had the same tattoo as the character in the story covering the whole of my back...

What did you find during the process of getting tattooed you didn't expect?

There were 2 things. The first and most important was Horitoku. He had a bit of a reputation for being stern (/scary) and there are plenty of myths and rumours that make the idea of going to a traditional Japanese tattooist a little intimidating.

I know that he had no time for moaners. Anyone he felt complained too much about the pain would be told to be quiet and if they didn’t shut up he threw them out. However, he was just the loveliest person.

I think he's mellowed considerably over the years but we got on well as people in any case. He liked the idea of the project - creating a tattoo based on the story in a thriller - and the fact it was a different challenge to the norm.

The other thing was the pain - I hated the machine needles used for the outlines, particularly on sensitive areas of my back. But I found the hand-poking process mostly quite relaxing and even fell asleep while I was being tattooed once.

After this experience, would you be tempted to go further than the character of your book and keep getting tattooed?

Yes! I actually got a top up of a couple of maple leaves you can see Horitoku hand-poking in the trailer video for my book. My design doesn’t fit into the traditional Japanese types of tattoo body coverage such as the arms and chest, or the full back and buttocks, so if I was to live in Japan again I’d be very tempted to fill in the gaps…

But apart from thinking there’s wasted ‘canvas’ space lying idle, I miss the sense of anticipation of what would come in the next session, and the excitement of looking in the mirror after Horitoku had called time for the day.

So perhaps it’s best I’m not living in Japan at the moment - I might get carried away and I’m not sure my wife would appreciate the full bodysuit this could lead to if I went back. 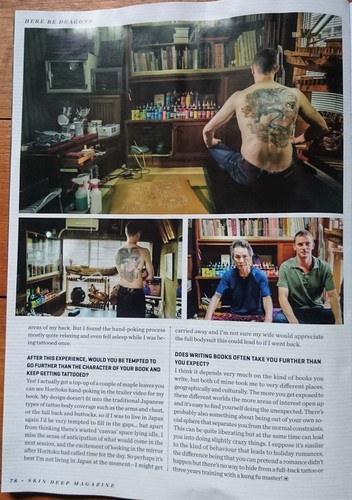 Does writing books take you further than you expect?

I think it depends very much on the kind of books you write, but both of mine took me to very different places, geographically and culturally. The more you get exposed to these different worlds the more areas of interest open up and it’s easy to find yourself doing the unexpected.

There’s probably also something about being out of your own social sphere that separates you from the normal constraints. This can be quite liberating but at the same time can lead you into doing slightly crazy things. I suppose it’s similar to the kind of behaviour that leads to holiday romances, the difference being that you can pretend a romance didn’t happen but there’s no way to hide from a full-back tattoo or 3 years training with a kung fu master!