A compendium of the strangest, most shocking, hilarious and captivating facts and anecdotes from all of Gaming!

Good News Everyone, The Book Exists!!! 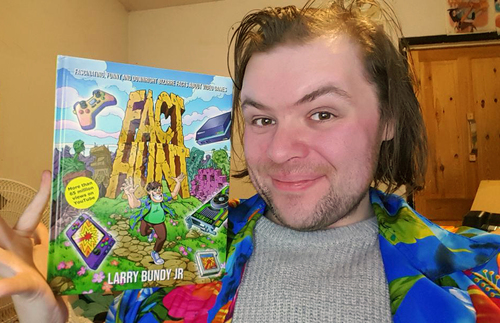 Yup, after all this time, we're on the final straight with the book and they'll all be winging their way to you shortly,  and for anyone who pledged for a signed copy, I'll be going up to Unbound's warehouse next week to sign over 500 of them,  so they'll be with you very soon too.   I'll snap some update photos too for good measure.

In regards to backer pledges, a couple of things really, those of you who backed the poster level, it suddenly dawned upon us that we never actually asked which poster you would like.  So we felt out of fairness, we'll send everyone who backed that level all three designs.

And in regards to everyone who backed the game level that I did the box art too,  sadly we can't get hold of any copies of Smart Mouse,  the publisher's license for the game expired and isn't allowed to print any more copies.  So to anyone who ordered all three games,  as an alternate we'll be sending you a Mega Drive/Genesis copy of Switchblade instead.  It's a game I've mentioned about in the Fact Hunt YouTube show a number of times.  It's the game that ZOOL was originally meant to be the sequel too.

Here's the link to the episode:

It's a great pseudo-MetroidVania type game (as in it feels like a metroidvania game, but isn't), but wa spreviously unreleased on the console before.   Infact the only console it had previously been released on was the Amstrad GX4000 but I think you'll really enjoy it (it's actually a much better game than Smart Mouse truth be told)  But anyone who did solely back the Smart Mouse pledge (I believe it's Games Level 2)  you'll also recieve a copy of Switchblade,  but if you would like a copy of Sumo Slam or Generals of the Yang Family,  please let us know ASAP.

Once again,  thank all of you who made this book a reality, you made a dream come true and I will be eternally greatful for what you have done for me.   Thank you!!!

oh that's great... Umm i kinda messed up postal code for shipping is it still possible to fix it?

Love the page in the signed copy. Thanks kindly.