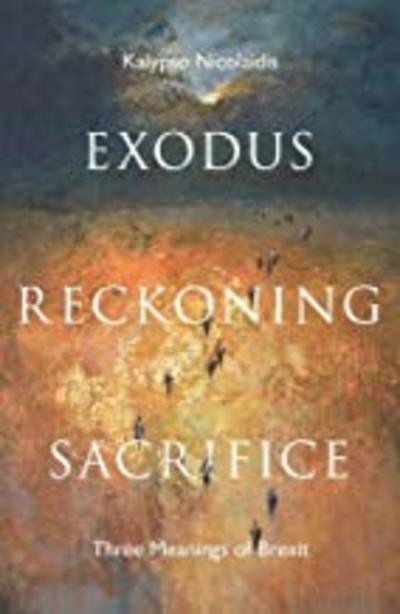 In this saga through Brexit mythology, Kalypso Nicolaidis asks what 'means' means in “Brexit means Brexit.” She offers a plea for acknowledging each other’s stories, with their many variants, ambiguities and contradictions. And in this spirit of recognition, calls for a mutually respectful, do-no-harm Brexit  - the smarter, kinder and gentler Brexit possible in our hard-edged epoch of resentment and frustration.

The pamphlet offers a different kind of take on Brexit seen through the lens of archetypal myths. It was inspired by conversations with friends and strangers on all sides of the Brexit saga, with my British husband and my European children, as well as by echoes of a Parisian childhood steeped in Greek mythology. It developed as I was asked about the other side's views on each side of the Channel before and after the British “No”.  My friend Anne calls it ‘your three screams,’ perhaps because Brexit feels very personal to me (I know, I am not the only one!) as does the failure of the Europe project to live up to its stupendous promise (I know, they try hard!).

It takes the reader on a journey through three mythical themes to contrast different understandings of the whole affairs by different people in and outside Britain: leavers vs remainers, leavers vs other leavers, young vs old, cynics vs idealists, Europeans and non-Europeans. My hope is that these myths can be used as a shared language in which to conduct a conversation, short of the expectation that we can ever agree, but in the hope that we can at least enter a spirit of mutual recognition as we confront our experiences and visions of the world.

‘Exodus' makes Brexit a story about British exceptionalism, therefore both a British problem and a testimony to the EU’s incapacity to accommodate exceptions.

‘Reckoning’ brings the story back to the EU’s shores, with Brexit a harbinger of terrible truths which we dump together under the easy label of euroscepticism.  Oedipus, who blinded himself to finally face his truth serves as the quintessential reference here.

And while the third story of ‘Sacrifice’ is often told in the classic idiom of heroic sacrifice I prefer the more ambiguous story of ironic sacrifice whereby Brexit demonstrates that it is precisely because you are free to leave that you should not. Here the ultimate irony would be that after and perhaps because of Brexit, the EU truly comes to live up to the pluralist ideals that define both the best of Britain and the best of Europe. Most importantly in our modern world, every version of these stories has variants and ambiguities which open up spaces for our democratic debates. And every version of these stories can be interpreted through the lenses of the do-no-harm imperative which I hope will come to pervade the future negotiations and relationship between sides which will always remain after all intimate partners.

As she puts the finishing touches on the book, Kalypso welcomes you to make comments and contributions (in the below Q&A section) that might inspire yet more variants and interrogations around the mysterious meanings of our collective myths and their relevance for our democratic conversation.