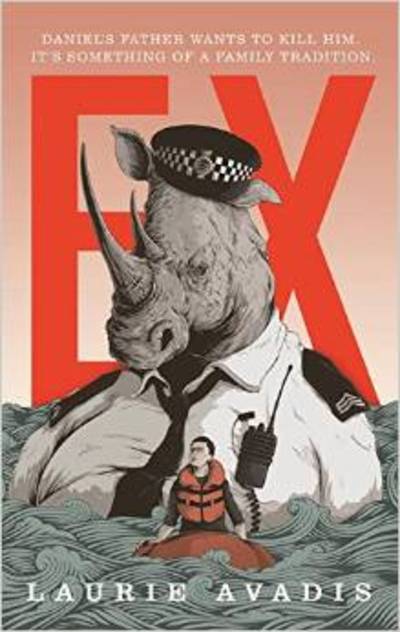 Daniel’s father wants to kill him. It’s something of a family tradition.

Luckily, he’s a survivor. But with his thirty-two stone psychotic police sergeant father concocting ever more obscure methods of killing him, Daniel needs to find a way to save himself. Unfortunately for him, his mother isn’t of much help – she’s abandoned the family home to live out her life as a mermaid. School offers no respite, either – the school bully, Dorsal Grellman, is an eight year old that looks like an elephant on steroids, and he’s made torturing Daniel his daily project.

But after Daniel makes friends with Ferris, a brilliant but irritating genius who manages to befriend Dorsal, the three embark on a journey to discover the source of Daniel’s father’s rage, reunite his family and find a place for themselves in the world.

Ex is black comedy like you’ve never read it before. An imaginatively absurd, fantastically vivid account of one boy’s day-to-day struggle to avoid annihilation. It takes you on a voyage down the Thames on the world’s largest and most deadly wooden potato. Along the way you’ll meet an outrageous array of characters: from a flock of swearing ducks to a cappuccino-swigging lion, a grandmother with a predilection for murdering superheroes to the world’s least successful hostage negotiator.

Ex is one of the wildest, funniest, and most violent books you’ll ever read – it makes Kill Bill look like Toy Story. If you’re squeamish, stay far away, but if you’ve ever laughed at others' misfortune, or relished a moment of gratuitous, unnecessary violence, then this is the book for you.

Despite its violence and its humour, Ex is a book which carries at its heart a message of hope for children who face and overcome incredible adversity. That’s why the author has decided to match pledges with donations to Shooting Star Chase Children's Hospice.

Shooting Star Chase is a leading children’s hospice charity, caring for babies, children and young people with life-limiting conditions. Whether lives are measured in days, weeks, months or years, staff of the hospice are there to make every moment count, support families from diagnosis to end of life and throughout bereavement with a range of nursing, practical, emotional and medical care.

Their support is free of charge to families and available 365 days a year. But it costs £9.5 million a year just to maintain their current level of care and with only 10% of that income coming from government funding they rely on their supporters’ generosity to keep the service running.